Written by JediJeff at 5:15 PM
A couple days before I bought that box of Star Wars High Tek, I had stopped at my LCS because they got in Archives Signature Series. I had never bought one in the past, but the checklist of autos for the product is really low - just 67 guys. I figured the chances were far better on pulling a decent auto than spending the same money for a pack of Tribute where I might get someone currently in the league I have little desire to add to my collection. 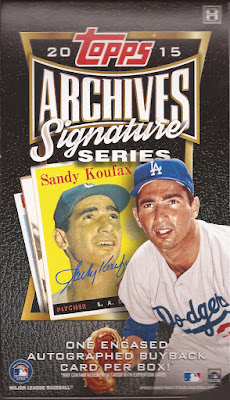 Normally I am not a high end, "going after the hits" card buyer, but I just wanted this one. And when I saw the price my LCS was selling it for (a few bucks UNDER everyone online at the time), well, I ponied up the debit card and removed the plastic wrap from a box. From what the guys at the shop were telling me, a lot of Mets were coming out of the boxes being opened. 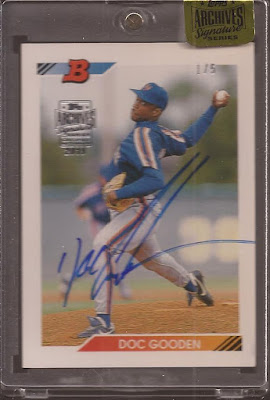 I added my name to that list. I cannot complain at all on my pull. All the autographs are on card. There are a couple redemptions in the boxes, but for the most part you will have your encased card in hand. As you see, I have a nice 1992 Bowman buyback of Doc Gooden, numbered 1/5, so a very low number buyback series. Do you care about the back? 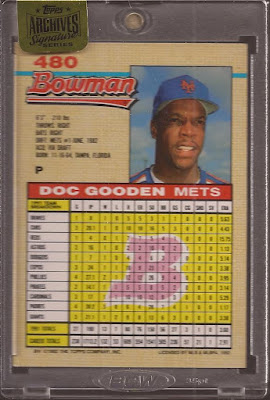 I'll show it. Nothing is done to the back of the card by Topps. Just the foil stamping to the front that shows it's from the Signature Series, the serial number and the player's autograph. Notice it's no a screw down but a BCW magnetic case. Like I'll ever open it, but still.

I might buy another one of these as well. Let's see if Santa makes that happen.

Not a bad pull at all.

Wait, so a box is actually just one card? I'll never understand this stuff.