Written by JediJeff at 6:17 PM
We are a couple months out from season 6 of Game of Thrones. If you aren't watching it, find a way to view the episodes. Whether via your local video store, an HBO subscription or other ways, it's a good watch. I while back I picked up a couple packs of GoT cards from Target. I think they were in their clearance box of card packs. 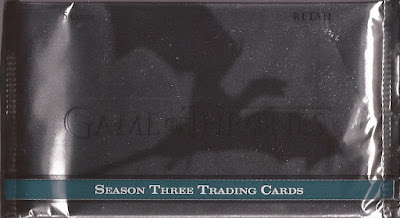 Very, very silver, with just a silhouette of a dragon on the cover. It's have to make up, but it reads "retail" in the upper right. There are sketch cards, autos and relics possible - harder pulls in the retail product of course. Rittenhouse picks up a lot of the movie and TV show licenses. How did they do with the world of GRRM? 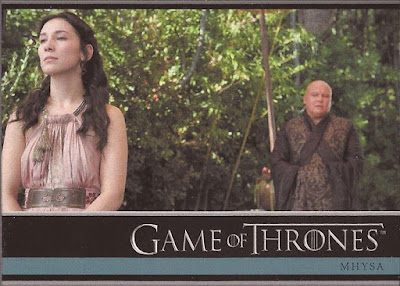 Simple layout, as is the case with Rittenhouse. Based on the show/movie, they take the time to make the card design fit the theme. You get a scene from the show. Lower right is the episode name - Mhysa was the final episode of season 3. Here, Shae and Varys are talking about a commonality between them. 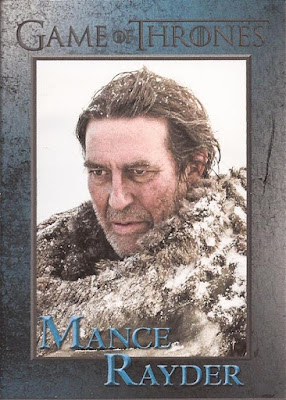 Character cards are part of the set. Here we have Mance Rayder, the king beyond the wall. 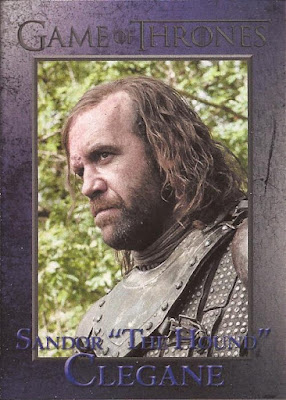 The Hound. I don't think (spoiler) he's dead when Arya left him after his fight with Brienne (end spoiler). I was going to post the back if the card, but there is a bit of a spoiler on it. Not huge, but enough that if someone reading this is planning to watch the show, it would be best not to view. 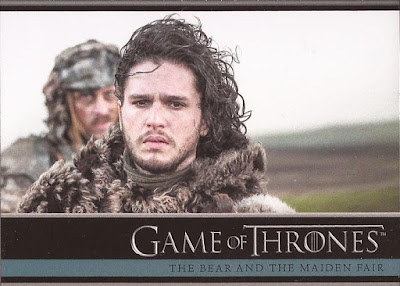 Back to the scene cards. Here we have Jon Snow in episode "The Beat and The Maiden Fair". 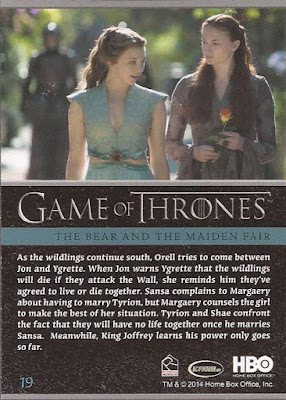 Here is the back of a scene card. I don't think that paragraph spoils anything, so I am leaving it. Plus, you have a picture of Margaery Tyrell, played by Natalie Dormer. 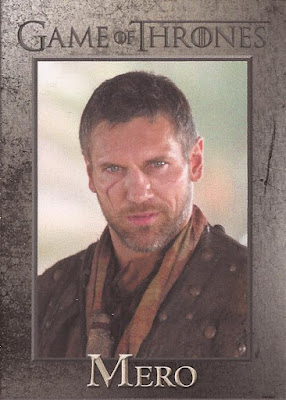 No hit. Last card is Mero, a minor character from season 3. His character had little to do witht he season, so let's just have another link to Margaery Tyrell.