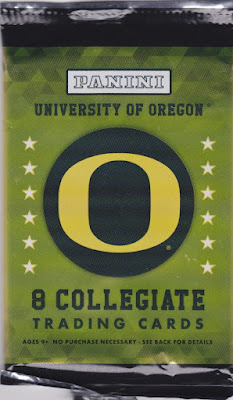 So this is fun! Here's a pack of nothing but Oregon Ducks cards. For Ducks fans, it doesn't get much better than this. For fans of pretty much every other school on the planet, you're out of luck. Enjoy? 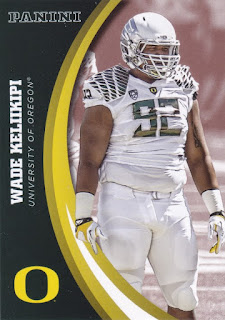 44 - Wade Keliikipi - Keliikipi was a defensive lineman during the peak Chip Kelly years, and spent some time on the Eagles practice squad when Kelly became the head coach there. It's worth nothing that this is a small set (49 base cards with a lot of filler) and Panini seemed to be limited in scope for who they could include (only active players, basically.) 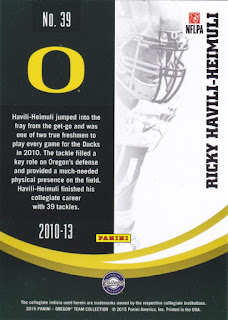 39 - Ricky Havili-Heimuli - Another D lineman who played under Chip Kelly and has hung around on some practice squads. 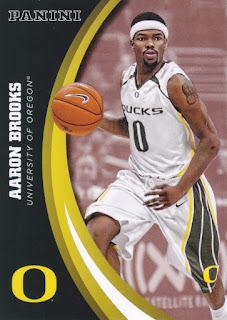 36 - Aaron Brooks - There are a few basketballers in this set, but Panini was clearly limited to only those players who are covered under their NBA license. Brooks was one of the top players of the Ernie Kent era and has carved out a pretty nice pro career for himself. 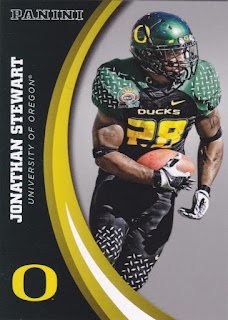 24 - Jonathan Stewart - We last saw J-Stew limping in and out of the Carolina huddle during the Super Bowl last month. He was amazing to watch in college and has bucked the recent trend of pro running backs only lasting a few seasons in the NFL. 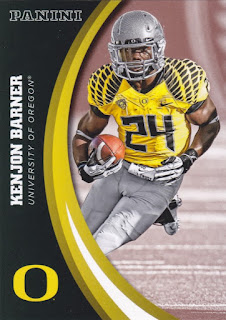 28 - Kenjon Barner - Barner was essentially the 4th option in a crowded Philly backfield last season, but he got a few opportunities as some nagging injuries began to accumulate. 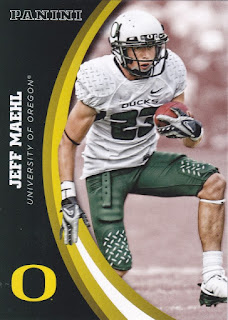 23 - Jeff Maehl - Maehl switched sides from the defensive backfield to a career of catching passing, often dramatic ones, during his time at UO. As a pro, he caught just 9 passes in 4 seasons with the Texans and Eagles. 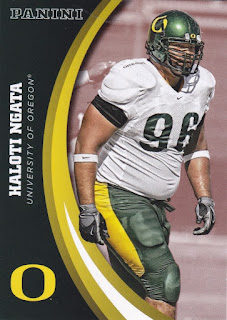 18 - Haloti Ngata - Ngata has been around long enough that here's documented proof that Oregon didn't always wear crazy uniforms. He played for the Lions last season after a long career with the Ravens and appears to be staying in Detroit. 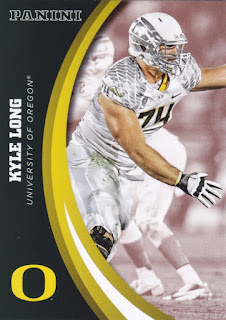 30 - Kyle Long - Long may be best known for being the younger brother of Chris Long (and the son of Howie, obviously), but he's made the Pro Bowl in each of his 3 seasons in the NFL. Kyle only spent one season with Oregon as a transfer.