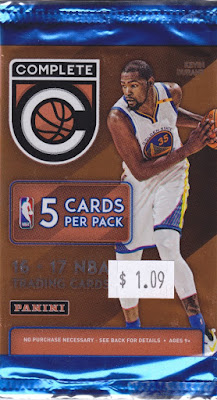 The next stop on the tour of Panini's current NBA releases takes us to Complete, which is essentially their take on Topps Total. There's a large checklist, a low price point, and a toned down group of parallels and inserts. You only get 5 cards per pack which lessens the impact of the low price point, but there is something satisfying about being able to rip into a pack of cards for a buck. 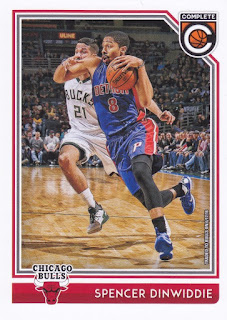 40 - Spencer Dinwiddie - First impressions? These cards are more substantial feeling than last year's. The 2015-16 offering resembled mid-'90s Fleer baseball in their flimsiness, while these are a bit closer to Panini's Hoops line, minus the gloss. 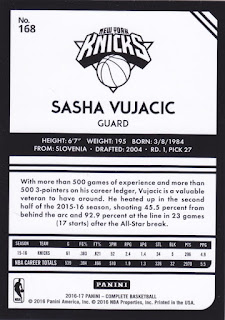 168 - Sasha Vujacic - The backs are very basic as you might expect. Black and white all the way. 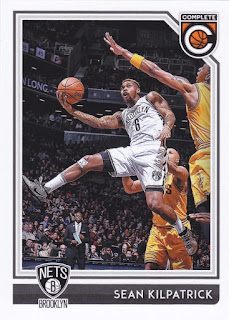 213 - Sean Kilpatrick - Kilpatrick is a guy I had never heard of but ended up on my fantasy team this year, where he sort of exists in a state of fantasy purgatory -- too mediocre to escape the scrutiny of being sacrificed to the waiver wire, but too healthy to ultimately be dropped. 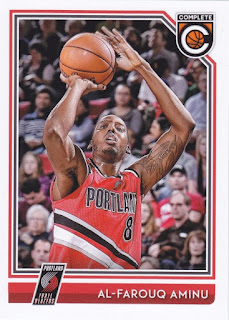 359 - Al-Farouq Aminu - I'm not a fan of their current red jerseys, but I'm a big Blazers fan, so pulling this card of the Chief was good for me. 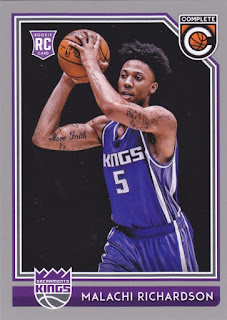 156 - Malachi Richardson Silver - Each pack (on average!) has a non-base card inside, and mine was the most common parallel version of this rookie guy.

Kilpatrick was a late season D-League call up for the Nets last season...and ended up becoming one of their best players. He scored 38 points in a game this season. His card is my #1 most wanted in the set.

If you don't know any Kings collectors, can you set Malachi aside for me? He's a Syracuse guy and would be cool to have a card of him.

Billy: Any Kilpatrick cards I pull will end up headed your way at some point, along with his Nets teammates. Unless you change your address and don't tell me.

The Lost Collector: Malachi is all yours!