Written by Kin at 3:24 PM
The best thing about Upper Deck's yearly flagship release is that we as collectors know what's coming.  We will get a simple design, great photography and Young Guns.  It's refreshing that while the hobby is all about hits, there is still a demand for a set not reliant upon them.  While there are jersey, numbered and other insert cards, they aren't the focus. 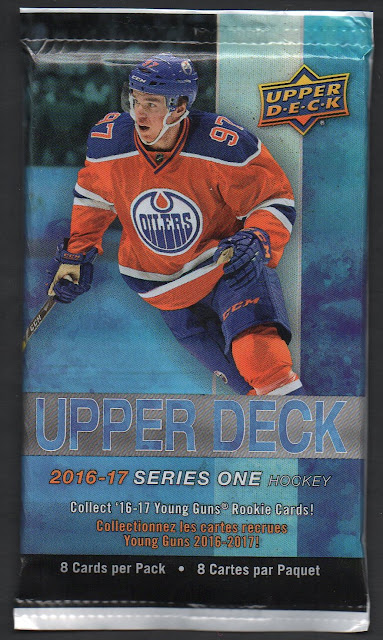 I opened a box of this shortly after the release but picked up a pack at Target for this post.  At this particular Target, I have seen pack searchers.  One of the beauties of this product is that while they can weigh or pop the end of packs looking for jersey cards, the most desired cards are just "regular" cards.  Even in the retail product, the Young Guns odds are still good.

When Upper Deck first released images of the design, I was excited.  The tone of blue used reminds me of the 1992-93 Fleer Ultra set that was one of my favorites as a kid (NOTE TO SELF: Go look for 1992-93 Fleer Ultra boxes on eBay).  I saw more than a few comments and tweets from collectors that weren't excited, but we all know how negative some collectors are.

I love the clean designs that Upper Deck uses on the flagship product.  It does not overtake the fantastic photography seen yearly in the set.  Like the fronts, the back design is clean and exactly what we've come to expect from Upper Deck, as you see on the Ales Hemsky card from my pack.

Since moving to Fort Worth, I've watched at least 50 Stars games a year (the wifey is a Stars fan).  I learned something from this card back.  It was a shock to me to see that in the first two years Hemsky was here that he scored 24 goals.  It certainly didn't seem like it.  He was injured during the 2016 World Cup of Hockey and has only played one game this season.

It's not going to work out this way for all teams, but the way the design color meshes with the Oilers colors on this particular Benoit Pouliot image makes for quite the aesthetically pleasing card.  Pouliot has appeared in 44 games so far this season, tallying five goals and five assists.


This Gabriel Landeskog card is another example of the blue design complementing the image.  The 24-year old Avalanche captain has scored nine goals and seven assists in 34 games this season.

Through 49 games this season, Andrew Cogliano has produced ten goals and eleven points on the season.  So far in the pack, this is my least favorite of all images.  It's not that it's bad, it's just "average" and the others have been solid.

For almost as long as I've liked hockey, I've disliked the Detroit Red Wings.  About the only thing nice I can say about them is that I like Justin Abdelkader's name.  I also like that a local boy (from Muskegon, MI) has played his entire NHL career for his home team.  In 28 games this season, he has produced four goals and ten points for the Red Wings.

I hadn't realized until just now that the soft blue used in this set is basically the same shade of blue used in the goal crease.  Check right behind Abdelkader's knees on the card.

The Maple Leafs aren't shying away from their youth movement and after just eight games (and one assist) this season, Peter Holland was traded to the Arizona Coyotes.  Since the trade he has played 17 games, tallying a goal and four assists.  One of his final cards picturing him with the Leafs was a good looking one.

More than any other sport, hockey cards have the ability to picture fans on a card.  That's what I love about this T.J. Brodie card.  How cool would it be to open a pack of cards and see YOURSELF on a card?  What if years down the road, we find a young image of a future NHL star, like on this card?

Back to the actual subject, Brodie has scored three goals and 14 points on the season for the Flames.

Unfortunately I didn't hit a Young Guns card.  For those that don't collect hockey, this is what they look like. 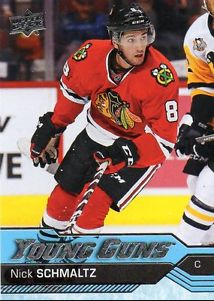 I hope you enjoyed this look at this pack.  It was successful for me, because I needed three cards from this pack for my set!  You can follow A Pack to be Named Later (@namedlater) and me (@beansbcardblog) on Twitter.  Also, please check out my personal collection blog, I Feel like a Collector Again.  Happy (pack) ripping!

You have earned yourself a '52 Mantle for that statement.

I just busted a retail blaster of this a few minutes ago, my first cards of the current season. I really like them. As the flagship set of my first year with hockey these will probably always be "special" to me.