Written by Kin at 9:06 PM
I've always been of the "don't leave the last pack" philosophy, so when I was at a local shop a few weeks back I picked up the last pack of 2016-17 Upper Deck Artifacts.  I almost passed on it because of the $13 cost, but decided to go for it. 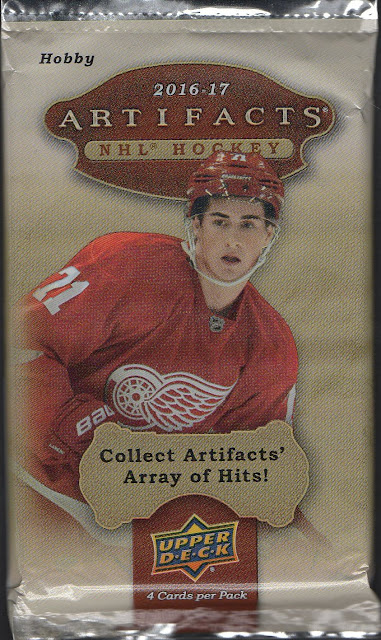 Per Beckett.com, this is the breakdown of what you get:

WHAT TO EXPECT IN A HOBBY BOX:
– Three autograph, memorabilia, or Aurum cards
– Four serial-numbered cards
– One Rookie Redemption

Gustav Nyquist will always hold a special place in my heart.  I pulled his Young Guns High Gloss (#d/10) shortly after it came out.  Through the Red Wings' January 20 game, Nyquist has 7 goals and 24 points on the season.

Two years ago, you couldn't hear much hockey talk before someone mentioned Johnny Gaudreau.  That was before Connor McDavid,  Auston Matthews and Patrik Laine busted onto the scene.  He's still exciting and Flames fans still love him, but he is trending toward a statistically worse season than his first two.  Through 38 games, he has ten goals and 29 points.

Joe Thornton is the veteran off the active players in the pack.  After more than 1,400 NHL games he is still productive.  Through 46 games this season, he has just three goals, but 26 assists.

The final card is the pack is a retired player and is numbered out of 499.

I've bought a fair amount of hockey over the last few years, but I've never heard of Bob Bourne.  It appears he is an Artifacts regular that scored 258 goals over a 14-year playoff career.  He was a key, and often overlooked, member of the four-time Stanley Cup winning Islanders of the early 1980s.

The pack left a lot to be desired, but that means odds are others than bought single packs are happy.  I may reconsider the "no lack pack standing" philosophy, as it's truly failed me more times than not.

Sorry that happened to you! I trust your next venture into the "No Pack Left Behind" world will be much more beneficial.

The Thornton with the great beard is nice.

The cards are OK...Not a huge fan of just the player image in front of some computer generated image, but that kind of money for only four cards is kind of a ripoff. Of course back in the day I spent$500 for five cards so what do I know.

Probably all could be found in a dime or quarter box at a local show very soon!