Written by SpastikMooss at 10:47 AM
It's been awhile since I posted on here, so I figured I'd try posting some video game cards again. Today's come from the Madden series, where for many years players could use points earned in game to buy packs of cards that fill out a virtual 9 card per page binder. There are lots of nice incarnations of this idea in Madden, but my personal favorite comes from Madden 2004, as the cheats are the best in this game and many of the cards that you earn are cheats! So basically every time I open a pack I'm hoping for cheats instead of players. Let's see how this pack went! 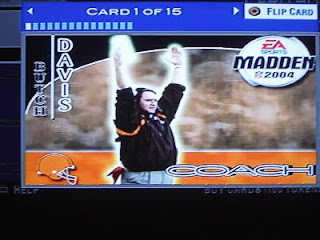 Not a terrible start since I often play as the Browns. It's good to note here that player/coach cards can give bonuses to that player/your team if activated during a game. For instance, with Davis as my coach, a bronze card of his increases my team awareness for one play: 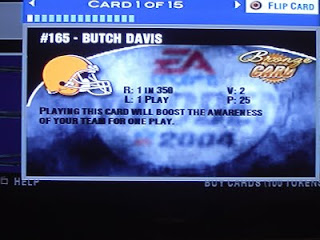 Cool, huh? Too bad I play Franchise now and Butch Davis isn't my coach once someone signed him away from me!


2. Mr Mobility Cheat Silver (this picture also shows the "new card" banner that comes up when a card is new to me, as well as the annoying new song popup that emerges when the songs change in game): 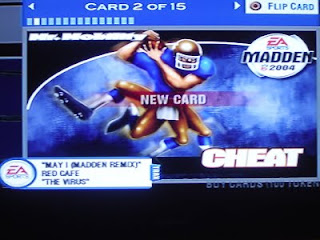 Mr. Mobility is a real weird cheat. It makes it so your QB can't be sacked (in this instance, for one quarter): 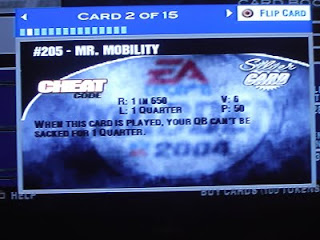 Thing is, your QB can still be hit, which sends him sprawling around and doesn't let the player do anything for a second. I've had this happen before where I got stuck in a sea of 4-5 defenders who just kept hitting me over and over without sacking me. So this actually hurt me worse, because they hit me 30 yards back and my QB eventually stumbled out of bounds since I couldn't get away from the pile. But sometimes this card works nicely, if there's only light pressure. 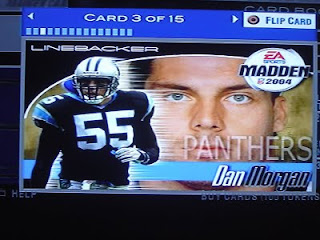 Here's the first player card. It's a Gold Morgan, which means he'd get a 25% ratings boost across the board if I played this card with Morgan on my team: 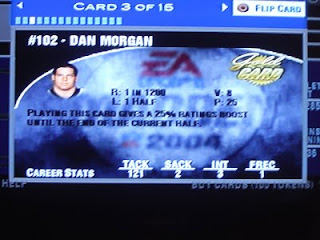 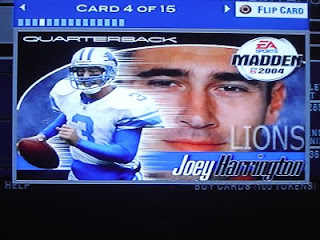 Harrington used to be on a lot of my teams. Weirdly he's not on my current Browns team. 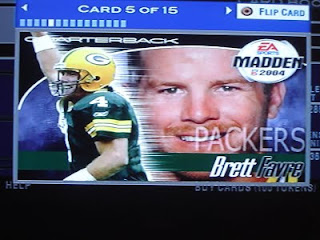 Favre was never on my teams way back when, and he still wouldn't be now. 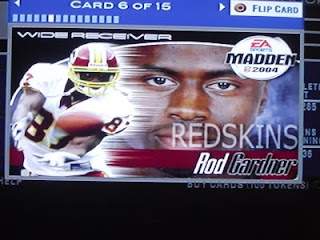 Rod who? I love playing older games and remembering guys that time forgot. 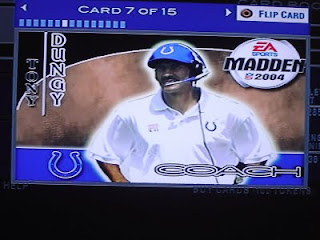 A coach I never used, since I'm never the Colts. 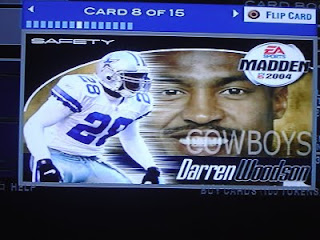 An excellent safety, Woodson is somehow also a guy who is never on my teams. Probably because guys like Lawyer Milloy, Brian Dawkins, Michael Stone and Ifeanyi Ohalete always get picked over him by me. 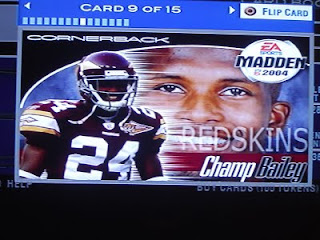 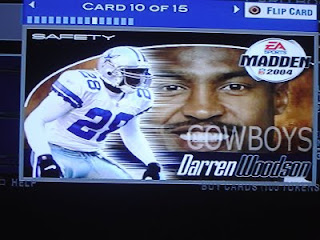 Doubles? They do happen, though technically this is a different parallel. The bronze card is only active for one play, whereas the Gold is active for a half, so obviously Gold is better. In terms of collectible-ness, these two variations put me a silver Woodson away from his complete set in the game. 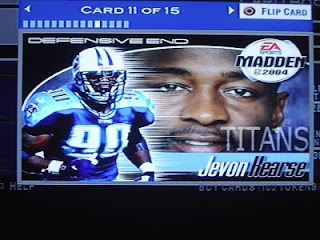 The Freak used to be so excellent. 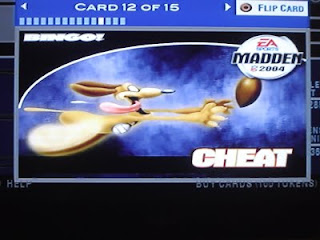 This is one of my favorite cards in the entire game. It increases your interception rate by 50% for the entire game. How cool is that? I've played the Gold before and gotten like 15 picks in a game, which is so much fun. 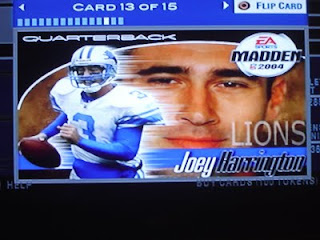 Another parallel. Damn, I guess the game wants Joey on my team! 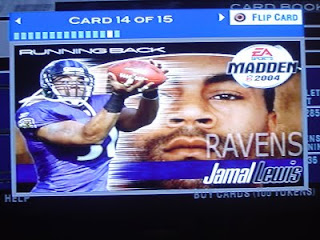 Lewis in his pre-Browns days, when he was a force to be reckoned with. 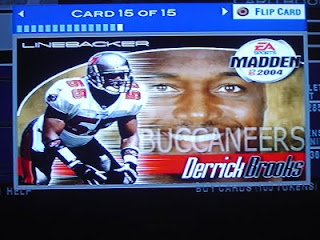 And we round out with a nice Gold variation of one of the better linebackers in the game.

So there you have it! Not my best pack ever, with only two cheats, but they can't all be awesome. There are 285 cards in the set total, but you can only buy 230 cards - the other 55 need to be unlocked through special challenges in different game modes. Now excuse me as I use up all my coins to buy many, many more of these things!

Though when you end up getting TWO Joey Harrington's :P