Written by Jafronius at 1:42 AM
Greetings!

Found this pack and saw that it hasn't been posted here yet.  We've seen the High Series, so we know what to expect.  Might as well get on with it then...here's some 1992 Upper Deck! 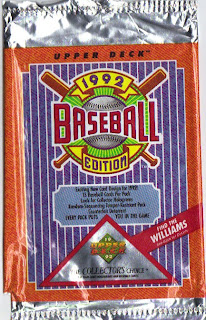 The Williams being referred to here is the Ted Williams "Baseball Heroes" subset.  Won't be finding one here:

I wonder how many PSA 10's Dmitri has of his own rookie card.

Nice photo of Bill on the back of the card (way better than the front).  Never liked the limiting of stats to the last three years. 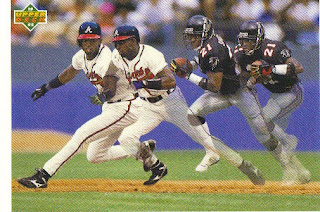 Don't know if SP stands for Short Print, but Beckett's listing at least 4 SPs in the set.  The back has a write-up on Deion's switching back and forth between the Braves and the Falcons during the 1991 season. 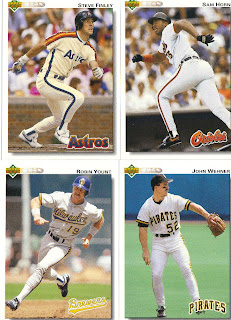 Young Finley and a Hall of Famer in this group.  Growing up, I never considered Yount to be Hall-worthy.  I guess that's a result of only watching Cubs games (no cable so no nightly baseball highlights and no American League games - the White Sox were on SportsChannel). 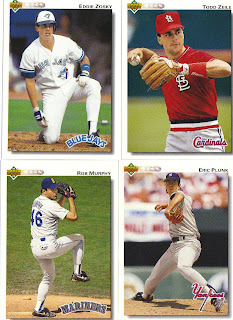 And that's how it ends, not with a bang, but a kerplunk.  Enjoy the weekend, everyone...thanks for reading!

Thanks for posting this. I've got wax box of this stuff that's been sitting on the bookshelf in my office for over a year now. I should really get around to opening that...

I love that Deion card! I remember him going back and forth between the two teams that year.