Written by Jafronius at 12:18 AM
Greetings!

According to the Blogger tool I use to upload my posts, we have recently surpassed 1000 posts.  Congrats to everyone who has ever posted for making this possible.  Here's to the next 1000!

Anyway, to commemorate the occasion, I decided to bust out a find at the old Dollar Tree.  Man, if old Me could travel back in time and talk to college freshman Me, I'd first say study harder so I could get a better degree so I can get a better job and so I don't have to work two jobs later in life.  I'd then say to not eat so much.  I'd then say to not buy so many of these packs because I can get them for a dollar later.  Then I'd probably go to the bars.  Or something like that.  Here's a pack of Star Trek:  The Next Generation CCG! 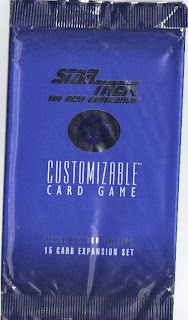 I'll try to recap this release.  In 1994, Decipher decided to hop on board the relatively new CCG market and partnered with Paramount to release a Next Generation CCG.  The first printing was black bordered and was pretty popular.  When it went through the second printing, the cards were white bordered.  Obviously, the black bordered cards are more valuable.  Subsequent sets were only released with a black border, as the popularity started to wain and the need for a second printing was not there.

60-card starter decks were $10, while the Expansion packs were $3.  As a result, my baseball and basketball card purchases took a hit, as virtually all of my allotted funds for the hobby went to buying these cards as well as the Star Wars CCG Decipher released around the same time.

I'll try to explain the game as we go along, but here are the cards from the pack:

The top three cards in the pack were always Uncommon cards.

The 2 players would assemble a deck of 60 cards, and you would either be the Federation, the Romulans, or the Klingons (later sets would allow you to play as the Bajorans, the Ferengi, and even the Borg).  The players would then establish a line of Missions, like the Expose Covert Supply mission above  The opponent would then seed your missions with various Dilemmas, and vice versa.  The players then deploy their ships, have personnel staff the ships and off they go to solve the Missions and Dilemmas.  Solve them, and you get the points.  Get to 100 points and you are victorious.

So as you can see from the cards above, Mirok, from "The Next Phase", could defeat the Dilemma (from "The Loss") but cannot assist in completing the Mission, as he does not have the skills to complete it (although he can be part of the landing party, because the Mission can only be attempted by Romulans). 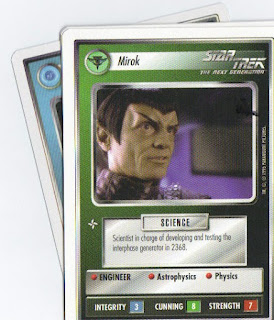 My friends and I always played this mini-game when buying packs, slowly revealing the top-left corner of the fourth card.  This was because the fourth card was always the Rare card.  Blue is good, because in the Premiere set, the Federation was stacked.  You could get the Enterprise, or Picard, or Data.  Who / what did I get? 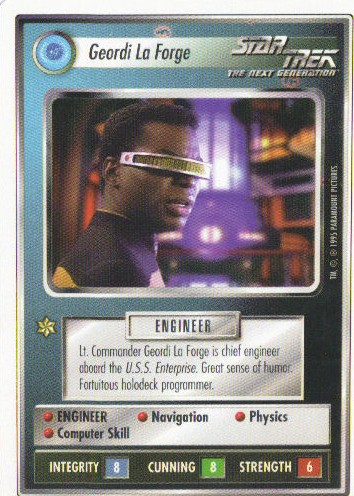 Nice pull to get a member of the Bridge crew.  Could have been worse, the other pack I picked up had Geordi's dad.  Yes, "Chicken" George played Kunte Kinte's dad in the world of Trek.

The remainder of the cards in the pack were always Common cards: 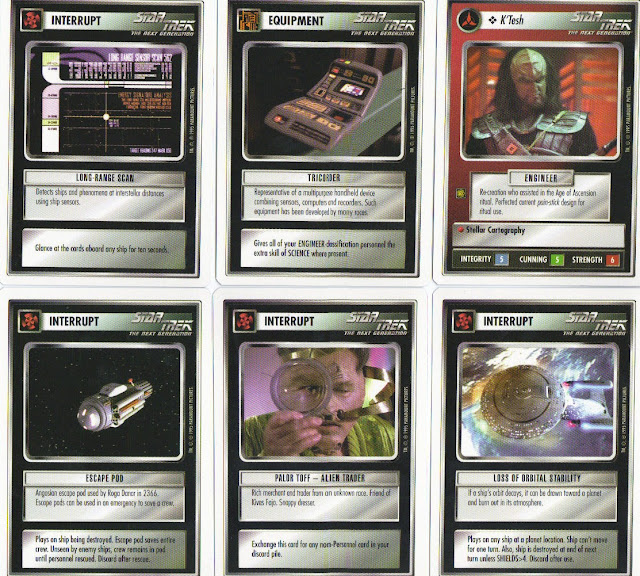 You could play Interrupts at any time to try to affect the game play.  The majority of the pictures were taken from actual Next Generation episodes.  The K'Tesh card is from the episode "The Icarus Factor".  The character had no name in the episode, but since John Tesh played the character, they named the Klingon after him. 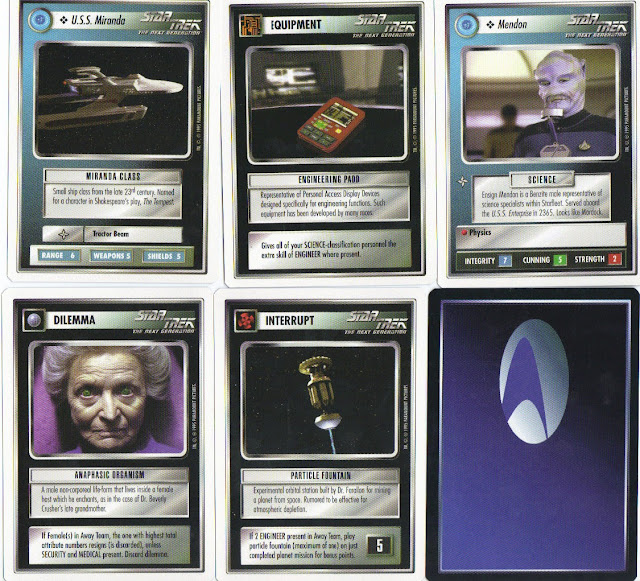 In order for the ship to move, you needed to staff it with personnel.  The minimum staffing requirements are represented by the little star logo.  Therefore, all you need is Mendon, from "A Matter Of Honor", to properly staff and fly the U.S.S. Miranda.  And give Mendon the Engineering Padd and he becomes an Engineer, to help Geordi with the Particle Fountain Interrupt and snag you 5 points when you complete a Mission.

Anyway, that's the pack.  I think I have a some of the other Expansion packs lying around, so you all may get to learn more about a game that's no longer around down the road.  Good times.

Have a great weekend!  Thanks for reading!