Written by Community Gum at 3:55 PM
Now that 2012 Topps is well established in the marketplace, I think it's high time I cleaned out my 2011 Update folders. I ran through the various 2011 baseball packs for Series 1 and Series 2. I meant to be more timely with these, but such is life. No one has posted anything from the blasters yet so you're in luck. I'm coming to the rescue!

The boxes give you 10 reduced-size packs of 8 cards each, compared to the normal retail size of 12. 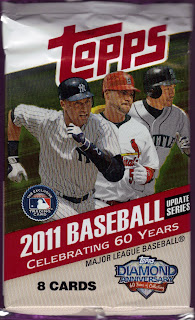 See? Proof. What kind of late roster additions, rookies, and random scrubs will we find? 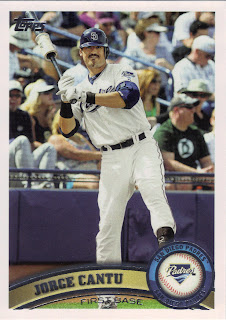 US272 - Jorge Cantu - What a great picture. He looks slightly more awkward than the guy in the Green Lantern shirt felt in high school. 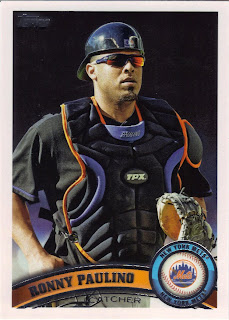 US182 - Ronny Paulino - His catching gear kind of looks like the bat suit. Minus the nipples. 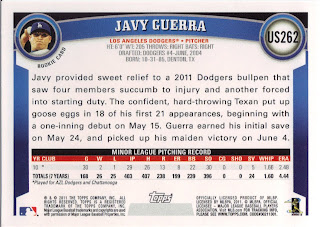 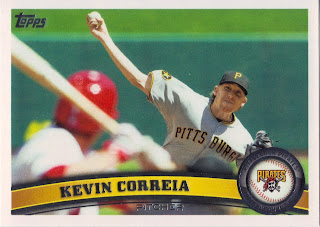 US245 - Kevin Correia - Sometimes pitchers look like Freddy Kruger when they throw. 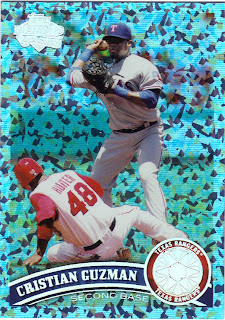 327 - Cristian Guzman Hope Diamond #43/60 - Holy fother of muck! From a blaster pack? What are the odds? I don't know because I tossed the wrapper already, but this is awesome! It's actually the second Hope Diamond I found in my blaster binge. My first was an Ian Desmond. By the way, I'm pretty sure I traded this to PATP a while ago. 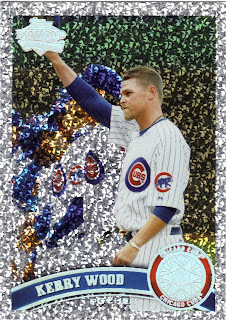 US115 - Kerry Wood Diamond Anniversary - This is even better! For those that don't know, I collect Kerry Wood, so this sparkly parallel was a really nice surprise. I usually don't have such luck. 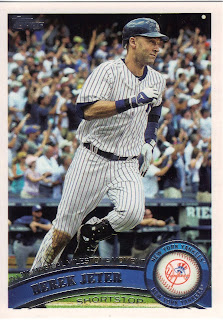 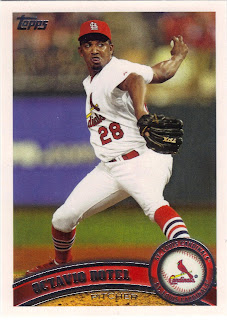 US248 - Octavio Dotel - His face matches what mine looked like two and three cards ago. My surprise made me look like that. Luckily it didn't stick.

I may have just shown the best pack of the group out of the gate, but then again, maybe not. Stay tuned, because I have a few more Updates to...update.

Torii Hunter and Christian Guzman on the same card and neither of them are in Twins uniforms. This makes me a sad panda.

Where did you find these? I've been looking all over North Jersey for 2012 update blasters.

These are the 2011 Updates, but I got them back in October when the set was released. I'm just really slow in my posting. With 2012 out, they may not be on shelves anymore.
--Jon

I thought that looked familiar. If youd didn't trade it to me, you should. ;)