Written by Community Gum at 4:48 PM
And it all comes down to this. We're at the end of the road in my Update update. Time flies, doesn't it?

Well, I don't know about you, but when I get these blasters, I save the manufactured patch card for last. I think it's because there's less chance for disappointment. This year, the blaster boxes didn't have a checklist on the side, so I had no idea what to expect. This should be fun. 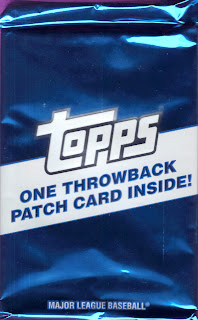 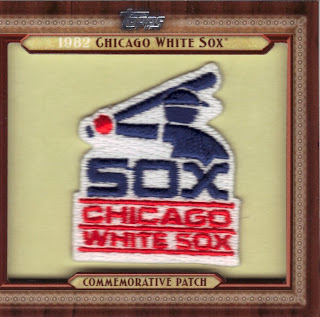 As I've done the past couple times, I'm going to stretch this out some by only showing the team first. 1982 White Sox. Who could it be? Well, I know that our other patches haven't used the year to dictate player selection, only the logo, so I don't think we'll be revealing a Ron Kittle card.

If this were someone from the 1982 team, then our most likely matches would be Carlton Fisk, Harold Baines, and with 75-1 odds, Rusty Kuntz. Rusty? Is that you? 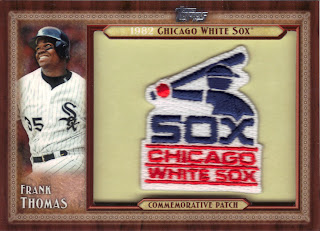 TLMP-FT - Frank Thomas - No, it's not Rusty, it's a sweet Frank Thomas card to add to my quickly growing collection. A Fisk would have been fine, but I'll take the Big Hurt instead any day.

So there you have it. 2011 Topps is in the books as far as I'm concerned. All you aspiring APTBNL contributors out there should know that I don't plan to buy any retail Topps this year, so if you want to see this drastically detailed overexposure, it rests on your hands. Next time, I'll be back with some fun non-sports packs as the blog moves towards into it's second thousand packs.