Written by shoeboxlegends at 8:29 AM 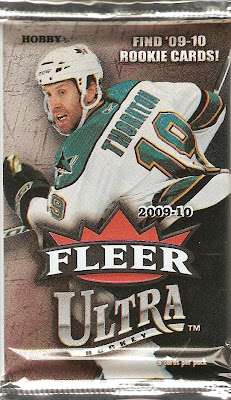 After a rough couple of days of being sick and then watching my favorite hockey team, the Boston Bruins, get eliminated in Game 7 of their Eastern Conference Quarter-Final match-up against Washington last night, I'm hoping a pack of hockey cards will help to cheer me up.  I always keep a stack of 10 or so packs in my card closet for a rainy day, and this one's been there for at least a couple of years now.  I don't particularly care for this set, and I don't even recall buying the pack.  It's a hobby pack, so I must have picked it up at the shop when I was grabbing supplies or something.  Anyway, 8 cards included, here we go...

Nikolai spent the 2011-12 season playing overseas in the KHL.

Vanek's 2011-12 season wasn't exactly stellar.  His 26 goals made for his lowest total since his rookie season.

Here's one of those older players that you just have to root for.  At age 39, Whitney appeared in all 82 games this past season and scored an impressive 77 points (good for 12th in the NHL)!  He chipped in with a goal and two assists in round 1 of the playoffs, where his Coyotes triumphed over the Chicago Blackhawks.

So much for getting over last night I guess.  I still can't get over the goal that won it in overtime for the 'Caps.  I think it would have been much easier to take had Semin or Ovechkin just sniped a corner or something.

Alright, I've had it with this pack.  My Gold Medallion parallel is a rookie card of Jay Beagle, who was a thorn in the Bruins' side during the entire series, especially at the face-off dot.  He actually seems like a great, scrappy third or fourth line forward and in time maybe I'll appreciate pulling this rookie parallel.  Right now I feel like taking a pair of scissors to it though.

The final 3 cards all had badly dinged lower left corners, so they were tossed.  If anyone wants or needs any of the first 5 just let me know.