Written by Jafronius at 1:37 AM
Greetings!

Hope everyone had a great week.  This post marks my first anniversary contributing to this fine website.  I did not think I'd be consistent enough to post somewhat regularly.  Yes, I'm a day late, but that's how it is I guess.  In 365 days, I've moved on from transforming robots to a time-travelling alien with a British accent.  Here's a pack of 2011 Doctor Who Monster Invasion!


I picked up a pack of this and the follow-up release (foreshadowing a future post, wink, wink) earlier in the year during the 2012 Chicago Comic and Entertainment Expo (C2E2).  I really have no idea how this game is played, as my searches on the interweb have yielded nothing useful.  The wiki site is found lacking, and even the official website does not say how you play the game.

Monster Invasion appears to be a magazine the BBC produces for the kiddies, and the cards complement the magazine.  Anyway, here are the cards from the pack:

It looks like you use the stats on the card when the characters go head-to-head, and the stats can be boosted by those gadget cards.  Don't think the Vortex Manipulator can help Nixon out against that fiery rock monster. 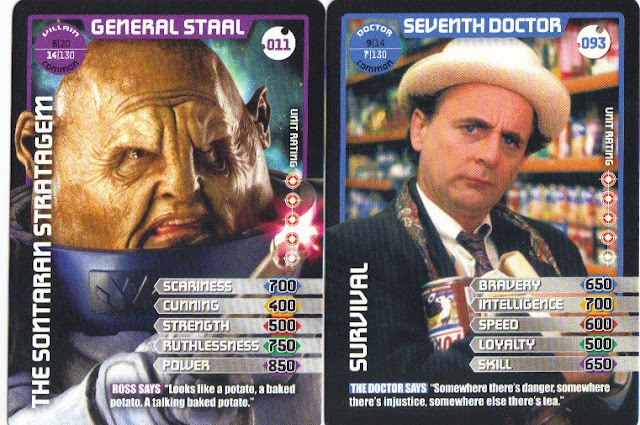 It is good to see that they were throwing a bone to the "classic Who" by at least having one of the Doctor's previous incarnations pop up on a card.

The above 3 cards are "adventure cards".  It appears the opponents have to use the stat on the card in their card battle.  So if Monster Mucus is played, Radagast can take out the fiery rock monster with that Vortex Manipulator, but would still lose to Mr. Potato Head? 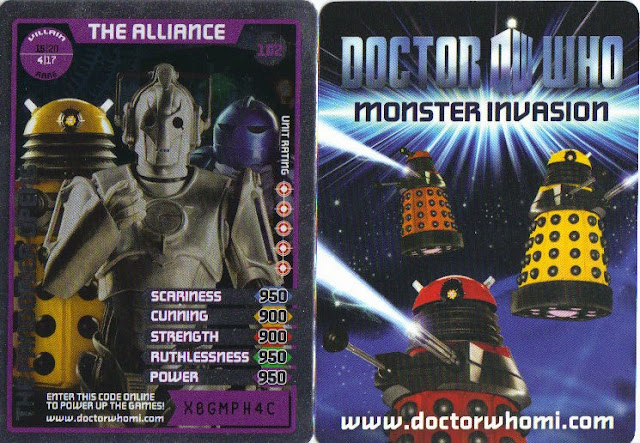 That Alliance card is pretty shiny.  Each pack comes with a foil card.  There are 8 common cards and 1 rare card per pack, but I don't know if the rare card is always shiny.  I have no plans to try the code on their website, but is someone out there does, let us know how it goes!

Anyway, that's the pack.  I was bummed that there's no info out there on how this game is played, but I would imagine the target audience would be pleased with these cards.

Wow, these are great and I would buy some even if I would never play the game.