Written by Jafronius at 6:25 PM
Greetings!

Hope everyone is having a great weekend.  We had nice weather this weekend in Chicagoland.  Unfortunately, the suburban lights prevented me from catching any of the 2012 Orionid meteor shower.  Well, if you did try to catch it, hope you enjoyed the show.

While we're on the topic of outer space (what a segue!), here's a pack of a product that's been catching my eye whenever I peruse the Target card aisle.  Here's a pack of Star Wars Galactic Files!


Technically, this Jumbo Pack is in the Target card endcap in their toy section, but there are 9 card gravity feed boxes in their card aisle (if someone posts the 9-card pack, I'll update my article title).

The set is billed as "The most comprehensive Star Wars card set.  Ever."  My guess is this set is so big to celebrate the 35th anniversary of Star Wars.  If that's the case, I'd like to remind the card manufacturers that the 50th anniversary of Doctor Who is next year and Star Trek's 50th is in 2016.  Wow me.

There are 350 cards in the set, with several subsets, with the ones getting the most attention being the  Sketch Cards (1:96) and the 17 possible autographs to get, lead by Indiana Solo himself, Harrison Ford.  There are also parallel cards...Blue (#/350), Red (#/35), and Gold (1/1).  Plus, Topps went ahead and confirmed info about printing plates and card variations.  It's like a Topps Star Wars Update Series or something like that.

Anyway, here's the cards, starting with the Top part of the Jumbo Pack:

Just showing the back of Mace for you all to see (it wasn't a duplicate).  They got a Transformers-like Tech Specs for the specific characters at the top, as well as how the character is associated with other characters at the bottom of the card.  The Clone Pilot back just has general information about the overall group.

Moving on to the Bottom part of the Jumbo Pack:

Apparently, Vader is one of the variation cards, but the one above is the common one (the rarer one is scowling Anakin).  Ben's from the "expanded universe", the son of Mara Jade and Luke Skywalker. 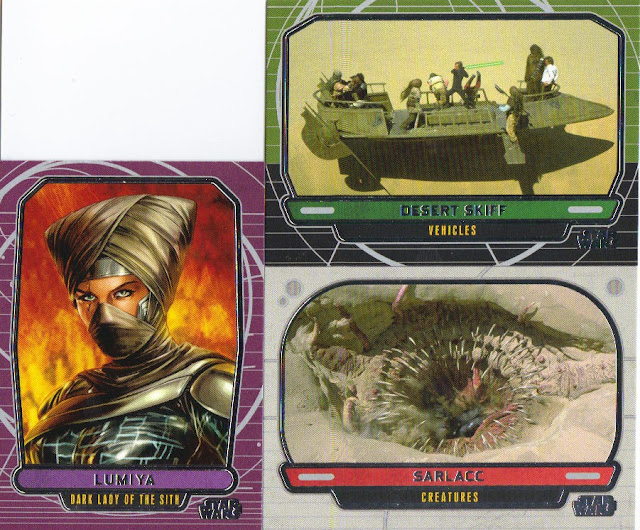 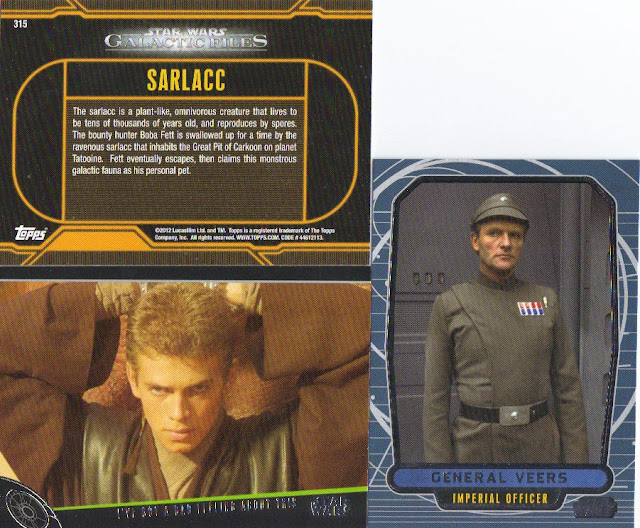 Again, showing the back of the Sarlacc card.  I did not scan a back of one of the vehicle cards; they listed general information about the vehicle like maker, capacity, and speed.  The "bad feeling" card is a subset, seeded 1 in 4 packs.  I think it has every character who said the line and why they said it within the context of the movie.

Anyway, that's the pack.  Younger me would be pretty excited to try to complete the set.  Older (and broke) me would like to get more packs, but really can't justify the $3.19/pack or $5.29/Jumbo Pack price tag (hooray for multiple Target discounts for this purchase).  Perhaps in a year or two this will pop up in the Target discount bin and we can all partake in the Force.

That's it for now.  More later...thanks for reading!