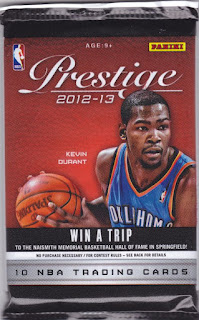 I have a really hard time finding basketball packs on the retail shelves where I live in Portland, Oregon. I don't know if that has anything to do with us being a one sport town (basketball) or if it's just because there isn't much of a market for basketball cards to begin with. There's plenty of NBA Hoops product hanging around right now, though, and recently I saw another new product on the shelf. I picked up a pack on a whim even though it wasn't really in my budget. 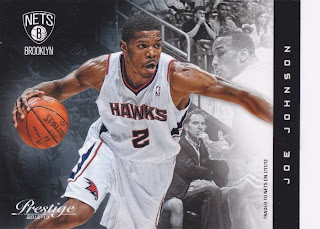 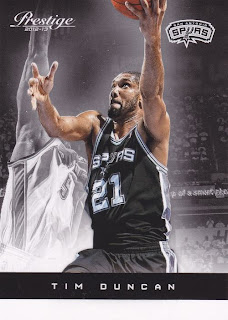 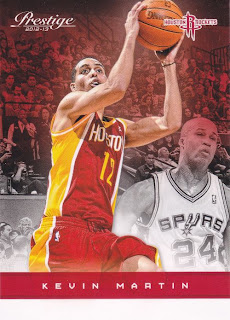 97 - Kevin Martin - The league is making a big deal out of wanting to clean up the flopping problem. Kevin Martin is one of the chief offenders of an equally huge problem. He's a flopper with the ball in his hands. It's ridiculous how many times he gets to the free throw line. 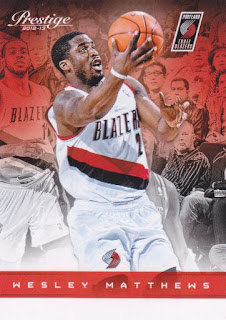 98 - Wesley Matthews - Here's one of my guys. Wesley really plateaued last year after a promising start to his huge Blazers contract, but I'm hoping that the lockout year was an aberration (much like the Blazers' terrible season.) 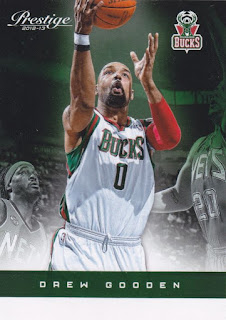 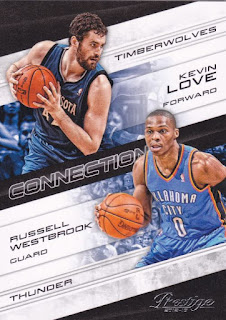 3 - Kevin Love / Russell Westbrook Connections - The "connections" is that these two went to UCLA and played together. One thing that Panini does that really annoys me is that they don't distinctively number their insert cards. Other card companies have for the most part followed the golden rule of numbering their inserts with a separate set of card numbers that make them distinguishable from the base cards. They also don't provide odds on their inserts on the wrapper, but they make a point of listing out each insert and how many cards are in the insert set. Weird. 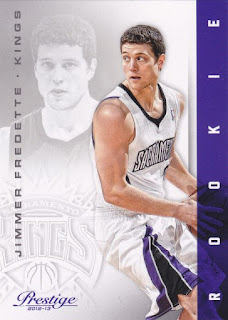 163 - Jimmer Fredette - The big deal with this year's NBA cards is that, due to the lockout, there essentially were no rookie cards last year. This year's sets contain "rookie cards" for last year's rookie class as well as this year's. As far as The Jimmer goes, though... I've got nothing. 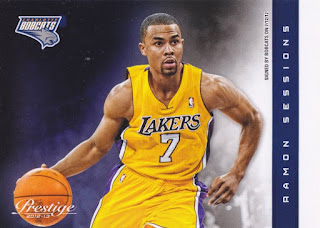 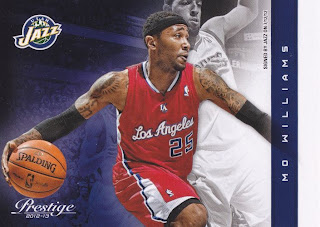 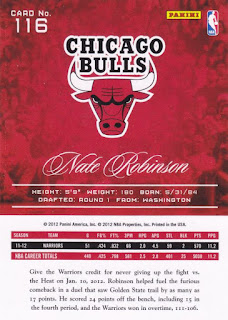 116 - Nate Robinson - Here's a look at the card back. It's a typical Panini design, albeit with a massive team logo. It's okay.

Basketball card collectors: drop me a line if you are interested in a particular team or card. I have a lot of basketball cards that I have no idea what to do with, other than put them on Listia or something.