Written by Matt at 4:05 PM
I haven't posted a pack here on A Pack To Be Named Later in some time. 2-3 years, maybe? I know, I know...shoot me. However, tonight is the final BCS National Championship Game, and I have a pack ready to send it out in style.

Without further ado, the second oldest pack to be opened to date (darn Zorro!) for this glorious blog: 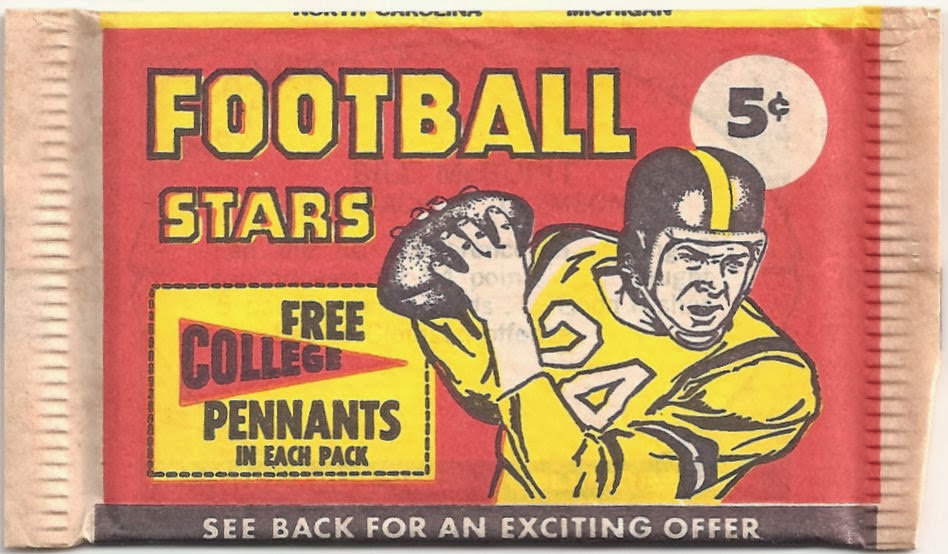 1961 Nu-Card Football Stars. If you've never heard of Nu-Cards, it would be hard to blame you, because they weren't around for very long. Based out of Bellmore, NY, they mostly released entertainment (Horror, Western, Music, etc) sets. However, they had two "major" sports releases. The more famous of the two is likely the 1961 Baseball Scoops set. It featured highlights and heroes of the game dating back to the early 1900's in a design layout that mimicked a newspaper cover.

The other sports issue was the 1961 Football Stars set that we're concerned with in this post. The set features 80 cards (strangely numbered 101-180) and is composed of the top college players of the day. The most noteworthy name in the set is Ernie Davis, though it also features the first cards of NFL standouts Roman Gabriel and John Hadl.

Each pack contains 5 cards, and two "mini-pennants" and the back of the wrapper advertises a redemption program where 5 wrappers and 25 cents shipping could snag you a full-size pennant of your favorite school (Go Rutgers!). 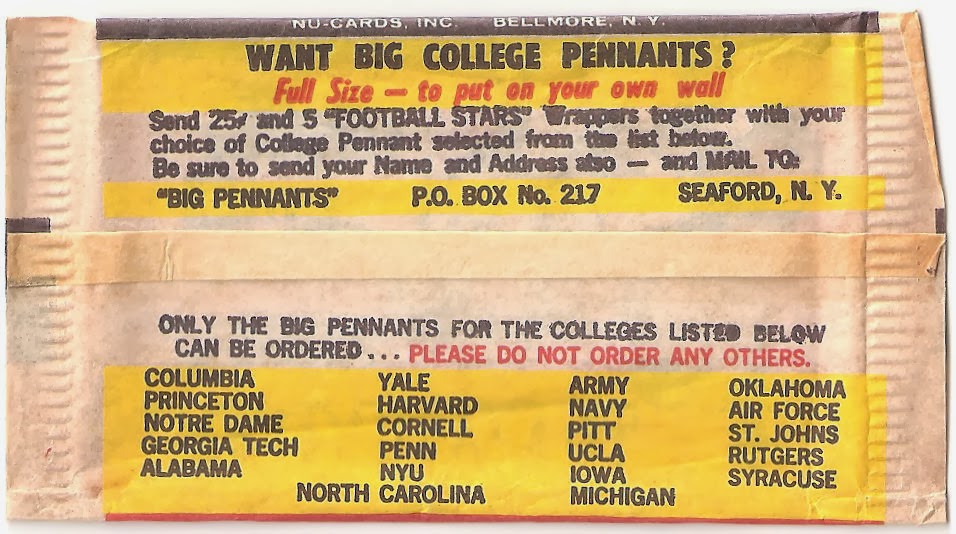 Let's open this bad boy up and see if Ernie Davis is staring back at us! 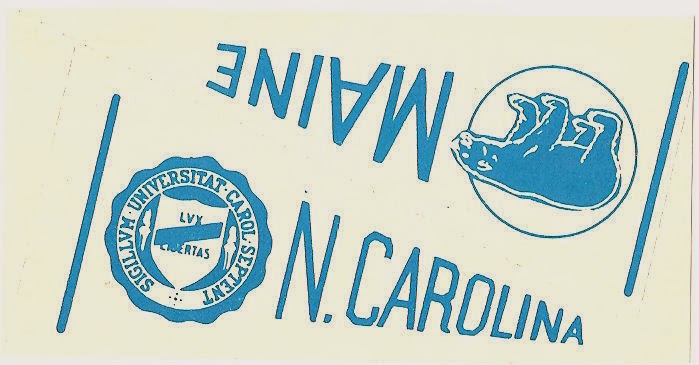 Ahh...first we have the "mini-pennants." I use quotation marks because these are really, umm, poorly made. They're made out of a slightly glossy, but incredibly thin paper that I'm very afraid that I'm going to tear with even minimal handling. It's hard to tell from the scan, but there is a perforated line that enables you to separate the two. Maine and North Carolina, ehh? Do they even still play football at Maine? (Yes, they do. They were actually in the FCS Championship playoffs this past season). 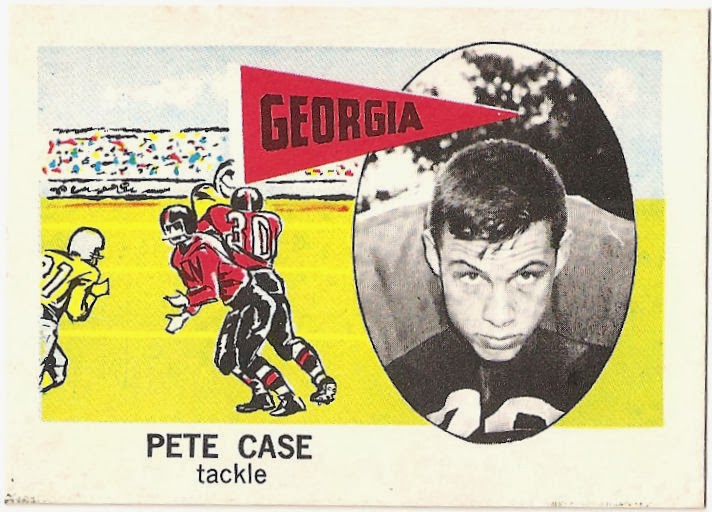 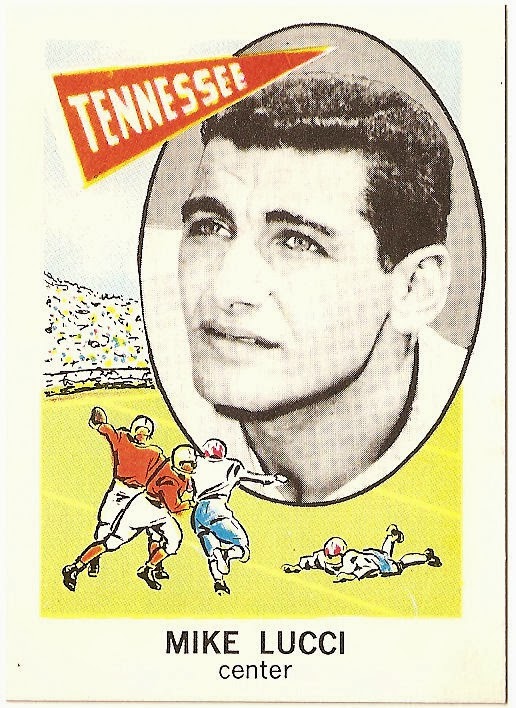 #121 Mike Lucci. Mike also played in the NFL! He was drafted by the Browns in the 5th round in 1961. He played 12 seasons total for the Browns and Lions, and played in the 1971 Pro Bowl, where he somewhat astonishingly amassed 5 interceptions, including 2 pick-sixes. Retiring after the 1973 season, he got into business and went on to become president of Bally Total Fitness. 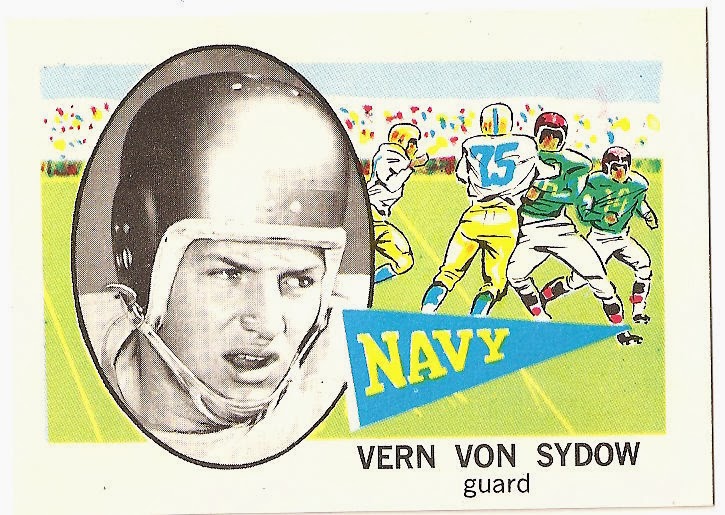 #105 Vern von Sydow. Vern went onto become a helicopter pilot in the Navy and served in Vietnam. He received the Navy Commendation Medal for his involvement in a rescue of a downed American crewman in North Vietnamese territory in 1968. 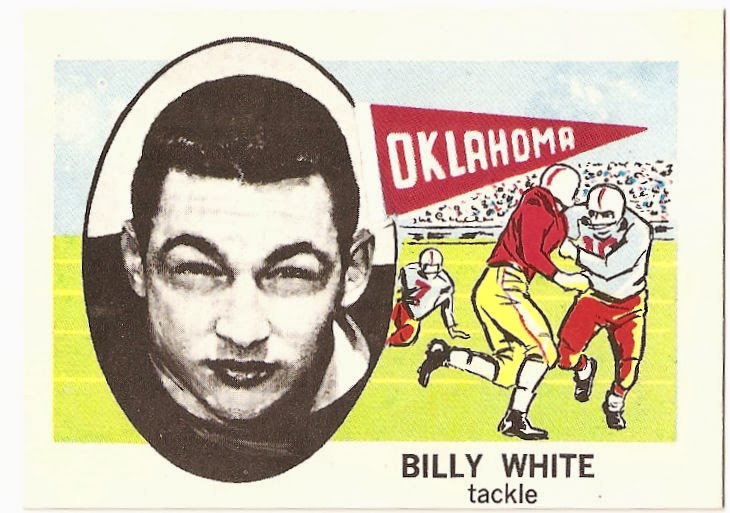 #167 Billy White. Billy was from Amarillo, Texas. There isn't a lot of info about him that I can find. He had some pretty awesome eyebrows, though...am I right? 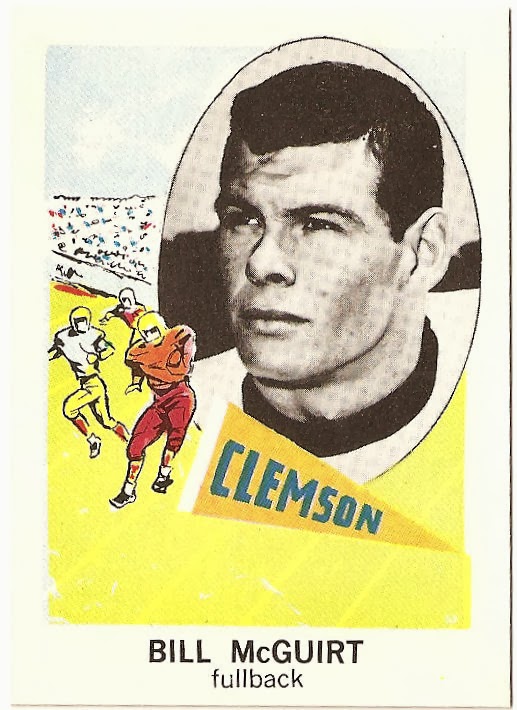 #160 Bill McGuirt. Like Billy White, there doesn't seem to be a lot of information available on Bill McGuirt. Here's the reverse of his card, so you can see what the backs look like: 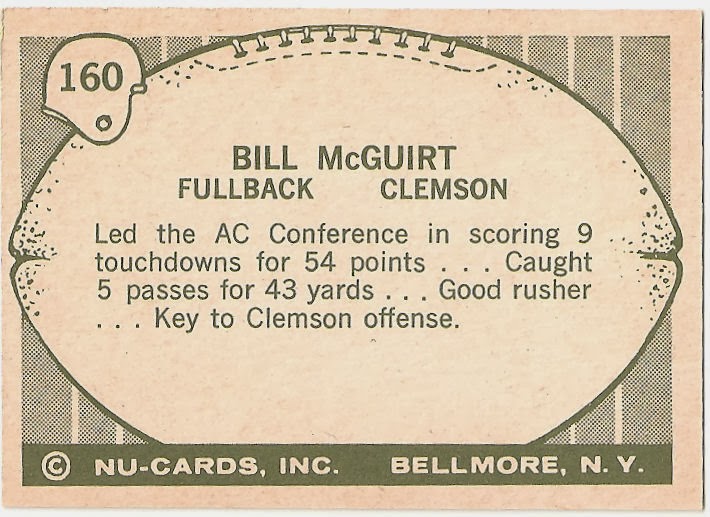 We didn't hit any of the bigger names in the set, but I'm pretty happy. I think that it is a fun set, and it is pretty easy to collect, with the small set size and only a few bigger names. I have the cards of the two Rutgers players in the set, Steve Simms and Alex Kroll, in my collection of cards from my alma mater.

Enjoy the last BCS Championship tonight. Personally, I'm hoping that the SEC's stranglehold on the title is loosened.