If the Blogger Scheduler is working properly (note:  it didn't, probably because I didn't hit the Publish button), then this post has gone up after both football games are done and thus begins the 2 week wait for the Super Bowl.  It's best to get the final post from the Fairfield box out of the way then...OK, because it's a running gag...

For Christmas, Santa judged me worthy enough to get some baseball cards for Christmas.  Therefore, a Fairfield Sports Chicago Fan Box found it's way into my stocking: 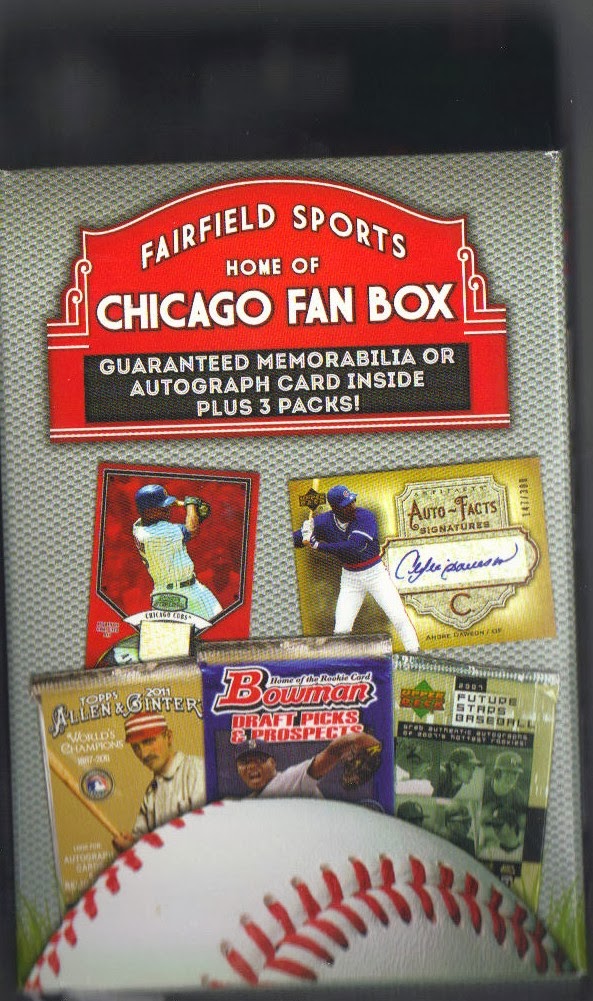 I've seen these $12 boxes at Target for a while and even thought about picking one up to see who'd I get.  I mean, look at the box...Soriano and Dawson!  The sides of the box (not pictured) have even more stars...Billy Williams!  Fergie Jenkins!  Ernie Banks!  Multi-patch cards!  It can't be that bad...right?

Anyway, with the three packs out of the way, it's time for my guaranteed memorabilia or autographed card.  The card came in a plain white envelope and was not protected.  Who'd I get, one of the aforementioned players?  Maybe it's one of the players on the sides of the box I didn't list...Chuck Klein?  Travis Wood?  Derrek Lee?  Darwin Barney?  OK fine, you all waited long enough: 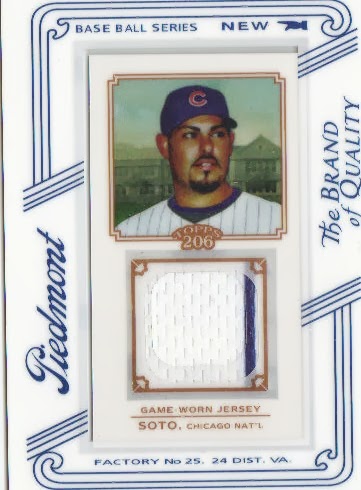 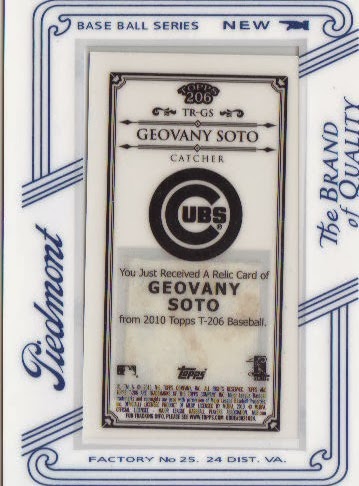 Not a horrible pull, in my opinion.  I was expecting some sort of no-longer-in-baseball prospect autograph card   The card is from the 2010 Topps T-206 set.  This one is the Piedmont back.  There are also Old Mill and Polar Bear versions, but I don't know the difference.

I also lucked out and got one of them fancy uniform cards with a stripe on them.  I know about the memorabilia controversy and that this very well may not even be a piece from a baseball uniform, but hey, it's my first striped something, so that's cool with me.

Anyway, that's the card.  Anyone see a similar Fairfield set in his or her neck of the woods?  I'd be interested to see if there are sets outside of the major markets.  More later...thanks for reading!

Not too bad! I've picked up a couple of these too. I'd rate your Geo above the Derrek Lee UDX relic I pulled because it looks so much better, but below the Goudey Billy Williams relic I pulled because holy cow someone actually put a Hall of Famer in a repack box once. I'm gonna tell my grandkids about that one day... I, uh, might need to get some better stories by then.

I went to Target a few days ago and didn't see any San Francisco, Oakland, or Bay Area editions. However... for $12, I'd probably pick one up.