Written by Chunter at 11:45 AM
Hi all. It's me, Chunter - you may know me from my other blog, Chipp 'n' Dale. I'm happy to be here, and since this is my first post, feel free to leave feedback in the comments on how I did! 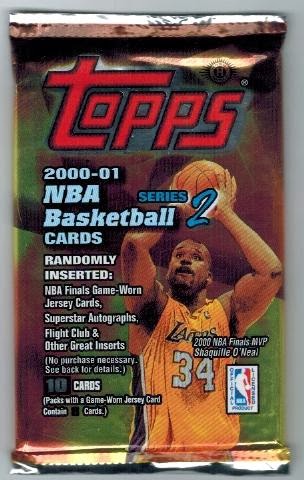 Here we have a pack I won on Listia, 2000-2001 Topps Basketball. As I am not a basketball card collector and only the most casual of NBA fans, this should be interesting. I do have a mild rooting interest as a Bulls fan, but when a Heat fan friend of mine said something about Derrick Rose being re-injured (in November), I was not aware. So this pack will be interesting. I recognize Shaq - wasn't he the conductor for the Boston Pops at one time? 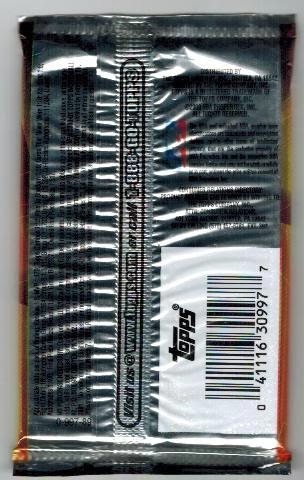 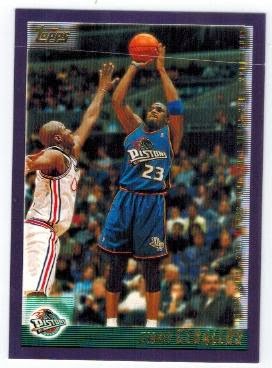 Card #220 Cedric Ceballos. The Hawaiian-born Ceballos is wearing that #23, which would be worn by Michael Jordan the next year for the Washington Wizards. 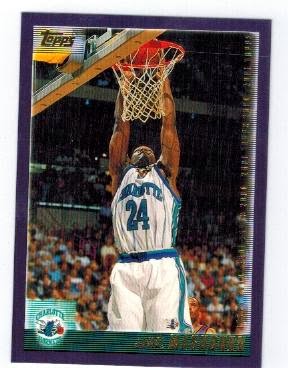 Card #171 Jamal Mashburn. "Monster Mash" going up for a dunk! I really love the 90s-era Hornets - Muggsy Bogues and all that. I will be hanging on to this card, but the rest are up for grabs. 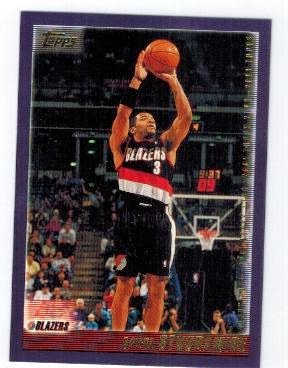 Card #208 Damon Stoudamire. Stoudamire, like Muggsy Bogues, was on the short side, 5'10" to be exact. He's now an assistant coach for the Arizona Wildcats, who are doing pretty well this season. 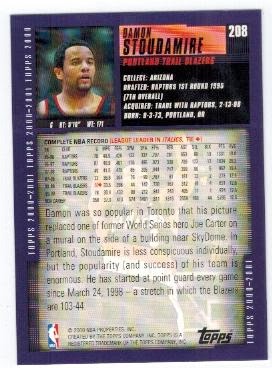 Here's the back of that card. Full stats and a nice-sized write-up, but the type is a little cramped. I like the design okay though. 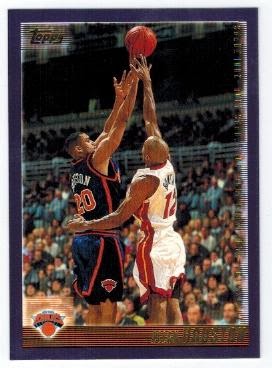 Card #193 Allan Houston. Still with the New York Knicks as an assistant GM, Houston's career was derailed by a knee injury just a few years after this card was made. 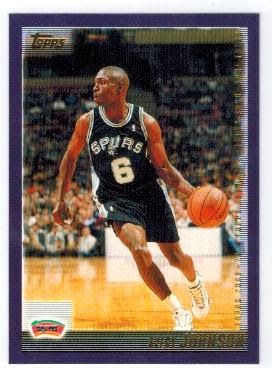 Card #260 Avery Johnson. Another 5'10" guy, Johnson hit the game-winning shot for the Spurs in the 1999 NBA Finals and went on to coach the Mavericks to the NBA Finals in 2005, where they lost to the Heat. Back before the Heat had Lebron and Chris Bosh, that is. 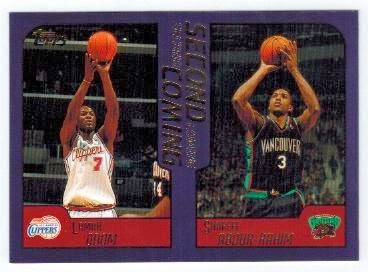 These Second Coming cards round out the 295-card base set. This one is #288, Lamar Odom and Shareef Abdur-Rahim. Based on the fact that in 2013, Odom was still getting dropped in Eminem songs and Abdur-Rahim was being named GM of some NBA D-League team, Shareef was probably not exactly the second coming of Lamar Odom. 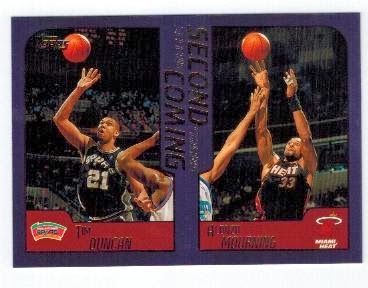 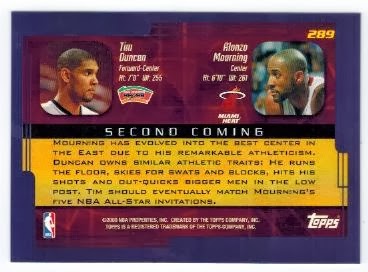 "Tim should eventually match Mourning's five NBA All-Star Invitations." Well, how about 14? Also, I'm going to have to use the word "out-quick" today. 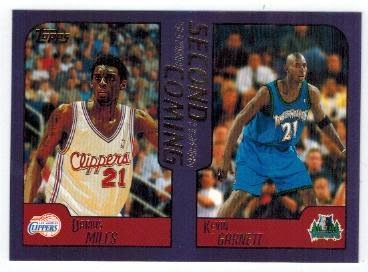 Card #287 Darius Miles/Kevin Garnett. I didn't know much anything about Darius Miles until reading this article, but apparently "With Darius Miles on the roster, the LA Clippers were one of the coolest teams in the NBA." However, this conclusion just brought me down: "Darius Miles was a troubled young man blessed with an incredible physical prowess. He was a player whose basketball career could have been something special." *Tear* 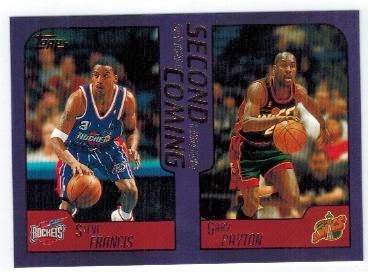 Last base card. Card #286 Steve Francis/Gary Payton. I like the Sonics logo, but I really have nothing else to say about this card.

Now we get to the good stuff. Remember, this was a hobby pack. So according to the back of the pack, overall odds for pulling an auto/game-used were something like 1 in 400, right? So here's what I found: 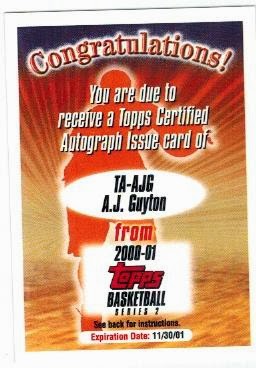 We beat the odds! Unfortunately, check out that tiny print on the bottom of the card. Over a decade expired! Ugh...this is the kind of experience that inspires Bad Luck Brian memes. 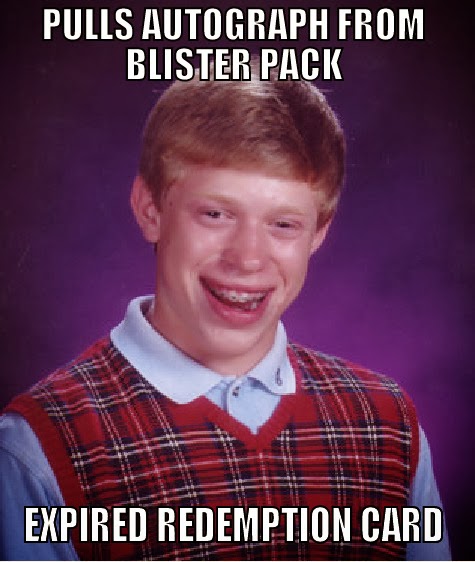 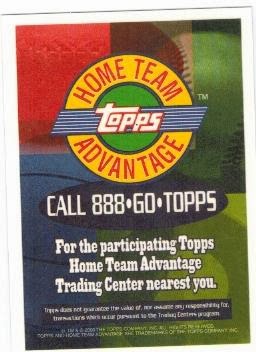 Also, this card was hanging out in the back, minding its own business. Since when has Topps had "Trading Centers"? 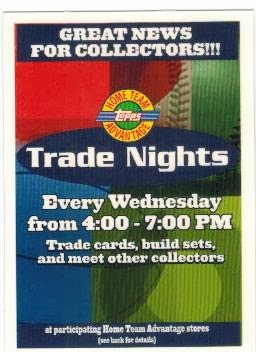 Triple the Exclamation Points = MAXIMUM EXCITEMENT! It is funny to ponder that blogs like this have pretty much filled this void: I've traded cards, built sets, and met other collectors through blogging. As they say, the internet made it possible.

That's it! If you need/want any of these cards (except the Mashburn), ask away in the comments or send me an email! Thanks all!

Find one of those trade nights on a Wednesday and see what someone will offer for the redemption.

An excellent suggestion. I should bring my 2001 Beckett Basketball Price Guide so I know how much to ask for!