Written by --David at 7:30 AM
On my site, I was blessed with a box of packs by the manager going by "Jacksonville Jobu." In that box, this pack of Japanese cards instantly caught my eye - as I'm sure you can imagine. 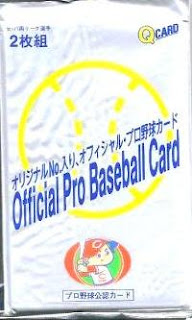 The wrapper is a silver material that is not foil. I guess it is plastic - very thing, like a trashbag feel to it. The front of the wrapper features Japanese writing, of course, but also the number "2" (indicating there are two cards, I discovered upon opening the pack). There is also the "QCard" logo and "Official Pro Baseball Card" on the front. That little guy you see at the bottom is actually the team logo on the top card in the pack. That is a little see-through window. 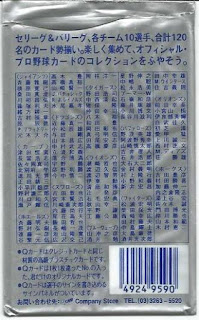 The back of the pack is chock full of Japanese writing. The 120 indicates there are 120 cards in the set (I discovered online through a convoluted search). Also on the back is a UPC code, a phone numbers, and a "Q-Card Company Store" insignia. 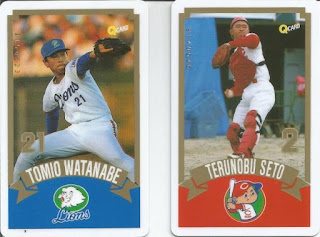 The cards themselves are smaller than our squared off traditional-sized baseball cards. These cards are also made of a stiff plastic and are made to resemble credit cards. The fronts feature a white border with a gold-ish inset border, the player, the player's name in English in an arching banner, the team logo is planted in the bottom center.

The backs of the cards have (presumably) bio and player stats. The upper right corner has a white sticker for signatures, which is a cool touch since these are supposed to mimic credit cards. Watanabe's card is the one on the right with the yellow highlight. I assume it is yellow because he was one of the great players in the league (according to Internet research). I could certainly be wrong about that.

These are certainly unique collectibles!

You can read more about these: http://japanesebaseballcards.blogspot.com/2012/05/q-card.html

These are cool. They remind me of those Perma-Graphics cards from the early 80's.

I like all of the great oddball issues that have come out in Japan over the past century or so.

You're right - the 2枚 part means "two sheets" as a literally translation.

In the middle of the pack front it says "Original (No) Inside, Official Pro Baseball Card"

Then there's a list of all the players by team in the middle.

The bullet points at the bottom are more promotional notes (plastic cards, original, numbered, there is a panel space for autographs, etc).

As for the card backs, the player's name is at the top, the little bullet point is how many years he's been playing, and in parentheses is his position. The bullet points below that are basic biographical data - in order they should be: jersey number, birthdate, hitting and throwing hand, height and weight, hometown or home prefecture (not sure), and blood type.

For Sato, the back text mentions that he was drafted in 1990 and gives some highlights of his career before the NPB.

The yellow box seems to be on all of the cards for players with statistics. Below that on Watanabe's card, again a mention of his draft year ('99), something about the Japan Series, and that he was an All-Star one time.

As NPB Card Guy mentioned, they aren't all over the place, but I see plenty of singles at better card shops.

Whoops, a couple typos or missed info. I should proofread. From "There's promotional text..." to "...autographs, etc.)" refers to the back of the pack. And Watanabe was drafted in '88, not '99.

Wow! Thanks for the info! Cool stuff to know!