2003 Pacific Quest For The Cup hockey

Written by JediJeff at 5:58 PM
Jeff back. Jeff back into the scan folder. Jeff back at Random.org. Random selected #12, and that means you get to see a pack of Pacific Quest For The Cup. I realize I put "hockey" is the subject bar - a bit of a "duh" moment, but best to be safe. This was a pack from a Target box of repacks. In fact, I believe I scanned 4 other packs from that box as none have been posted. We'll see when Random decides to give them a day in the sun. 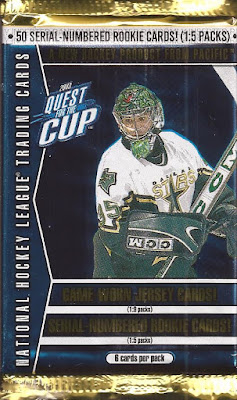 Technically, this is 2002-03, though that is not listed on the pack. Just 2003. But some good ol' junk wax, when they were passing out licenses left and right. Kind of hard to see, but this is a 6 card pack. You can pull serialed rookie cards out of every 5 packs or a jersey card every 9 packs. Pretty nice relic card odds 12 years ago. Marty Turco earns the pack photo - interesting choice as the Stars straight up stunk the previous year. But they must have received some mojo from the pack as the Stars topped the West in 2003, falling just 2 points short of the President's Cup. 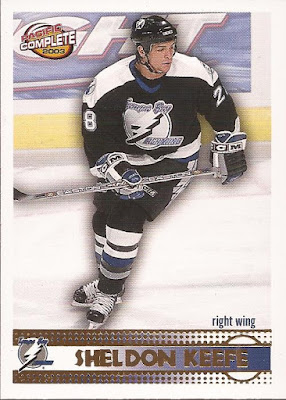 Lots of card designs in this pack, so we have a few back images to go along. This is a Pacific Complete card. I can't find a checklist for the set, so I am not sure how many are in this sub set. From a video I found, it appears you get one of there per pack, and there are variations. Pretty straight forward design. Maybe too much foil, but that was a whole new thing in the early 2000's, so the manufacturers overused it (and still do to this day). 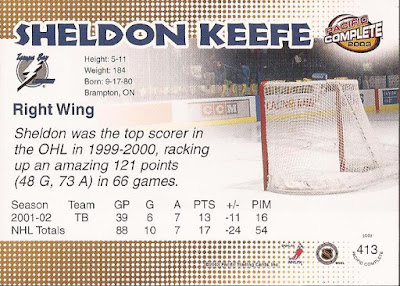 Back of the Complete card. Not sure what the deal is with the empty net. I assume that is the standard back design for this product. One year of stats and the total career with a little bio. The rear is dreadful. 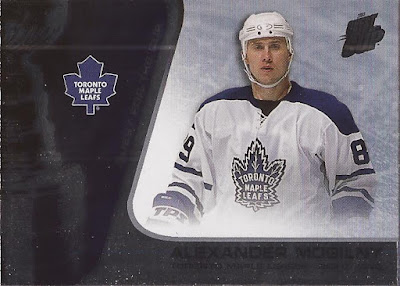 Here's your base, and it is all foil and scans like total shite. As a design, for the name of the product, though - it's good. Nice view of the Cup off to the left and a good image of the player. His name is right below, but hard to pick up in the scan. Team logo looks strange as it stands out from the foil design, but in all it's a decent card. I forget Mogilny was a Leaf for a while. 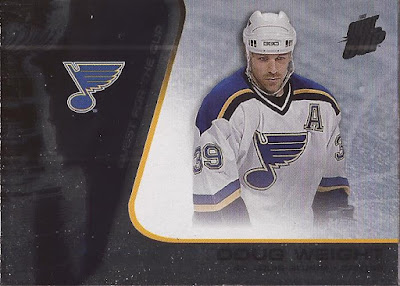 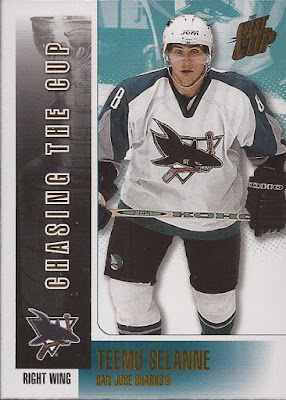 Chasing the Cup is an insert set. And sorry Fuji, but the Sharks will continue to just be chasing it and not raising it. Not unless they can figure out why they always hit a slump in late May of each year. This design is a bit busy. 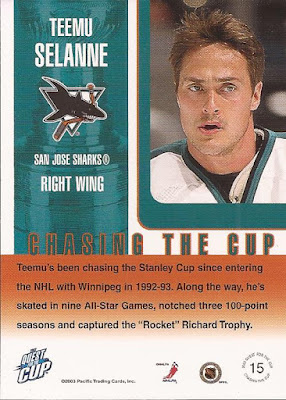 WOW! A second photo, and not of an empty net. Just a bio for the player. 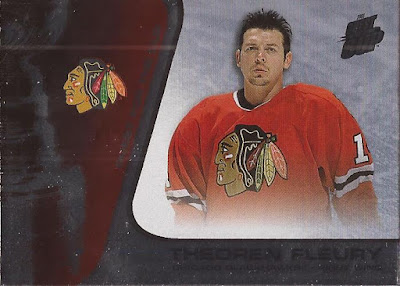 Good pack for me, as it had an Indian head sweater. Bad pack as it was Theo Fleury. Not sure what the Hawks were thinking when they signed him as he was such a head case back in the early 00's. Then again, when his story came out, it all made sense the demons he was battling. Don't hear much from Theo lately, and that was a shame because he was a decent player when he was on his game. I'm going to get this TTM'd. 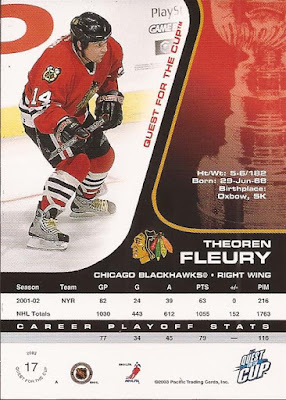 NICE!!! While you are only getting the past year and a career total, this is a great card back. Only complaint is the location and size of the card number. Otherwise, this is the kind of look a specialty set should have. 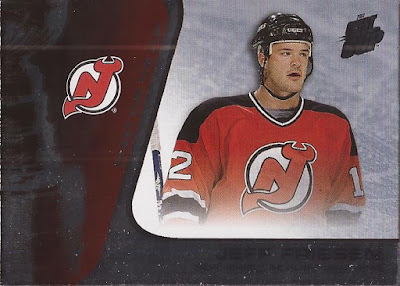 Close out the pack with Jeff Friesen, who got his name on the Cup the year this product was released.

Email ThisBlogThis!Share to TwitterShare to FacebookShare to Pinterest
Labels: 2003 Pacific Quest For The Cup hockey

Here is the complete 600 card checklist of Pacific Complete, with full scans or both sides of each card- http://www.tradingcarddb.com/ViewSet.cfm/sid/10437/2002-03-Pacific-Complete