Written by Jafronius at 10:59 PM
Greetings!

Hope everyone's doing well.  Printer/scanner problems were the culprit for my latest mini-vacation from posting; some error message popping up I've never seen before.  Then one day, poof, it's gone...the error message, not the printer.

Anyway, here's hoping I can get back to semi-regular posts, because the never-ending reorganization project started up again kinda, and I've got packs to publish.  Like this one...2015 Bulls-I-Toy Minions!


While I was happy to avoid paying the regular movie price, I was disappointed we had to pay extra for the 3-D format because it was the only movie time left at the non-regular movie price.  I enjoy a good 3-D movie, but being a movie directed at the kiddies, I was pretty sure the Mini-Me's weren't going to know the difference (I was right).  Here's the back of the pack for your perusal: 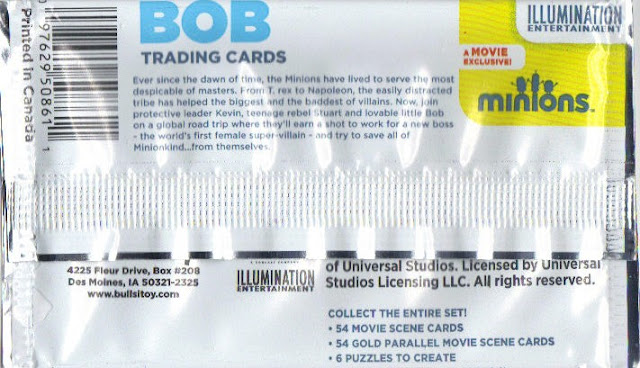 Bob is the name of the Minion on the front of the pack. Maybe there are packs with different minions on them, I don't know.  You get to see a plot summary and the types of cards you can collect also.  Take a look at the base set...54 cards???  That's it?  OK, you could try to get the gold parallel set as well, but I got 1 in the pack (sorry about the spoilers), so good luck building that.  6 puzzles is nothing, because you build the puzzles by completing the base set (darn it, spoiled you all again).  The scanner did cut off the last line, 18 Foil Character Cards, which come 1 in 4 packs (ha ha, didn't spoil you there, you gotta keep reading to see if I got one!). 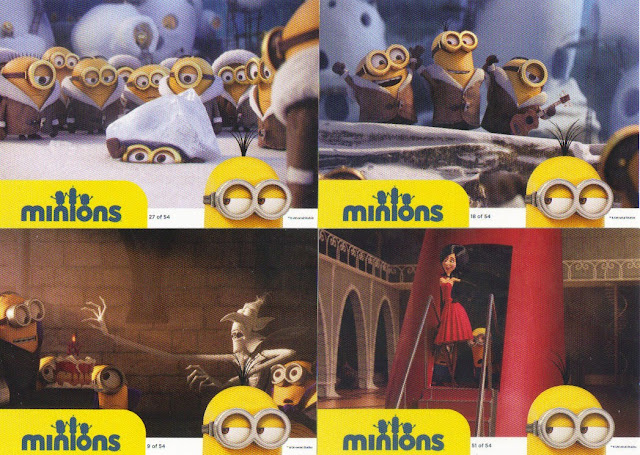 As you can see, these are images from the movie.  They're colorful and detailed, because it's an animated movie, and that's what gets the kids into the theater.  If you're wondering if the cards are following the movie, the answer is I don't know.  The Scarlett Overkill (Bullock's character) scene happens in the middle of the movie, not towards the end.  Then again, I haven't seen the complete set, so I don't know the distribution of images in the set and this is too much analysis for a movie about Minions. 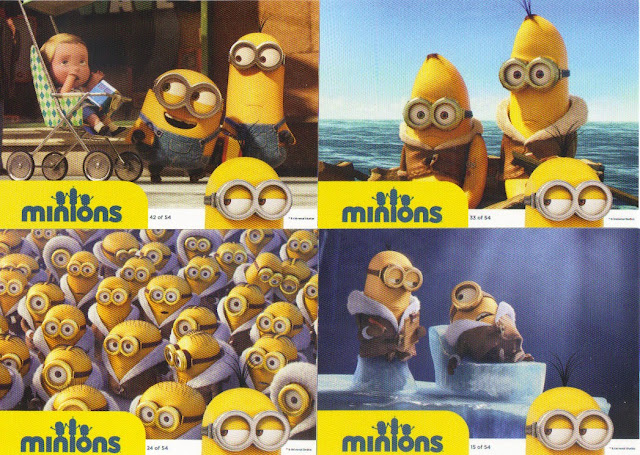 Again, I haven't seen a list of the images used in the set, but it sure does seem like most of the shots used for the set was from the "exile" phase of the movie, where the Minions lived in the caves after losing their latest master (Napoleon, I think).  I enjoyed these scenes the most; the rest of the movie was a pretty standard plot. 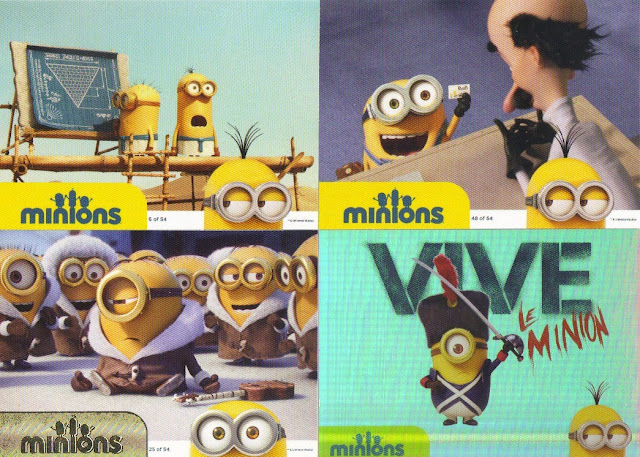 The Bob card above was from a nice sequence where the three Minions go to Villain Con to find a new master.  It was an obvious send-up of Comic Con, complete with vendors and big presentations.  IMDB notes a quick cameo of Gargamel from the Smurfs, so that's something.

As you can see, the gold parallel is just the Minions name covered in gold foil.  And I did get a shiny Character Card.  Hooray!

The backs of the cards are puzzle pieces that when put in pages will complete the picture.  Here's the #24 and #27 together, as well as the back of the foil card: 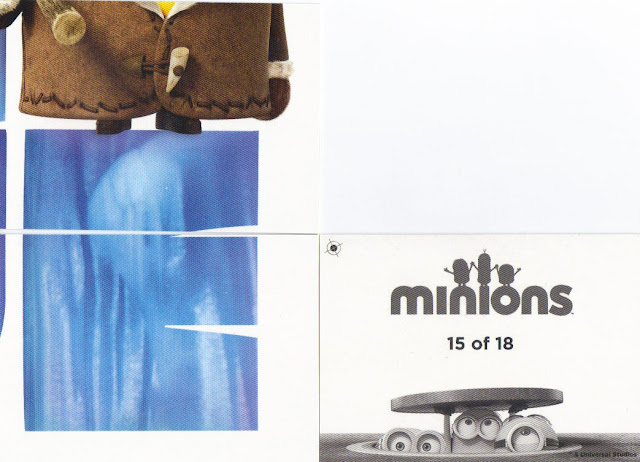 Anyway, that's the pack.  I picked up the pack for the Mini-Me's to see if this would be something they would want to collect.  They liked the cards (especially the foil card), but I haven't heard a peep about it since then.  Oh well.  That's all for now...thanks for reading!

I don't know how well it will do, but it seems fairly well done for a set of this type. They used decent screen shots for the card images, and 12 cards per pack isn't too shabby.

The Vive Le Minion card should go to Kevin, the Card Papoy. He's a French Minion fan - it's a match made in heaven!