Written by Matt F. at 6:08 PM
Taking a look at the Target card isle (which had been missing in action for a few weeks from my favorite Target as they installed some self checkouts where they trading cards used to be) I was surprised to see what looked like Batman v Superman cards. I hadn't heard any news about a card set for the notorious film and after getting a closer look, sure enough, they weren't cards but metal magnet cards instead. 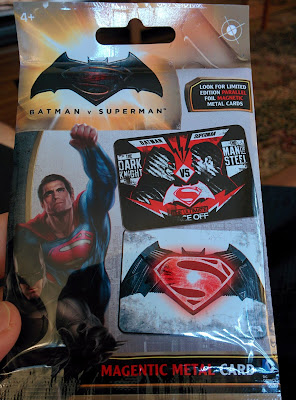 You get one metal magnet per pack at a rate of $1.99 each. Parallel foil cards fall every four packs but scanning the wrapper I was sort of at a lose as to what exactly I would be pulling. 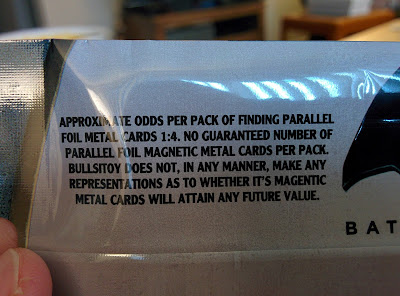 The pack wrapper only highlights two designs but I have to imagine there are at least 10 different ones. Thankfully, there is a guide packed into the wrapper that is a visual checklist. Some look like propaganda posters and some are just interesting logos and it looks like you can pull a Wonder Woman magnet as well.

Here's the opposite side with some more designs. I wish they would have given us an idea what the limited edition foil versions looked like as I doubt I will ever see one in person.

And here is my magnet, a Batman "Vigilante Justice" that may or may not be Ben Affleck in the suit. It looks like it could just be a basic Batman design instead. 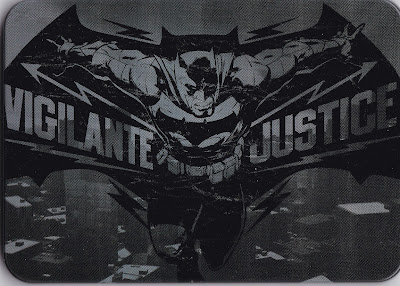 And I think it fits in nicely on the fridge. 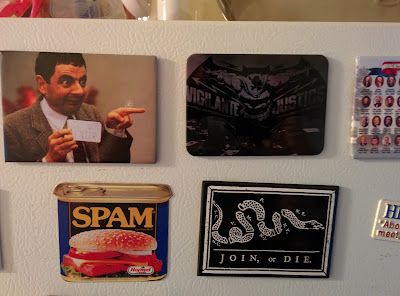 This product is interesting... but ultimately not for me. Now if I could buy a pack of SPAM magnets... then that's a different story.

Man, if they made Mr Bean Magnetic Metal Cards, I'd be all over that set...

I pulled the exact same one. But I'm a bigger fan of those snazzy presidential magnets.