While searching for cards and unopened packs to buy, I came across a pack of Corvette cards I had not seen before so I grabbed them up. Ever since I was a kid in the early 70's, I have dreamed of owning a Corvette. The dream still holds, and these cards - especially one of these cards, as fate would have it - take me to that dream world.

There are 8 cards in each pack. The cards are 2-1/2" x 4-11/16" so they are closer to old school Bowman than to standard issue baseball cards. According to the wrapper (which highly foiled), these cover 'Vettes from 1953-1996 and may contain Milestones Chase Cards or Fast Lane Chase Cards. There are also inserts for Factory Tour and Duntov.

The fronts of the cards themselves feature high-gloss, full color pictures of the featured car, along with the Corvette logo that adorned the car, the year of the car, the Chevy logo, and a gold shield proclaiming "Heritage Collection." Each card has a border that extends into the card in a photoshopper's dream of a project. 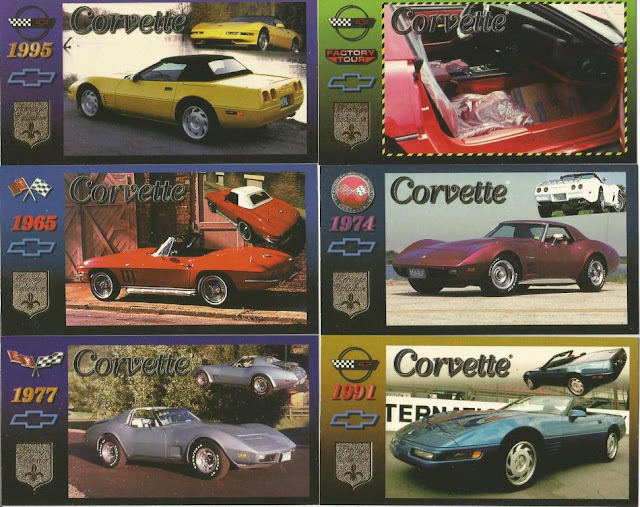 The very first Corvette I ever actually rode in was my uncle's 1974 brown Corvette. It is the car i would love to start my Corvette ownership with (not his, but a 1974 for sure). My uncle ended up selling his, but I will never forget what it was like to be an 8-yr old riding in that machine.

The card backs provide information about the featured car, including production run and base price. Wow, the base price sure has changed since the days of the cars featured here... Though, I suppose comparatively speaking, they are probably not too far off. Then again, today's base 'Vette runs about $55,000. Not sure how that compares to the base price of a 1965. 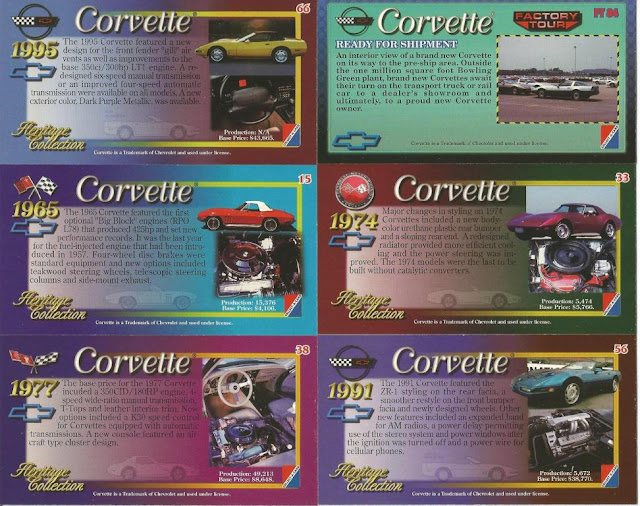 Back of the wrapper:

I bought a hand-collated "set" of these cards at a card show circa 2000, and it was missing the final three cards. I still have not been able to track them down!

Man, if I had bought a bunch of these, I might have pulled what you needed. I'll keep that in mind. If I buy more, I'll happily give you the ones you need if I pull 'em!