Written by Jafronius at 10:42 PM
Greetings!

Hope everyone is doing well.  We're in day 3 of the 2017 baseball season, and Cubs fans are very excited to root on the team's defense of their championship.  Here's to a fun season.

This post is going to be a little more personal than most, as I present 2 retail packs of 2017 Topps Opening Day!

Since the Cubs won the 2016 World Series, my boys have become fans of the game.  MLB Network off-season programming plus Game 7 and the subsequent parade on the DVR certainly helped build interest.  Eventually, discussions about WAR and home run leaders started popping up between Pokemon and silly Disney XD shows.

So finally, it happened a month or so ago...the boys were asking for baseball cards.  They knew daddy has a lot of baseball cards all over the office (which they weren't allowed to touch), and there were new packs on the Target shelves...with Kris Bryant on the cover!  But there was a problem...they didn't know how to take care of the Pokemon cards they did have (cards on the floor, in the bed, in backpacks), and ol' Jafronius wasn't about to spend money on cards for them to ruin, cards that could be in his stacks in the office.  You see, ol' Jafronius wasn't too big of a fan of The Wifey dropping over 4 bucks for a pack of Pikachus, but he didn't mind it because he wasn't invested in the product. Now these little punks want a piece of the action...real people (on cardboard) were at stake!

So, a plan was hatched...Jafronius went to the LCS to get a couple of binders and pages for the kids, and they were told to put all their cards in the pages.  Daddy would then check on the binders from time to time and see how they're handling the cards.  If they took care of them for an extended period of time, they would be rewarded with their first packs of baseball cards.

The kids were enthusiastic to take on this task, fueled by the knowledge that 30 years ago, my brother and I got our first packs of baseball cards, a reward for good grades.  Since packs were what, a quarter back then, we wound up splitting a whole box of '87 Topps from that Walgreens.

I'm not sure how long I was planning to test the kids, but life decided for me.  Last week, The Wifey had emergency surgery to remove scar tissue wrapping itself around her intestines (she had gastric bypass almost 2 years ago).  The kids found out about it when we were on the way to the hospital to visit her, and they were subsequently disappointed when we got there and found out they couldn't go up to see her because of some flu outbreak and kids weren't allowed on the floor.  So, we turned around to go back home, and I decided to get them their first packs to make them feel a little better.

I let them open the cards, but then I took them away so I could take the pics.  Meanwhile, they discussed who they wanted to get.  They both wanted Cubs, but other superstars were mentioned as well.  Here's what they got: 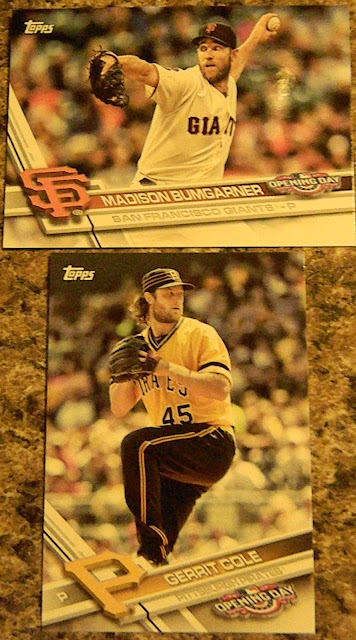 My youngest was pretty excited to get Madison, since he was one of the names he rattled off. 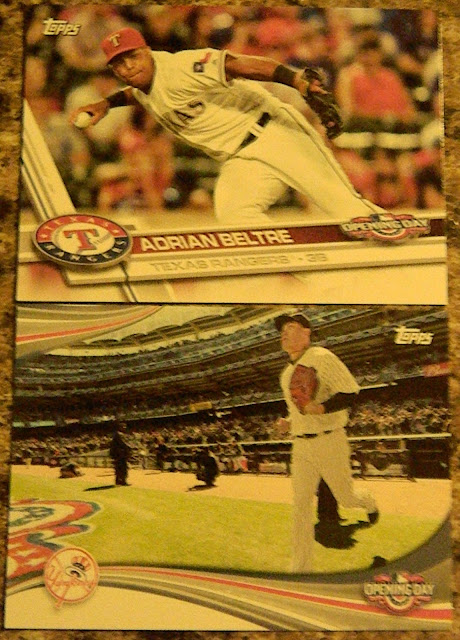 I explained that the Yankee card was an insert, but he was more happy that he got a Yankee card since his uncle (my brother) lives in New York.

Same goes for the Harvey...it's a Met card so that's fine because Uncle lives in New York.

Here's some backs from the first pack: 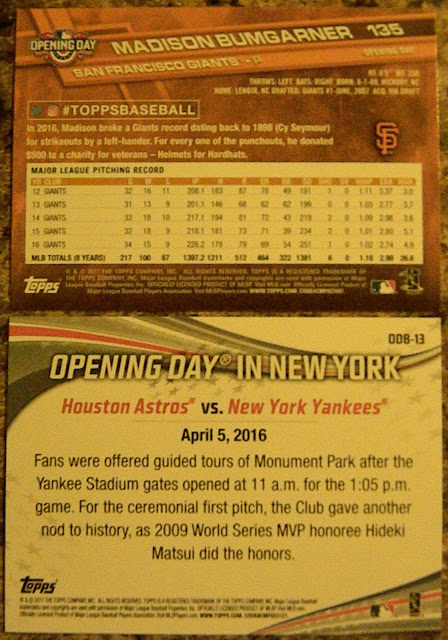 Overall, my youngest wasn't too pleased with the pack, as he was hoping for more recognizable names.  Let's see how the second pack went. 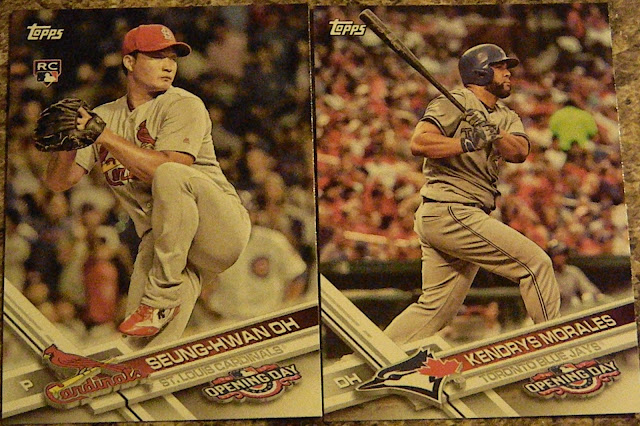 My oldest wasn't as pleased with his first ever baseball card, as he didn't know who he was.  I'm sure he'll know more about Oh as the season progresses. 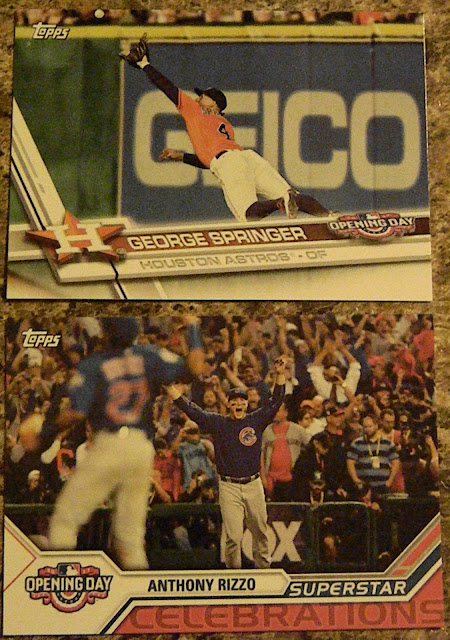 I smiled when I saw that he got this one, as Rizzo's his favorite player.  I secretly moved this card to the end to be the last card he sees. 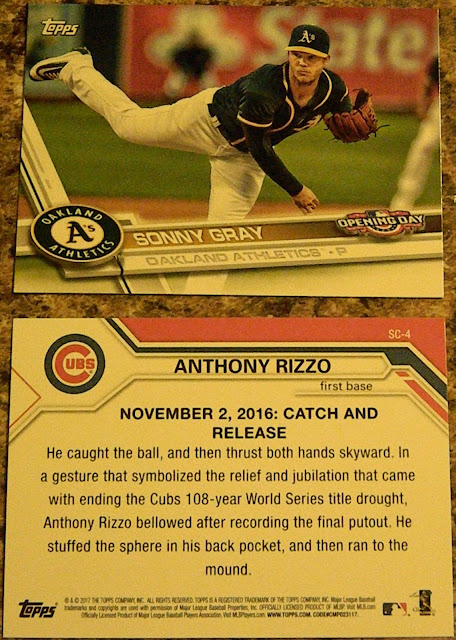 Yep, the boys chose two packs and got 2 duplicates.  After the confusion died down, I showed them the Gray and the Rizzo (the back's scanned above).  The plan worked, as the eyes on those two became so wide you'd think they were gonna fall out.  Then came the celebrations of pulling an insert of a Cub player.

They immediately put the cards in the binder, and as far as I know the cards have stayed there.  They both got another pack since, and the oldest son pulled the Rizzo base card, which led to similar celebrations.  I think they're angling to get more packs down the line.

Anyway, that's all I've got.  Thanks for indulging me with the documentation of their first baseball packs.  I don't know how long they'll stick with it (the oldest son appears to be on track to keep collecting), but this was a fun moment for me and for them as well.

Great story. Thanks for sharing!
I hope they stay interested!