Written by Community Gum at 5:11 PM
I figured I'd switch things up a little bit around here and give you 4 packs in 1. I was out hunting for 2011 Topps and saw this little guy staring me in the face.

Now, I know this product has been featured here before, but not an entire rack pack. And I know it may not be the most popular product with the bloggers out there, but curiosity got the best of me...as well as my interest in anything shiny. Let's face it, dangle a spoon in front of my face and I'll be entertained for a while. All I'm saying is someone should put out a shiny sports spoon set. While I wait for that, here's this whole thing. Let's start with the bottom half. 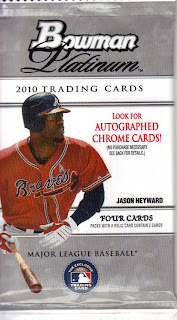 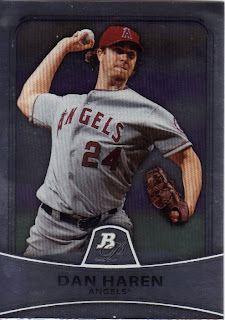 #80 - Dan Haren - Okay, nothing to write home about design wise. The borders overtake a good portion of the card and precious little is happening within said borders. 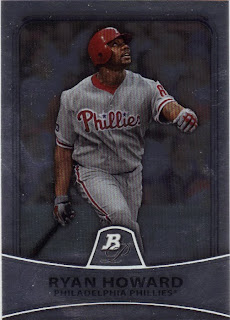 #62 - Ryan Howard - Something about R. Ho bugs me. I can't really put my finger on it, but I can't get on the train. He, like Prince Fielder, seem destined for a big drop off in production right quick. 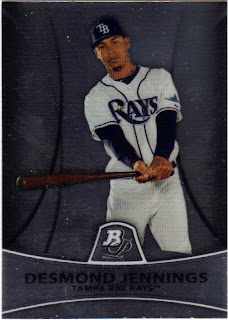 #PP2 - Desmond Jennings - It wouldn't be Bowman if the numbering wasn't wonky. Here we have a prospect card of someone with MLB experience. I know rookies with limited time can still be considered prospects, but come on. Jennings compares to Carl Crawford according to the back.

#43 - Manny Ramirez - Can we start a petition to monetarily penalize any broadcaster that uses the phrase "Manny being Manny" from here on out? It makes me want to punch faces. 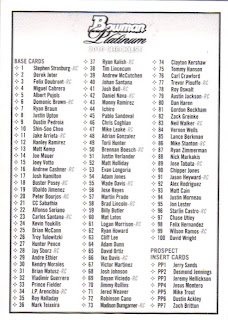 Checklist - For a set with only 100 veterans, some of the choices probably could have been better. On to the second pack. 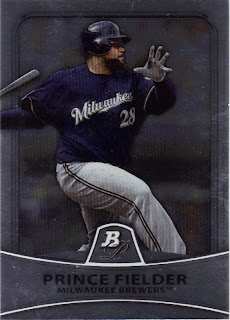 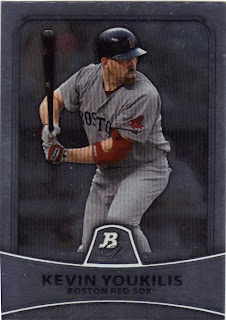 #24 - Kevin Youkilis - Mr. Wacky Stance Pants. I always thought he was more of a slugger than he is. With career highs of 29 HR, and .569 SLG, I have to temper that opinion some. 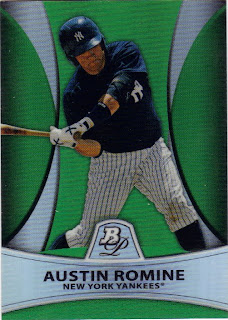 #PP19 - Austin Romine - Green Refractor #195/499 - A normal veteran refractor falls 1:3 packs. A regular prospect refractor falls at a ridiculous rate of 1:87. This green prospect refractor comes in at an astounding 1:174 packs. These prospect cards should show birthdates as that's something of a value of worth for them as they rise through the ranks. The guy compares to Russell Martin, and the back estimates he could reach the majors in 2013. Maybe I should hang on to this for a while? 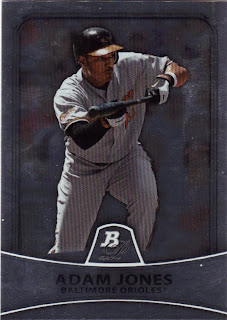 On to the Top half, which will give us one more 4 card pack and our special 3 card purple prospect refractor pack. I will say that it'll be tough to beat what we've already seen. 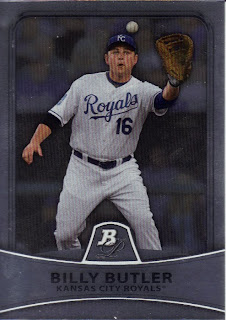 #59 - Billy Butler - If dude has to concentrate that hard on catching a ball, KC's in some serious troubs. 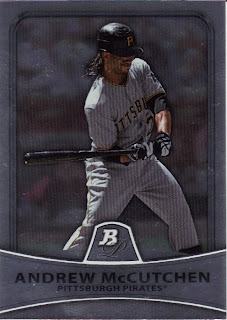 #39 - Andrew McCutchen - If Cutch has to strain himself that much just to slap what looks to be a groundout to short, Pittsburgh's in some serious troubs. 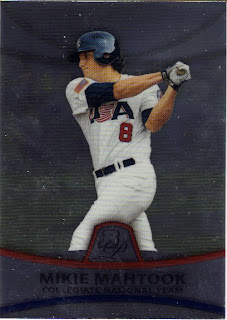 #PP40 - Mikie Mahtook - The USA cards are the nicest looking cards of the bunch. I know it looks like poo scanned, but trust me. It's nice. They have some color. They're "prospect" cards that have a background. Sure the background can't possibly be from the same picture (as that would have Mikie batting from half way down the first base line and in the wrong direction), but it's still a background. 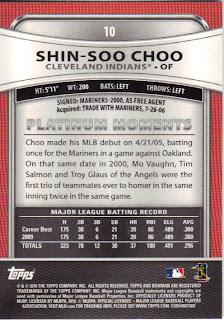 #10 - Shin-Soo Choo - I haven't shown the back of these yet, so here you go. The oddest part of this set is the Platinum Moments. All the vet cards have them. You'd think by the name that we'd learn about a career-defining moment of the player. Nope. It's just a this day in history of some other person. Kinda weird. 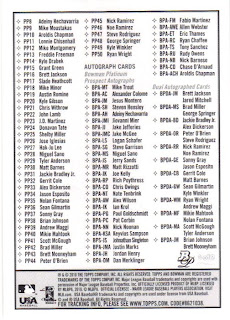 Now the moment you've all been waiting for. I have no idea who we might get in this pack. 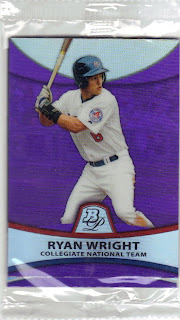 Yup, it's a complete mystery. 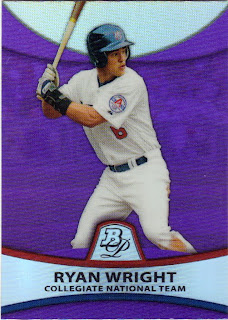 #PP50 - Ryan Wright - The purple makes these USA cards look even better. This kid looks really surprised that a ball is flying towards him. He shouldn't as he hit .361 for the team. 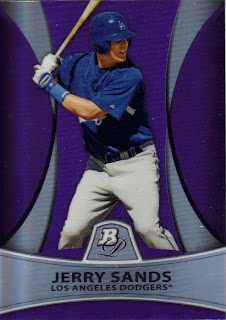 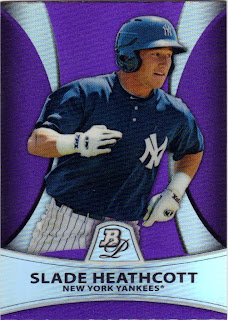 #PP17 - Slade Heathcott - Compares to Grady Sizemore. Again, it would be nice to know age on the cards. He was drafted in 09, so I assume he has a ways to climb still. But, two colored Yankee prospect refractors can't be a bad thing (to use for trade bait, that is).

If it weren't for that green refractor, I don't know if this would have been worth the purchase, but it was still fun, and I love the look of purple refractors regardless, so I'm happy. I doubt I'll be buying any more, since no one I collect is on the checklist. It's a good feeling to quit while I'm ahead for once.

I'd sign your petition in a heartbeat. I'm so sick of "Manny Being Manny"

I'm not sure, but at this point, I take it that when people refer to "Manny being Manny," I'm pretty sure they are just saying in a nice way "Manny is a douche."

The Card Investor, I could not have said it better! Being a Rays fan I've got a long year of "Manny being Manny" calls ahead of me this year.

I was really disappointed with platinum this year. The green refractor really makes the break worthwhile, nice pull.

At my local hobby shop they did a 6 box case rip of this...$40 a slot and I got the Astros...I got three freaken cards! Nobody got anything worth anything! This pack I would have been happy with since you got two Yankee Rookies!

Sure, I'll trade any and all from this pack. Shoot me an email - communitygum at gmail
--Jon

Great pull on those 2 Yankee rookies. Romine is in Yankee camp compeating for the back up job to Martin with Montero and Cervelli.