Written by Community Gum at 8:21 PM
In preparation for the Super Bowl, I bring you a football pack from a simpler time in card collecting. The year was 1991. Everyone was wearing neon colors and snap bracelets. Tecmo Super Bowl was hitting store shelves and children everywhere would quickly discover that a hail mary pass to Jerry Rice or a run by Barry Sanders will get you a touchdown every possession. But enough reminiscing. Let’s open. 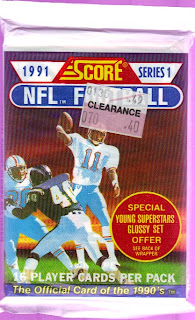 I want to know what office Score had to contact to become the official card of the 1990’s. I think the “unofficial” cards were probably more popular as these were on clearance. Maybe everyone spent all their money on virtual football rather than on cards. 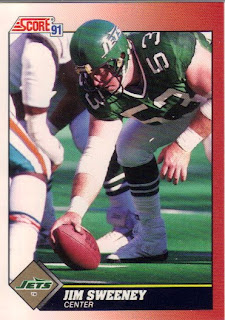 #203 - Jim Sweeney
Yup. This is what centers do. I’m not going to recognize most of these names. I always have been a very casual football watcher and even more casual collector. 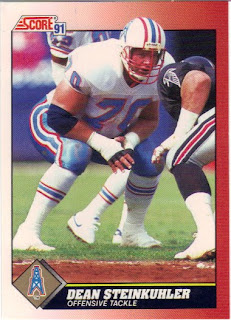 #217 - Dean Steinkuhler
He’s looking right at the camera. Hey Dean! Game’s out there! There have been no stats on the back of the cards so far. Instead they’re going with a paragraph of text. 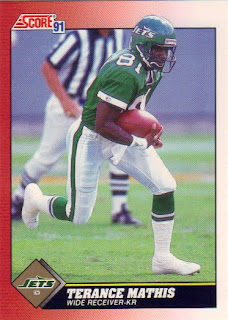 #114 - Terance Mathis
The action shots aren’t all that action packed. I guess Score got lazy after being named “official” card of the 1990’s. 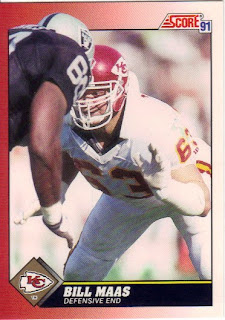 #126 - Bill Maas
I don’t get why Score bothers with borders if they’re just going to have someone’s helmet stick out of the top on every card. This guy was a Pro Bowler according to the back. Any relation to Kevin from the Yankees? 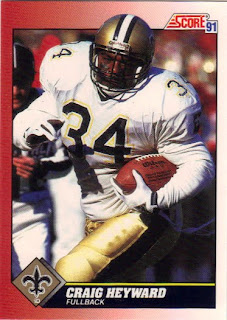 #134 - Craig Heyward
This is the best picture I’ve come across so far, but it’s also the second one with only the ref in the background. Heyward had the awesome nickname of “Ironhead.” It sounds like a G.I. Joe character, doesn’t it? 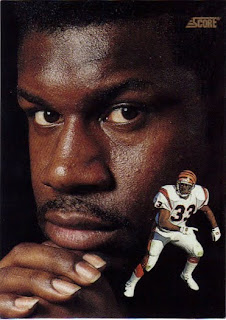 #335 – David Fulcher – Dream Team
This year’s Dream Team cards were well designed. You can just tell Fulcher is dreaming of not being on the Bengals. I like the mini-action shot, too. “Guys, I’ll just be over here if you need me.” 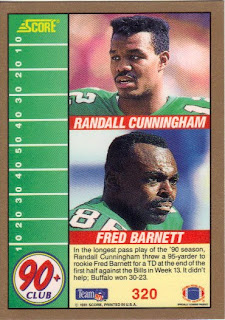 #320 – Randall Cunningham/Fred Barnett – 90+ Club
Ah, a name I can recognize and a haircut I can appreciate. Nice of Score to show us how the field is laid out. 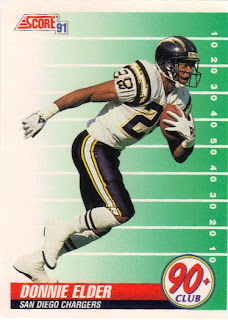 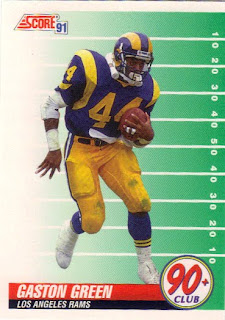 #322 – Gaston Green – 90+ Club
Gaston looks more like he’s dancing. This is what happens when you completely remove the background in order to show off the most basic design scheme possible. 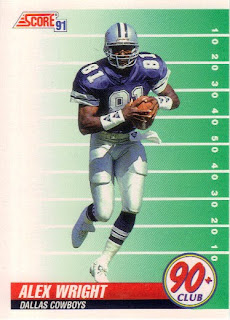 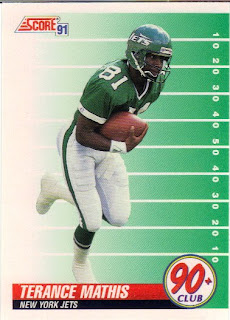 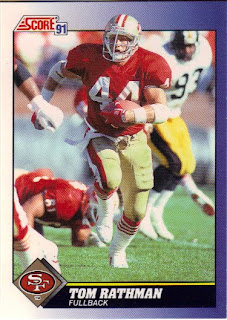 #88 – Tom Rathman
Yup, I used him on my Tecmo Super Bowl team for a couple short yardage TDs. This is a pretty good action shot, too. The lack of depth of field really enhances the image. 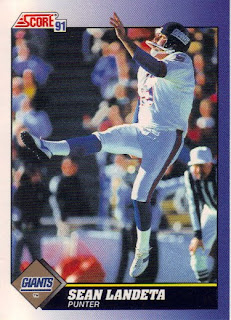 #92 – Sean Landeta
Is he A) finishing a kick; B) celebrating a kick; or C) auditioning for Swan Lake? 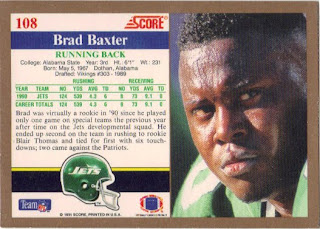 #108 – Brad Baxter
Here’s the back of the regular cards. This one has stats. He looks like he’s about to cry. 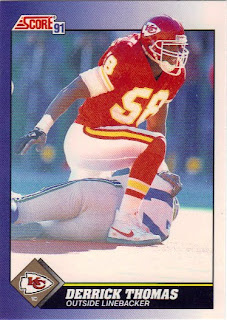 #5 – Derrick Thomas
This guy was a beast. Tragically, Thomas passed away after a car accident ten years ago. Great shot of him just sitting on a QB until he gave him his lunch money, though. 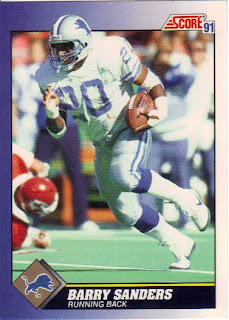 #20 – Barry Sanders
Even with Thomas, Score saved the best for last. The Chief’s player lying down in the background should tell you everything you need to know.

Not a bad pack. I do kind of like the look of the set, but can someone explain to me the Red and Blue borders? Was this Score being random as they did sometimes? At first I thought there was an AFC/NFC distinction, but nope. I feel like there is something to it as all the red cards are in the front and the blue in the back. If it was pure randomness, they would be mixed, no? Anyway team, until next time, keep dreamin’!

1991 Score had some other colors on the borders too. Black, purple and green being a few. All fading to white like the ones you pulled from the pack of course. No idea what each color represents though.