Written by Community Gum at 10:00 AM
Now that I've actually finally found 2011 Topps, I've been buying up a ton of the stuff. And I feel like inundating you all with images. For instance, I recently bought a blaster at Wal-Mart 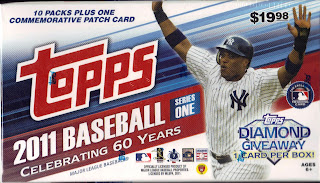 These packs come with fewer cards than in the normal retail looseys, so obviously this version of the product deserves its own post. Oh, and don't think I've forgotten about the black background pack or the commemorative patch. Those are coming soon. Chagrin away! 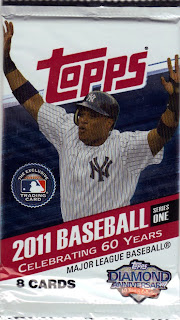 But for now, here's our "fun size" pack. 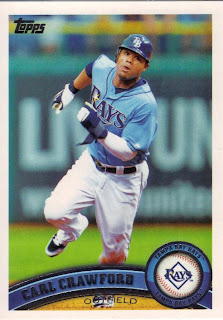 #25 - Carl Crawford - Here we see the outdated Rays version of the card. Obviously, it needs the photoshop treatment and needs to be inserted SP style. It would be stupid not to do that. Maybe they can photoshop his tongue back into his mouth, too. 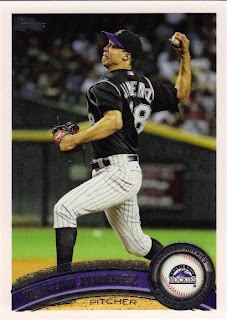 #141 - Ubaldo Jimenez - Checklist - It was almost inevitable that his ERA would rise back to normal levels in the second half, but I was rooting for the guy. 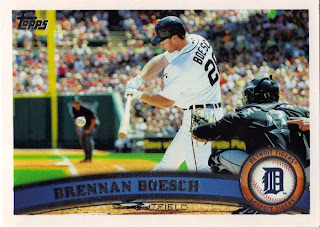 #175 - Brennan Boesch - Very cool horizontal picture. And a card where you can play "Name that Molina." 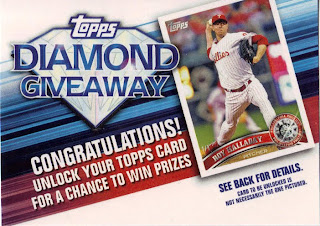 #TDG6 - Roy Halladay - Diamond Giveaway Code Card - I haven't entered any codes on the site yet. It's a tough call between selling them for a couple bucks or digging my way to the anniversary set. Also hoping there will be times when they only spit out pre-1980s like last year. Thoughts? 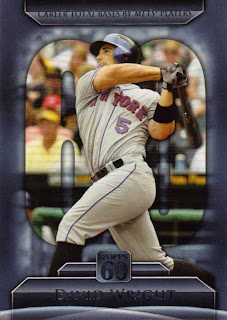 #T60-27 - David Wright - Topps 60 - These replace Peak Performance and the concept is good enough. The achievement at the top of Most career total bases by a Met sound solid. Until you turn it over and see that Ed Kranepool and Darryl Strawberry are still ahead of Wright. Why not feature them? Why's it always gotta be about the new guy? Can't Eddie or Straw get no love no more? 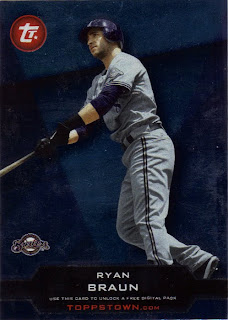 #TT-30 - Ryan Braun - ToppsTown - Someone I work with recently called him Gonzo. You know, on account of the eyes. Can't say I disagree. 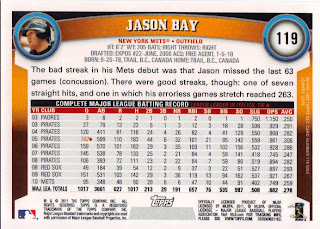 #119 - Jason Bay - Injuries hampered this guy and he hasn't really been the same since leaving the Pirates. Let's hope he can bounce back, for the Mets' sake. Angel Pagan can't do everything. 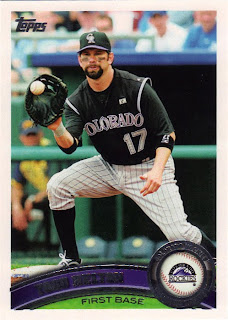 #220 - Todd Helton - Since he's on the Rockies and not a slugger, it's easy to underestimate Helton's talent. But take a look at the back of his card sometime (not now, because I like the picture enough to not show the back). He had a couple off years, but when he's playing full seasons, he's really good.

Short and sweet - and half inserts. Blaster packs shouldn't be allowed to have ToppsTown cards. And they should have a maximum of one insert card per pack UNLESS you get the full 12 cards in each blaster pack (with the same number of packs). I'm not going to stop buying blasters until they change, but I'm still mostly going to feel ripped off.

Todd Helton and Larry Walker were pretty much the offensive catalysts in the leageu back in the late 90s. Those two were hella good.

Bay actually had a good year in his full season with the Red Sox (2009). In retrospect it looks like they did the right thing letting him go...