Written by Community Gum at 10:54 PM
Here we are. Last of the blaster packs. The main event. Patchin' it up! 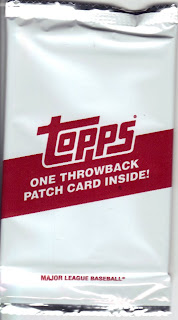 One mystery card per pack. It's so much of a mystery that Topps decided to not include a checklist on the side this year. It could literally be anyone! I could even be on this with a little manufactured gum pile patch to represent the blog. You never know. So who'd I really get? 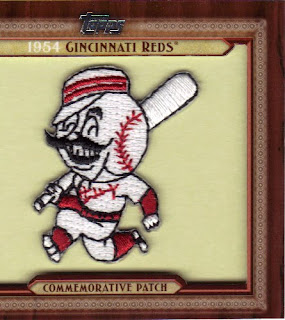 I know this post is going to be short, so I had to stretch it out a little bit. So we know it's a Red, thanks to Mr. Red here. And it says 1954. Hmmm....any guesses? A google search of the Reds roster from 1954 gives me no indication. The closest person I can find that Topps might consider using on their cards is Joe Nuxhall, but if he's making an appearance, then this checklist must be huge. 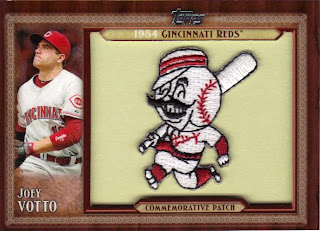 OF COURSE! Joey Votto! Why wouldn't it be? But hey, if there's any current Red it could be, at least it's my most hated Red. Sigh.

Oh, and the card number on the back is TLMP-JV. So, yeah. No idea how many different patches they made for this series based on that. Last year had 50 each series, I believe. Since they seemed to double everything else, production wise, I wouldn't be shocked to see 100 names total. And probably Joe Nuxhall's name.

I have a Chase Utley patch from last year, if you would prefer Mr. Utley to Mr. Votto. Let me know if you would like to trade.

My bad...e-mail me if interested in Utley... jasontcarter at gmail dot com.

Ifyou end up with the Nuxhall patch, it will, of course, have a 2010 Reds patch on it. Of course.