Written by The Angels In Order at 9:25 PM
I saw this pack on Listia, put a couple bids on it and won.  I had never seen these before...
until I opened the pack. 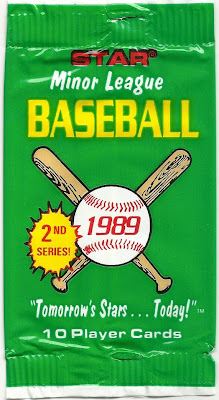 Ah, yes.  I see these all the time when I'm digging in the 5 for a dollar bins.

I know these are minor league players before they've made it to the Bigs, but it seems that I never find a card of a guy that I'm sure has made it to the Majors, even as a "minor star".

Let's see if any of these have.

Pedro Munoz - 7 years, 6 with the Twins.  There's my minor star I suppose.
Mike House - nope.
Jaime Roseboro - never made it.

Lem Pilkenton - Only 2 Lems and 1 Lemmie have ever played in the MLB and this guy wasn't one of them.
Chris Butler - no.
Michael Maksudian - He doesn't look like a Major Leaguer, but he is! 1992-1994.

A little background from the 2010 Standard Catalog of Baseball Cards says that with the first series Star became the first card company to venture into minor league cards.
So this is the second series to the trailblazing first issue.
Cool.

Michael Maksudians Wikipedia page says the following: He was famous for consuming insects in the Jays' bullpen during his time as a backup catcher

I found this too: During his World Series speech at the dome, despite virtually nobody in attendance knowing who the hell he was, Maksudian vowed to tattoo a Toronto Blue Jays logo on his buttocks.  To see if he delivered, re-watch the 1992 World Series video.  You might notice a partially naked rear being spanked at the end.  Well done Mike, well done.

I got to see Munoz play a lot as a member of the Portland Beavers (AAA - Twins) back in the day.