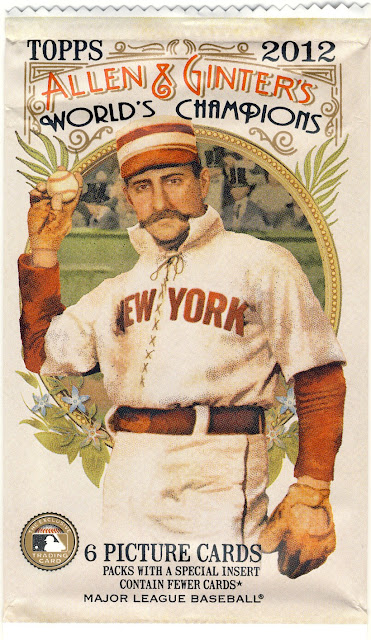 I purchased a blaster of 2012 Allen and Ginter last night and here's the best pack from the it.  I didn't get any relics in this blaster but this is a very strong pack.

We begin with what has to be the best looking card from this year's set.  This is clearly my favorite card I've pulled from any 2012 pack and I'm definitely going to track down multiple copies of it.
Last week Tony La Russa decided that Matt Cain would start the All-Star game instead of R.A. Dickey one of the reasons given was that it would mean Buster Posey would have to catch for the knuckle baller and it seemed like La Russa felt Posey wasn't able to do that.


I believe this Cal Ripken Jr. card is a short print which fall in 1:2 packs.  This cards seems really familiar to me in that I think it is close to an image that Upper Deck used on their Masterpieces packaging.  I tried to search it out but I can't locate it.  Maybe I'm just crazy.


And here's another card that will piss dayf off.  This year's Allen & Ginter have done away with the famous portrait on the back of their minis and replaced it with an "A&G" shield.  Personally, not a fan as well. 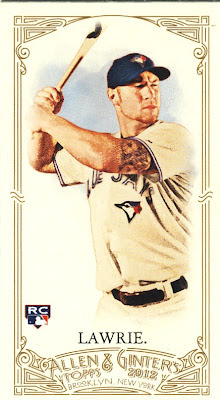 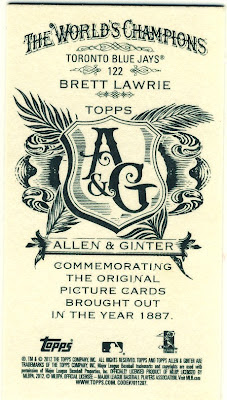 And last but not least, another Hall of Famer.  The A's green and gold uniforms really jump out at you from the white card stock.

Heck that Aaron is as nice as ANY card from any pack for 2012. Very nice.

"We begin with what has to be the best looking card from this year's set."

You do know Kate Upton is in the set, right?

I reject the reality that Kate Upton has a baseball card and choose to substitute my own reality.

THEY ERASED HIS HEAD. And his bare hand reaching for the ball. Which is the most interesting part of that photo. That card is bad and Topps should feel bad. At least they didn't murder Old Planter in Willow Cove.

The Ripken card is a sign that computers have fully taken over at Topps. Yes, I get that each name ends with a period and "Ripken Jr." has a period in it. Only a cold, lifeless machine would include both periods.

If no one had mentioned the periods, I wouldn't have noticed, now I can't stop looking at them. The Chipper card, epic fail.