Written by Jafronius at 3:47 PM
Greetings!

Hope everyone is doing well.  Congrats to Barry Larkin on making it to the Hall of Fame.  Growing up without cable in meant only being exposed to National League teams, so when it came to shortstops, he was the best overall player at that position I’ve seen.

Here’s a pack which I assumed was already on here.  Turns out we just had the Target variation.  Here’s some 2009 Topps Series 1! 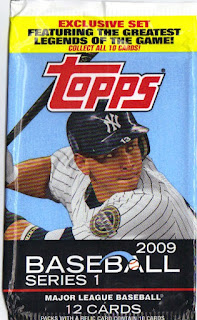 It’s a 330 card set that appears to please most collectors.  Here’s the pack:

Topps appeared to have stepped up their photography for this set.  I like the playfulness of the Classic Combos cards. 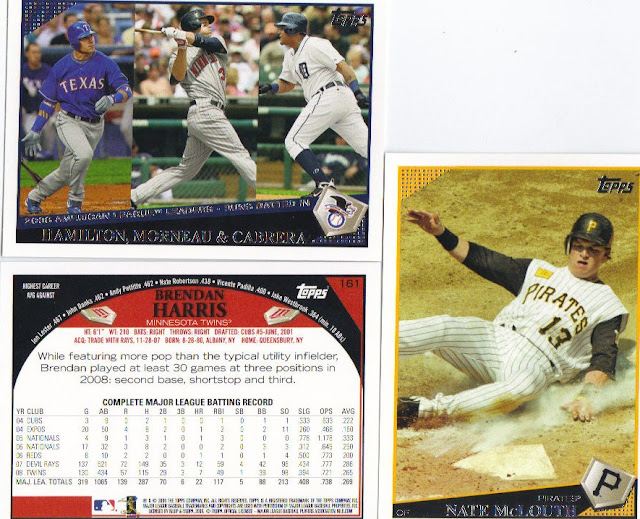 Overall, I like the random stats in the arch at the top of the card.  I understand the Six Degrees of Mantle concept, but it got tiresome to always connect it to The Mick.  They could have expanded it to include other legendary players...is Brendan Harris somehow connected to Jackie Robinson?

ToppsTown still should not count as a card.

That’s the pack.  Count me in as one of those collectors who enjoyed this set.  Have a good week everyone, and thanks for reading!

Series 1 had a lot of nice photos. They kind of lost their minds with Series 2, though.

Any way I could get that Salty/Hamilton off you? Maybe we could do a PWE for PWE trade or something.

Also, is it just me or does that Duchscherer look like hes wearing sweat pants?