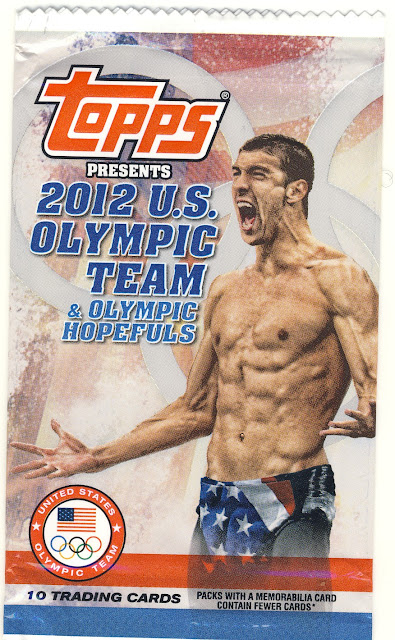 The Olympics has already started [I enjoyed some women's soccer this afternoon] and the opening ceremonies are on Friday and I can't wait.  For the first time in two Olympics I'll have the full spectrum of Olympics related channels [which this year will be NBC, NBC Sports, MSNBC, CNBC, and Bravo] so bring on archery, badminton, and judo! You can find a schedule here.

Now let's get to the cards.  They feature cards of athletes that will be possibly taking part in the 2012 Olympics.  These were printed long before the Olympic trials so I'm sure there are some cards in this set feature athletes that aren't actually able to participate in London.  Let's take a look and see what I got.

Dana Vollmer will be swimming in the 100-meter butterfly and 4x200 meter freestyle in London.

David Oliver won bronze in Beijing but didn't make the Olympic team in the 110-meter hurdles in London unfortunately.

Evelyn Stevens will be riding in two events the Individual Time Trial and the Road Race.

Hope Solo is the US Women's Soccer Team goalie and the women's team has already been busy and defeated France in the first games of the London Olympics.


Tyson Gay along with Justin Gatlin will be America's chance to earn gold in the 100 meter dash.

Rau'shee Warren is the first American to qualify for the Olympics three times in boxing.  Warren boxes in the Bantamweight category.

Each pack also gives you two foil stamped cards resembling gold, silver, and bronze medals.  My two cards are of gymnasts Nastia Liukin and Aly Raisman.  Liukin didn't make the 2012 team while Raisman is on the team.

They need to make these cards a little lower res. Everyone looks like a scary Terminator

Is it just me or do most of them look a bit weird?