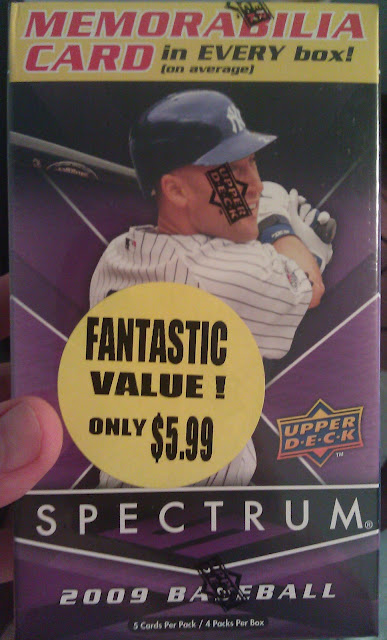 If you ever pass a K-mart in your neck of the woods they sometimes have some pretty nice deals on older blasters.  If you are working on the 2008 or 2009 Upper Deck flag ship sets they are the place to check.  I have purchased five or six of these very same Spectrum blasters mainly because you get a relic card in each.  And so here is my relic pack from a recent blaster:


I enjoy the busy design and I enjoy pulling a Big Hurt card.

And my relic turned out to be Arizona Diamondback Justin Upton.  Upton had a great 2011 season and this year he's been the center of trade rumors to teams such as the Red Sox, Tigers, Yankees, Pirates, and Blue Jays.

Very nice. I think I'm up to like 15 of those now. The relic checklist is excellent. Great Upton; If I hadn't already gotten one, I would be all over it.

How much are those blasters going for?

I got my first Tim Wakefield PC hit in a blaster of Spectrum from K-Mart. A jersey card.