Written by JediJeff at 12:01 PM
The new kid. The evolution of the hobby. The game changer.

Welcome to 1989 Upper Deck baseball. This is the pack that changed the hobby forever. New card stock. Unique photography. Back side images. Holograms. Everything in our hobby changed when these packs hit the market, especially considering the first card that Upper Deck released. Somehow, my LCS got in a box of 1989 Upper Deck. I bought a pack since I do not own a copy of card #1. Let's see if I am now an owner of one of the hobby's most iconic rectangles. 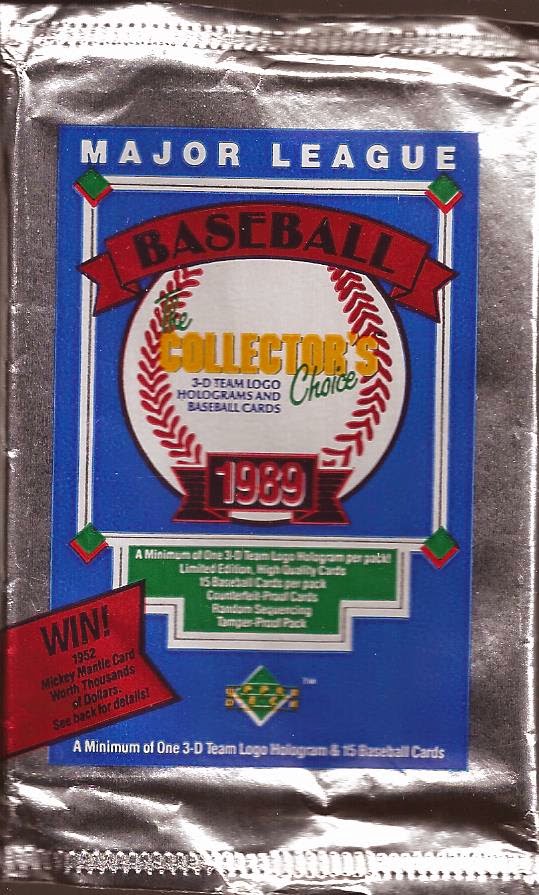 Wax wrappers were another change in card collecting after the release of Upper Deck. Who remembers these foil packs? You could win a Mantle, according to the front. Plus - 15 cards. FIFTEEN!!! And I think that was for a buck if I recall. Let's go three at a time.

The familar 1st base path design, that they continued thru their next three years to complete the baseball diamond. The Ellis is poorly framed. UD got better in the coming years.

We start seeing UD different take on the images with the Shelby and the Slaught.

Almost a PATP with Pena. And look - a real checklist. If I had to guess, before I ripped the pack open, I would have known one of the 15 cards was a checklist. When these were common place in sets (as opposed to the "checklists" they have now), I pulled one in dang near every pack I purchased.

Well, I got a rookie, but it wasn't Junior.

I am sorry for those that got the Chris Berman nickname in their head with that last card. Let's turn over the cards and show the best 3 reverse sides.

Ruffing blowing bubbles. That is the type of shot that won the fans over to UD, among other reasons. The pack also said I would get a 3D team logo hologram. I got two!

Well, today is Father's Day, which means Panini packs, which means if there are still packs left in this box, I am buying a couple more. There's gotta be a Junior in one of them, right?

Thanks for finally posting this pack. I made a reference to it when I posted the 1987 Topps baseball pack. Now we've got a "real" site since the major packs (realistically) are now up here!

I'll admit I scrolled to see if you got the Griffey, then went back and read the whole thing.

There's nothing like pulling that card from a pack.

I am not one to pay much attention, obviously. I had no idea that the designs on the cards made up a baseball diamond over the course of 3 years. I'm glad you included that bit of info! And, yes, I feel like a doof.