Written by JediJeff at 4:28 PM
Whoa - been far too long since I wrote something up here. And it's not that I don't have the packs to post - I have a good dozen folders worth of cards. I need to get the heck off my lazy behind and do something besides work on cars, mow the lawn, work in the yard, do laundry, wash dishes, work my career, feed the dog, clean the bathroom, fix the wifi, fix the cable, take out the garbage. I mean - look at all the free time I have. I'm such a bum.

Anyway - I picked up a package of Chipz specifically to post. Hope I pull some White Sox. Topps had to go the super crapton of variations even with the Chipz. Along with glow in the dark, magnetic and who knows what else, there are rainbow Chipz. 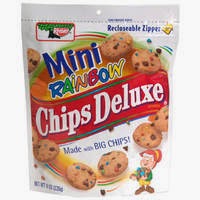 Four Chipz per pack, which was the same amount as the inaugural release. Let's teach kids poker! 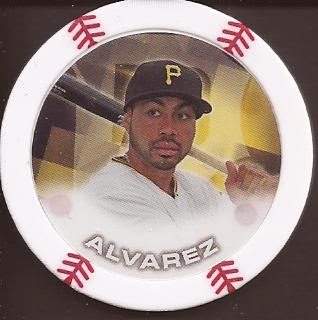 Pedro Alvarez is first out of the pack. I like the design a little better over last year, but not by much. Unless there are some action shots, I am not liking the posed pictures. But the name is not as intrusive as it was on the 2013 release. Not a White Sox - going to Battlin' Bucs. 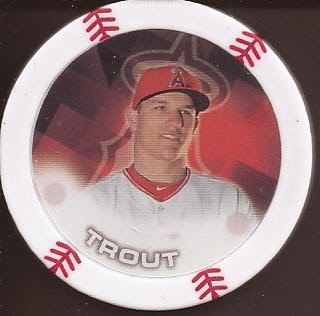 MVP Maid of Honor Mike Trout is number two in the pack. He's having a bit of a slow start this year, so let's see if he can turn it around and win that plaque. Not a White Sox, so this is going to Plaschke. 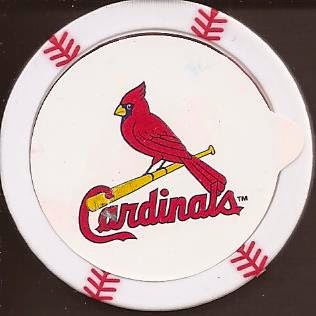 You receive a team "sticker" in each pack, which is really just a vinyl round you can put on anything it will stick to. The sticker matches the team the player underneath is from. So instead of pulling it off, here's a good excuse to scan the back. 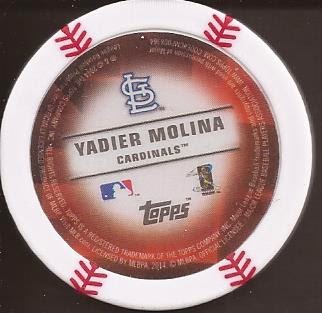 So we have a Yadier Molina. Again, not a White Sox, so I'll be giving this to Kerry at Cards on Cards. 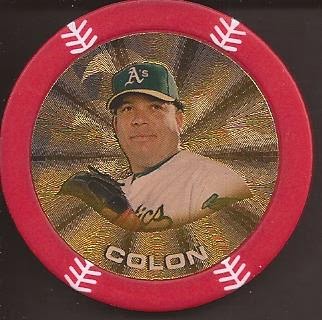 Well, we get a colored Chipz, os well traveled Bartolo Colon. The red with the gold foil is painfully hard to view. Plus, not a White Sox. Looks like this is heading west to Fuji.

Chipz are fun. I don't mind getting the White Sox Chipz in my collection. Not sure I would ever chase a set of them, though.

I like the Chipz and there are only four Indians, but there is, like, nine different variations ! I have some dupes but not a single Sock.

I've yet to pull a Cardinals Chip(z), so that Yadi is good news to me! I've got some interesting stuff to send you that I'm working on currently.