Topps Archives has become one of my favorite sets in the past few years. Cool old school designs (great for TTM autos) and a mix of today's players and yesterday's stars. It doesn't just focus on the clear cut hall-of-famers like many insert sets in current products, it also highlights some of the great fan favorites of baseball history. It's not uncommon to see players like Bill Lee, Fernando Valenzuela, Graig Nettles, and Andy Van Slyke.

I haven't had a chance yet this year but when I saw the rack packs in my local Target I thought I'd preview the product. 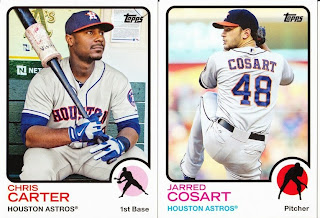 First we have two Houston Astros, Chris Carter and Jarred Cosart. Carter struck out 212 times in 2013. 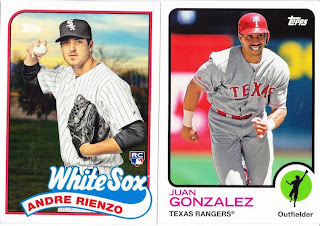 Her we have Andre Rienzo and Juan Gonzalez. Gonzalez had 434 career Home Runs. 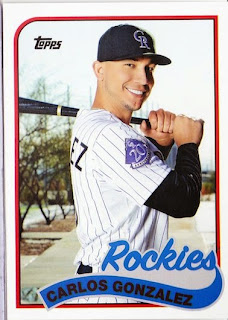 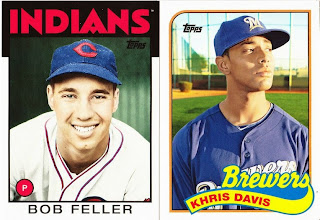 In the 1989 Topps Design we have Carlos Gonzalez and Khris Davis, and Bob Feller in the 1986 Topps Design. 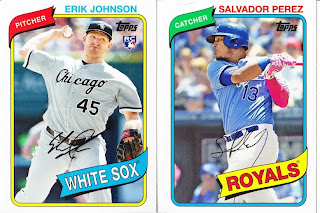 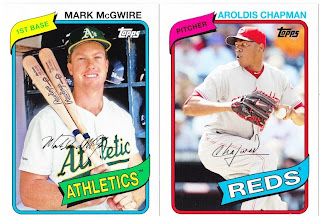 The 1980 Topps Design is one of my favorites, perhaps due to the famous Rickey Henderson rookie card I chased after and (and found, twice). But here we have some current players and Mark McGwire. 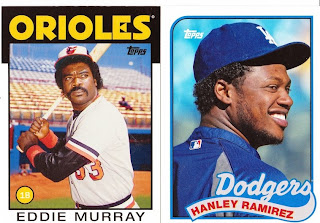 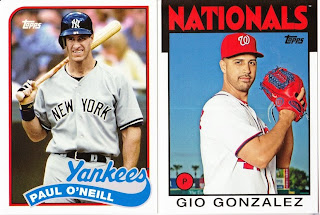 Here are some more in the 1989 and 1986 Topps Designs, including legends Eddie Murray and Paul O'Neill. 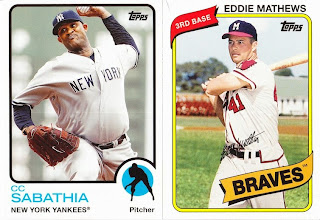 CC Sabathia and Eddie Mathews. I wonder how that matchup would work out?

Finally, I was lucky enough to pull this in my retail rack pack... 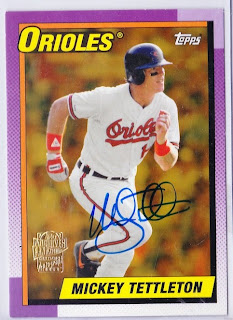 Mickey Tettleton Auto in the 1990 Topps Design. This card is serial numbered 49/50. Tettleton made 2 all-star appearances and won 3 silver sluggers.

Pretty nice to get a parallel auto in a retail pack!

Hell of a great hit in a rack pack!

Good stuff! I bought 4 blasters all from the same place and had almost the exact same base cards in all four. So I've got like 3-4 copies of 60 cards from the set, but didn't see any of these. That HanRam photo is the same one they just used for Heritage.

Thanks for the looks guys! Whats interesting is looking at the checklist I don't see any parallel's numbered to /50 so I am wondering if all of the non-parallel autographs are /50? It would seem like too few cards but I'm not sure

Long-time reader, first-time commenter. Thanks for all the fun posts.

Wondering if you'd trade that McGwire card. I collect his cards, and that's a nice addition!

Josh Bob... I don't usually do single card trades of base items but I bet if you break a couple packs youll find one.