Written by Fuji at 4:00 PM
I recently purchased four packs of 2005 Helmar trading cards.  If you're not familiar with this product, then welcome to the club.  There's not a lot of information out there about these packs, but there's a website for this brewing company.  I'm just not sure if they still actually sell beer.  Any beer connoisseurs know?

From the looks of it, their focus is selling hand-made art cards for serious sports enthusiasts.  You can check out their eBay page here.

Let's take a look at the pack:

Each three card pack comes in silver foil packaging with a picture of a baseball player on the front.  The back contains the company's web address along with a shipping address where "winning tickets" can be sent.  I'm pretty sure they are referring to the scratch offs located on the card backs (see below).  Unfortunately, winning tickets expired more than a decade ago.

And here's what I pulled... 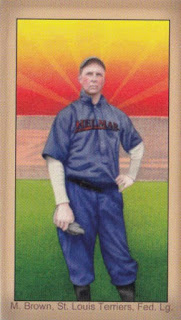 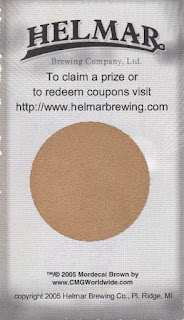 Right out of the gate, I pulled a name I'm familiar with.  Mordecai Brown was a hall of fame pitcher who spent the bulk of his hall of fame career with the Chicago Cubs where he compiled a record of 188 wins, 86 losses, and a 1.80 ERA during his 10 seasons with them.

I love the look of these cards which seems to use a combination of the T206 design and T205 gold borders.  Mordecai's head seems a little small for his body, but that colorful sky really makes up for it. 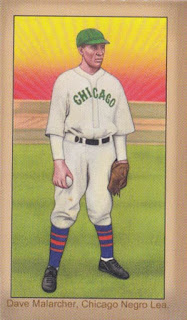 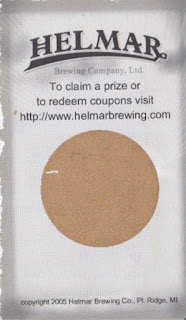 The second card in the pack was a Negro League player who spent the bulk of his career with the Chicago American Giants.  I wasn't familiar with Gentleman Dave Malarcher, but according to Bill James, he was the fifth greatest 3rd baseman in Negro League history.

One thing you might notice is the chipping on the back along the borders.  Based on an eBay description I found, this is pretty normal for this product. 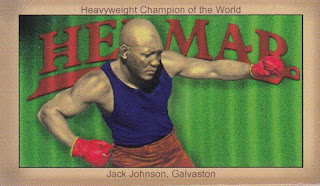 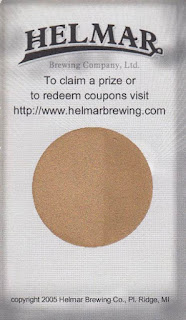 The third and final card is my personal favorite, because it reminds me of an advertising poster or something and it features one of the greatest heavyweight boxers of all-time.  Jack Johnson was the first African-American world heavyweight boxing champion and won 73 fights during his career that spanned four decades.

His 1910 bout against James J. Jeffries has been called the Fight of the Century.  Johnson delivered the only loss in Jeffries' career.

Overall... I was pretty pleased with my first pack of 2005 Helmar.  I really enjoy the T206 card design, the colorful background, and the mix of baseball players and boxers.  What about you?

Would these fit into your collection?

Email ThisBlogThis!Share to TwitterShare to FacebookShare to Pinterest
Labels: 2005 Helmar

TO my knowledge, they USED to make beer. I actually have three bottles of it. I bought a 4 pack, but it's far too hoppy for me. The bottles are pretty sweet.

Not sure if they are skunky now, but if a certain Bob Walk fan ever came to town, I would crack a bottle for him to try.

It's kind of hard to tell, but I think ole Three Finger Brown has all of his digits on that card. Just sayin'!
I received my first Helmar car the other day and I really like them. I couldn't believe how thick the cards were.