Written by Billy Kingsley at 3:45 PM
Today, February 18th, 2017 is National Hockey Card Day in both the USA and Canada. How it works is, if you visit a participating hobby shop, you get some free hockey cards. Pretty simple, no? They've been doing it since 2009 in Canada and 2012 in the USA, but since I just began to collect hockey, this is my first one participating. I'm not sure how big a deal it is, but I didn't roll into my local shop until 3 PM and I was the first one to ask for them. Hopefully it will continue because let's face it, all card collectors love oddball issues. I was afraid they were going to be all sold out-even more so when I discovered that somebody had come in and purchased just about every hockey box in the shop since my last visit a month ago-but I was lucky.

The set primarily includes American born players on American teams, but the Toronto Maple Leafs make an appearance with Auston Matthews being both card #1 in the set, and a special bonus card #16 that usually only comes with a purchase of UD cards, but since I've been a regular at my shop for 17 years, and they had no more hockey cards to purchase, I got one of them too.

The set is not just current players, there are retired legends as well. There are also some super rare autographs as well but I was not lucky enough to pull any of them.

One thing to watch out for, about half the cards I pulled had damage on the back, this was something done at the UD factory, because of the fact that the cards underneath them did not always have damage. 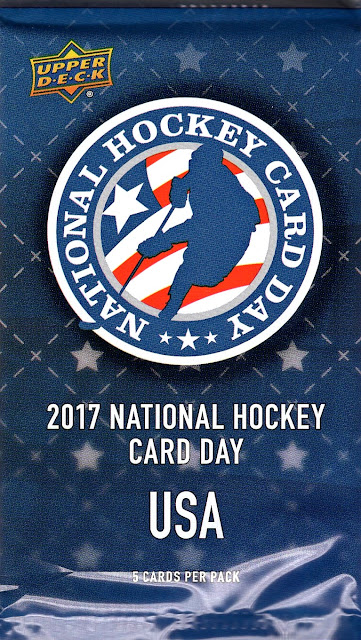 First out of my first pack was Jimmy Vesey, a rookie on the New York Rangers. 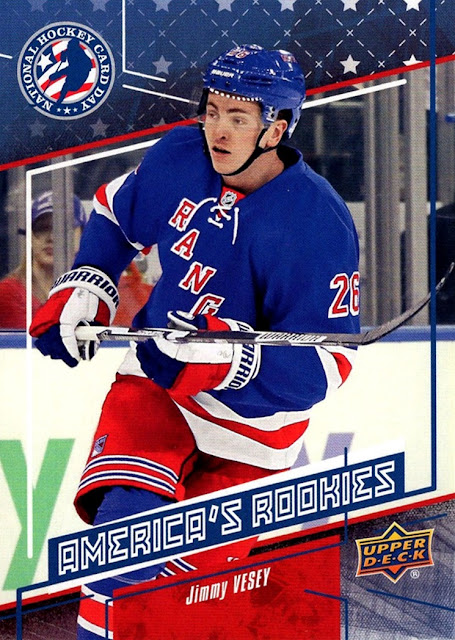 Following him was Bill Guerin, one of the legends in the set. 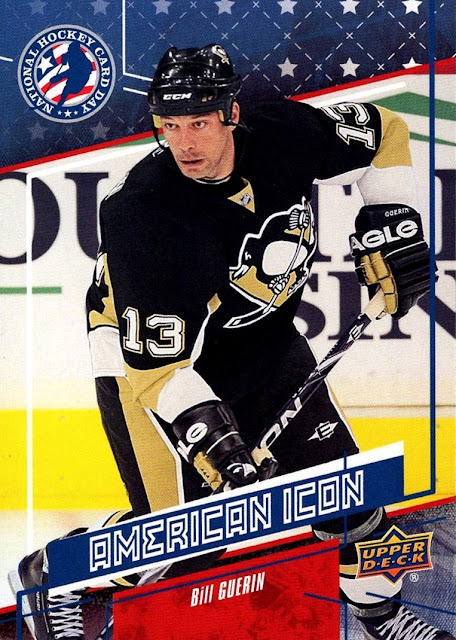 Dylan Larkin came next...and appeared in my second pack as well. I know it's a small set at only 15 base cards, but a duplicate is still a bit disappointing. 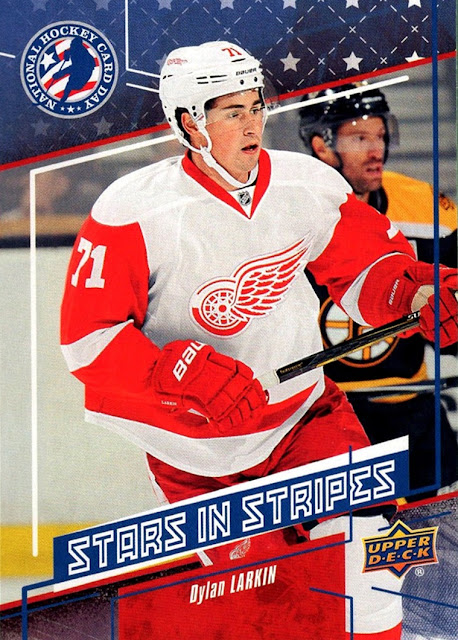 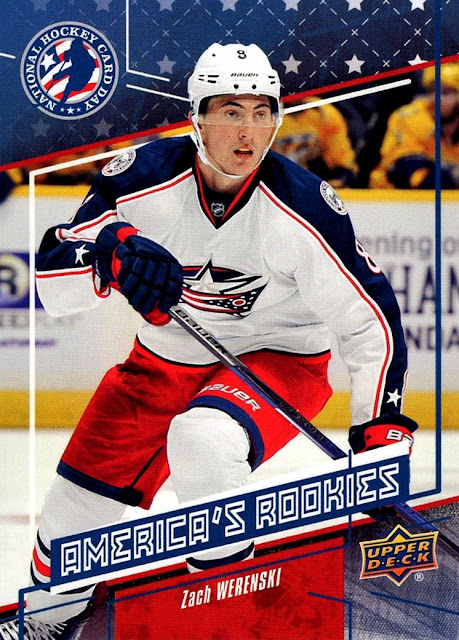 And the final player card was another legend, Ed Olczyk 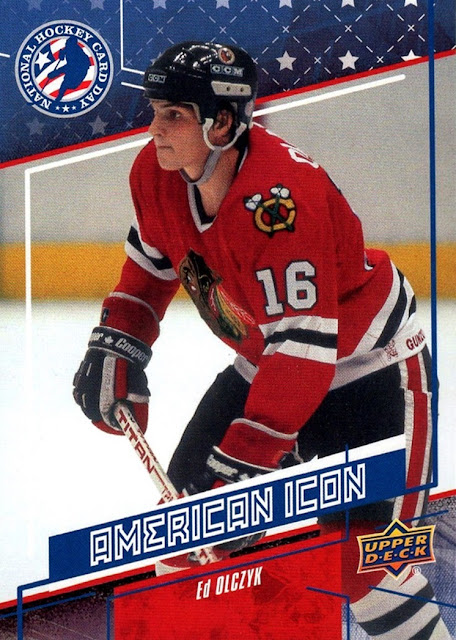 Although not counted as part of the pack, each pack I opened also included a checklist card, which is great. I love checklists. 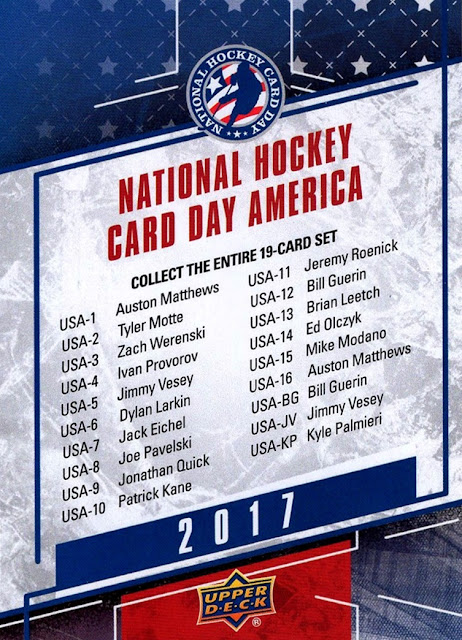 Here's the back of the regular cards. The one thing I would have done differently was include the player's hometown. After all, the set is built around American hockey players, so it would have been nice info to include. 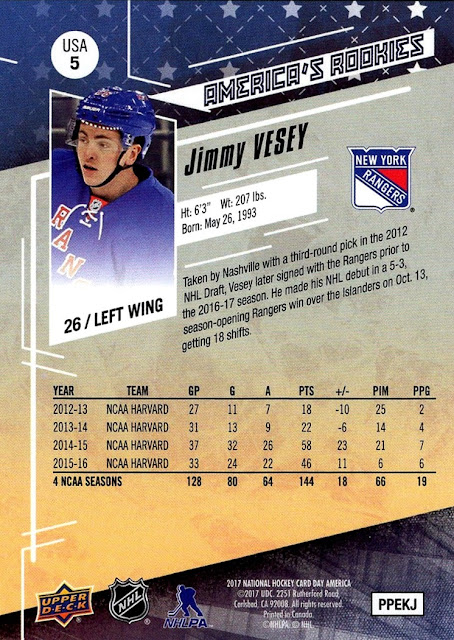 As an added bonus, here is the Auston Matthews bonus card that doesn't come in a pack. It is my first official hockey card of him, as he previously only appeared in my multi-sport collection. My first cards of Vesey and Werenski as well! 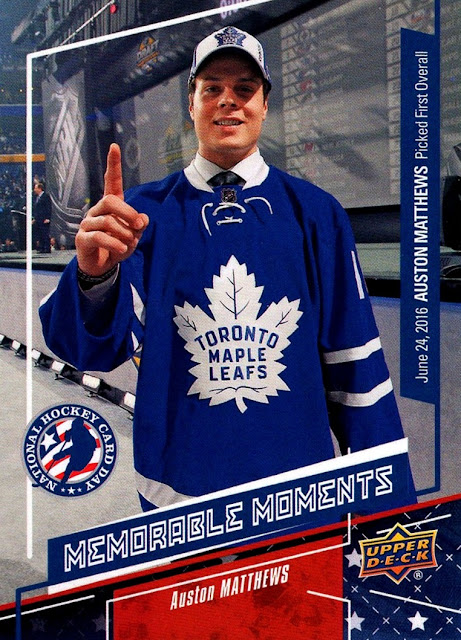 And that's pack #1. If you want to see pack #2, and the basketball cards I got at my trip to the store for these cards, head on over to my own blog, Cardboard History, where I'm going to copy and paste the majority of this post and then build on it.