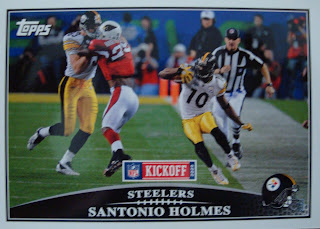 Honestly, these packs aren't that bad for a collector. No you're not going to find a Mark Sanchez autographed rookie card, and you're not going to find some amazing dual game used card, which is why they are only $0.97. Really the only highly coveted insert you can get is a printing plate (1:1, 1,992) What you do get is worth the value at least for curiosity. I got a pretty sweet Santonio Holmes, which features a nice photo of him in the Super Bowl and I like that a lot. My next card was a Stars of The Game insert of DeAngelo Williams. This card probably makes up for the buck that I spent on the pack. 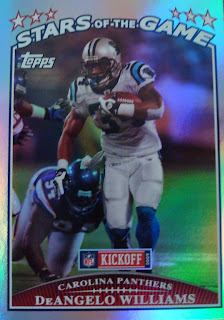 Next I got a Reggie Wayne base set card followed by a Brian Westbrook base set card. These cards feature nice photography. They are obviously cheap cards, but still nice photos. The lettering on them is just white as opposed to the Topps base set, which uses foil lettering, but I don't feel bad about taking my chances on a pack that cost less than a pack of Juicy Fruit. 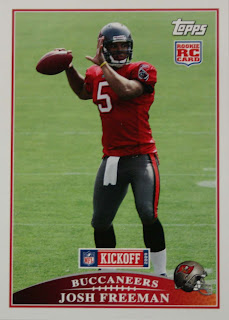 Above is one of my rookie cards (Josh Freeman), who is one of the better rookies I could have pulled. My other rookie was of Ramses Barden a WR for the New York Giants. My expectations for this pack were not very high, but what I received shattered them. A cool insert of DeAngelo Williams and two offensive rookie cards. A pretty nice pick up for a buck. I wouldn't recommend buying these packs too often. I can definitely see how one could be a total waste of money, but if you're at the store and you're looking to spend that last dollar why not pick one up? You never know.