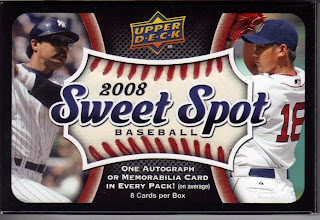 For the sake of helping us achieve our goal of busting at least one pack of every piece of cardboard ever made, I spent more on a single pack of cards than I recall ever spending for a single pack. I know, many people have no problem dropping a 20-spot or more on one pack of cards, but I usually have an issue with that. But, I got paid, and had a little 'extra' in my check this time, so I figured, "What the hey."

The wrapper is silver foil, and SHINY as all get out. We're talking blind you with the sun's reflection and/or get a tan while you bust open a pack of cards shiny here. I'm talking about the kind of shint that makes your wife think you bought some kind of jewelry for her (heh-heh, what a disappointment THAT was - though, not as much as the ensuing lack of response in the romantic department, but I'll save that for...well, never - and, that's what she said! LOL, I kill myself.. Where was I?) 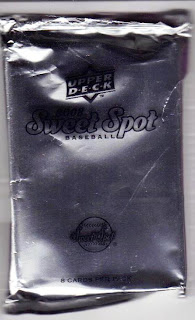 The first card in the pack is BJ Upton (Rays). He's caught watching a ball he just hit sail off into the distance. I'm guessing by his face, it's not of the home-run variety: 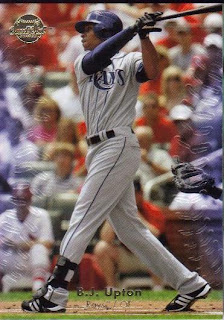 The cards are a little thicker than "regular" cards, but not by much. And, maybe they aren't thicker so much as it is a nicer stock than usual. There is a gold foil "Sweet Spot" logo in the upper corner, a full-card image (no borders here!), and the player's name, team and position are stamped in silver foil at the bottom.

The left and right sides of the card feature a team-related airbrushing effect inside an embossed baseball stitching pattern (like the seams of a baseball, much like the Ovation series had).

The second card in the pack is Felix Hernandez (Mariners). He is about to throw the ball, but I think he's either warming up or tossing an intentional walk. He doesn't look too "into" it: 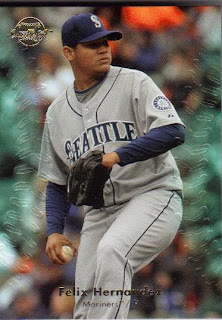 The backs of the cards feature the card number at the top with the team logo under that. The player's bio info is next, followed by a paragraph with info about the player's previous season or some outstanding accomplishment. The sides of the card have the backside of the embossment and feature a photo of a baseball with the red stitching. At the bottom of the card, the player's stats for the past few years (depending on how many years fit below the paragraph. The very bottom of the card features all the official logos, copyrights, disclaimers, etc.

Justin Verlander (Tigers) bats third in the pack. He also has a relaxed look about him. Perhaps the photo said, "Hey, Justin, toss one in for us. We're going to lose our MLB license in two years and we want a nice shot of the logo on the hat. Thanks!": 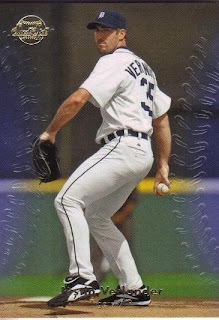 The cards come in a cardboard box, which contains one silver-foil pack. Eight cards in each pack with the "promise" of a game-used or Auto card in every pack. Well, it's not really a promise. It's more like "on average."

The "hit" of the pack (since there were no Tribers in the pack), is the Sweet Swatch Dual Memorabilia card featuring Joe Mauer and Justin Morneau (Twins). I'm digging the pinstripe on Morneau's swatch. Man, if I were a Twins fan...: 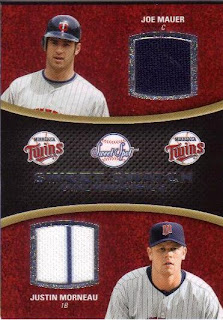 Morneau is described on the back as the "homer-happy first baseman." Just sayin'. Of course, the back congratulates you on getting a G-U memorabilia card without telling you what KIND of game-used item you actually have. Man, card companies have gotten so lazy.

Next up, batting 6th in our line-up (since the previous card had two batters on it), is Adam Dunn (Diamondbacks). This card looks weirdbecause it is not quite a straight-on shot. The photographer is actually slightly below Dunn. I imagine that's from being in the photog pit, or where ever photogs sit during games, but still, it's just enough 'off' to make you go hmmmm: 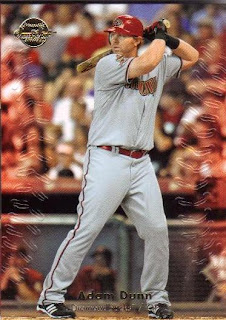 Batting seventh, Atlanta Braves pitcher Tom Glavine. Say what you will, I have always been a Glavine fan. He's just about to let loose, pondering the finer points of retirement: 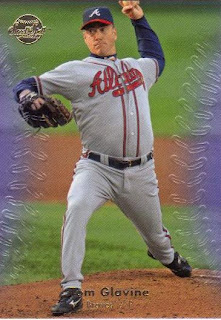 Coming in to bat in the 8th spot, our only horizontal card, Dan Haren (Diamondbacks). He's looking right into the gold foil logo, trying to win a staring contest: 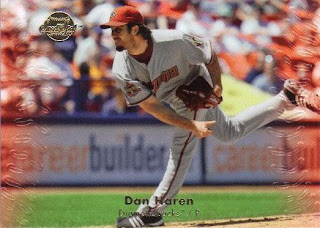 Batting in the ninth and final spot, card #8 in the pack, yes, it is Yet Another Yankee Stadium Legacy Card. This one is of Red Ruffing. Never heard of him. But, "his 36 career home runs rank third all time among pitchers," according to the stats on the back: 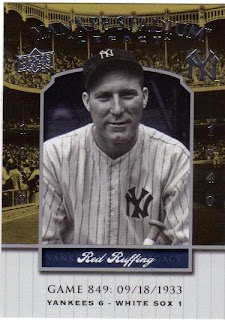 Not a bad selection of players on some nice-looking cards. It's a small price to pay in the name of posterity. These will end up in a future giveaway, I'm sure!

There is a "radio edit" version of this post over on APAD. You should check it out.

I've been eyeing these in Walmart,but I just can't quite pull the trigger !!

It took quite a bit of coaxing, considering the other stuff I could have chosen. Kinda wish I had picked up a blaster box instead, but that's the chance ya take, eh... :-)

I've had two moments of weakness, resulting in two of these finding their way to my house. One spare Yankee jersey and one Dual Jersey of Braun/Fielder. Oh well...

Red Ruffing: highest career ERA of any HOF pitcher, you could look it up. For reals.