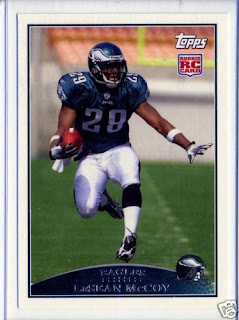 The base Topps set is generally one of the most widely respected and collected sets in the industry. At two bucks per pack it’s a great set to collect. This year over recent years I actually like the base set design. I disliked the black 2007 design and last year’s was just ok, but I really like something about the design this year.

I bought two packs of 2009 Topps football at my local Walmart, which is dreadfully the easiest way for me to get cards these days. In total I received three rookies in each pack. First pack had rookies of : Jason Williams # 381, Jamon Meredith # 377 and Rey Maualuga # 386. In this pack I also received a gold bordered Marc Bulger numbered to 2009. The gold card could have been better and definitely could have been worse, but it’s nice to get one in two packs. The gold bordered cards are randomly inserted in every four packs. 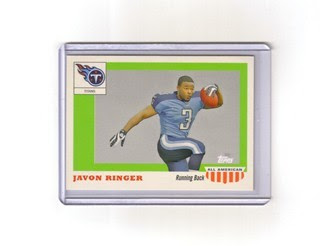 In the second pack I also got three rookie cards, one of which was an All-American insert of Javon Ringer. The All-American inserts are a Walmart exclusive and inserted in every four packs on average. The other two base set rookie cards where; Stephen McGee # 432 and a LeSean McCoy # 400. I like the McCoy rookie card. In fact, I generally like the Topps rookie cards that feature the players in their NFL team uniform and a professional design. Although Score came out before Topps and featured NFL uniform rookie cards it has a borderline childish design, which is also needed in the industry.

Also featured in the packs are one interactive Topps Town cards. I got Trent Edwards and Jamarcus Russell. In all, you get 12 cards; three rookies and a Topps town card, plus eight other commons. I got commons of players like; Reggie Bush, Hines Ward, Brandon Marshall and Greg Jennings.

I generally do not try to complete a set of cards, because every time I try to start it winds up becoming a waste of money. I find it hard to find commons for cheap, because I do not have access to a card shop within thirty miles and when I do they only sometimes have a common box of the set I am looking for. This year is different. I am going to attempt to collect the Topps set. If you have any commons to offer me in a trade for anything let me know, just leave a comment.

Sorry about the editing on the Ringer Photo I didn't notice the white background in my draft.