2007 World of Warcraft Fires of Outland 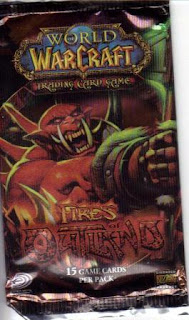 I have never played "WoW" in any incarnation - online or otherwise. I would much rather spend my money on cards and tech gadgets, I guess. That is not a knock against anyone that DOES play, though. The folks at Blizzard figured out the money machine and and they are churning it out!

There are 15 game cards per pack, so I am posting these in pairs. Though, it just now occurred to me that I had an even number of cards to scan. Evidently one is not a "game card."

First up, we have Ash'ergi and Call of the Wild: 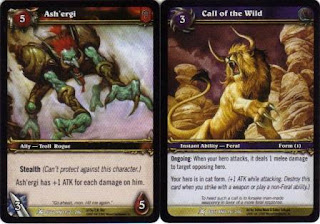 Here, we have One Draenei's Junk (a quest) and Immolate (who is EMulating Rollie Fingers): 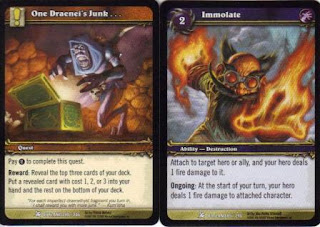 Norrund Grovewater ("There are paths that I walk where you cannot follow.") and Primal Nether code card. Want the code, help yourself if it is still good: 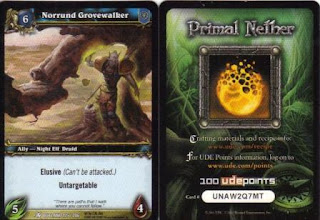 Ozzati ("Flip Ozzati" - I'm not gonna flip Ozzati, YOU flip 'im... I know, let's get Mikey!) and Lessa the Awakener (The Lessa you awakener, the betta!): 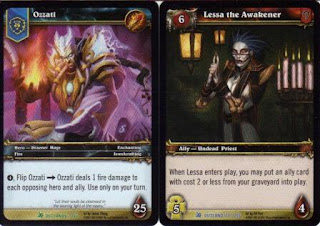 Timbermaw Ally (Aren't those the bowling lanes down on third?) and Snarl Hellwind (which sounds more like a command than a name to me): 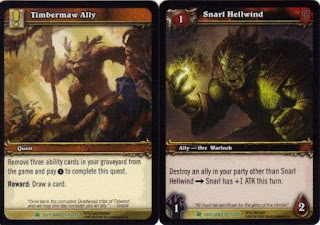 Faesha Firestalker (do not mess with this chick!) and Nalkas (always got to be the young, white-haired guy in RPG fantasy. Diggin the eyebrows, there dude): 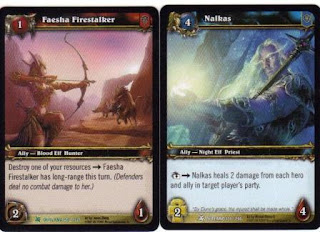 Arcane Blast (I think someone made off with his lucky charms, if you know what I'm sayin') and Silvermoon Sentinels (I tried to understand what this card does, but really, I just got a headache... So you attack yourself?): 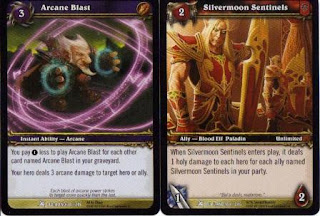 Victory Rush (the proposed joint concert featuring the Jacksons and RUSH, alas it will never be now that MJ has left us) and Exodar Peacekeepers (the anti-Sentinel, evidently): 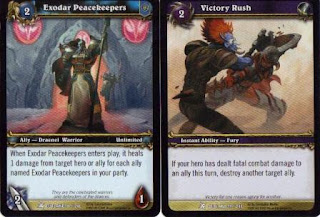 Here is my question: Do people that play the online game also play the TCG? Or is the TCG aimed at people who do NOT play online? Enquiring minds want to know.

Email ThisBlogThis!Share to TwitterShare to FacebookShare to Pinterest
Labels: 2007 World of Warcraft Fires of Outland