Written by Roy at 11:20 AM
This pack of 2007 Topps Updates and HIghlights is from a drastically reduced re-pack you may be able to find at your local Sprawl Mart. Two packs, 12 cards per pack, 24 cards per blister pack. I made a mistake when buying this - mistaking it for 2008. Oh well, at least it wasn't 2006. On with the show: 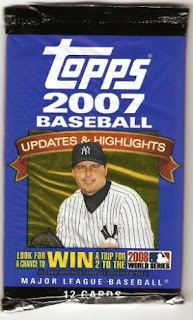 Well, I cannot think of anyone else I would like to see less on a pack of cards. Luckily enough, no Roidger Clemens cards were pulled...this time. 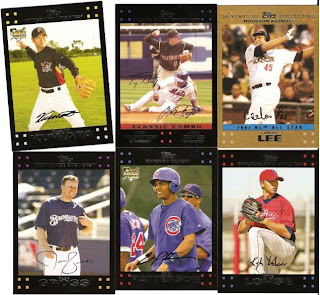 Hopefully you can click to zoom in. I beat the odds with the Carlos Lee, as in a second pack (out of four) I received two gold parallels, the other being of Jason Kendall. So, 1:4 turned into 1:2.

The Details:
UH261 - Carlos Lee Gold Parallel #/2007.
UH175 - Masumi Kuwata Rookie Card [Logo]. Still don't think he's played in the bigs yet.
UH277 - Troy Tulowitzki/Jose Reyes Classic Combo. Definitely the highlight of the pack, for no toher reason than Tulo is on it, and Reyes is totally out.
UH147 - Eric Patterson Rookie Card [Logo]. Blech.
UH204 - Kyle Lohse. Lohse did solid in his Philly season, then went on to a ..ahem.. large contract in St. Louis and had a great year in '08 (15-6, 3.78 ERA) and disappointed many a fantasy team but pooting out a 6-10, 4.74 in 2009.
UH308 - Gabe Gross. Meh. Gross went to Milwaukee in the Overbay trade, and, well, let's call it a draw. Taubenheim never worked out, Overbay was solid and consistent but not spectacular (and now is blocking Brian Dopirak, Adam Lind and Brett Wallace and potentially Travis Snider at first base. Dave Bush has terrifying potential, and almost threw a no hitter one of these past years.) 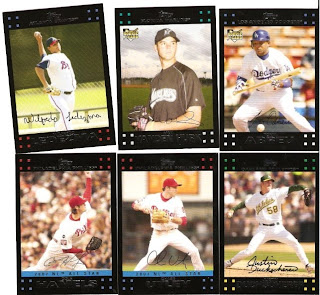 UH39 - Wilfredo Ledesma. I guess this card is only in the set because the Braves acquired him from Detroit in June '07. Big news! His Braves debut was against the Tigres, and then he was shipped back to Venezuela on visa issues.
UH168 - Rick Vanden Hurk Rookie Card [Logo]. Along with Tulo/Reyes, I like this card. I believe Vanden Hurk will be solid someday, not spectacular, but solid. I'm pretty sure the signature says "Hue Ward", though.
UH151 - Tony Abreu Rookie Card [Logo]. Fair enough. I like the (old) rookie logos, but man does Tony look pissed about having to lay down that bunt...which actually looks like a good one. Something I want to see is an oblique shot of a bunt from behind homeplate - complete with pitcher, catcher/umpire, bunter and third basemen all charging. It'd be a sick Turkey Red, probably.
UH240 - Cole Hamels All Star. Held AL batters scoreless in the 4th inning of the '07 All Star game. They must not have hit the ball to Dan Uggla (was he even in that game...?)
UH225 - Chase Utley All Star. On the back: Best First Half Stat: 68 RBIs. Decent.
UH121 - Justin Duchscherer. Yeah, I spelled it without even looking. According to the back, Duchscherer played for Texas in '01. Don't remember that...

So, I know many people don't like '07 Topps or black bordered cards, but I do. That's about all there is to say on that. This set has great rookies, though.

Email ThisBlogThis!Share to TwitterShare to FacebookShare to Pinterest
Labels: 2007 Topps Updates and Highlights