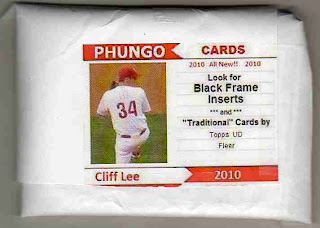 The new set from Phungo, is out and it beat that other release to the punch. This pack arrived only by the Grace of God as the package was heavily abused in transit. The cards themselves are pristine. 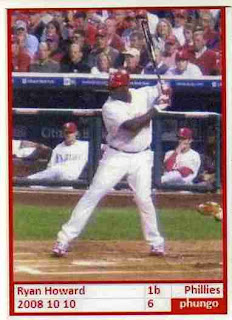 Ryan Howard opens the pack.The date on the card indicates that Ryan was batting in the playoffs on the way to a Title. 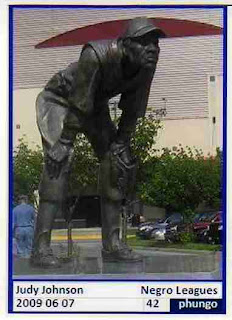 Judy Johnson is a Negro League legend and Hall of Famer. He was a great fielding third baseman who also hit for a career .344 average. Judy was the first African-American coach in the Majors as he coached and scouted for the Phillies from 1954 to 1973. 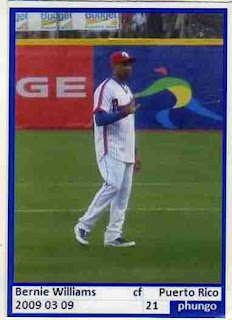 Bernie Williams has his WBC Puerto Rico digs on as he plays in last year's tourney. 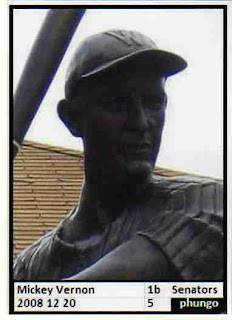 Mickey Vernon was the Washington Senators' first baseman for years and won a couple of batting titles in his career. A great fielder, Mickey is one of those guys who constantly gets mentioned as a possible Hall of Fame inductee every time the Veteran's Comittee meets. 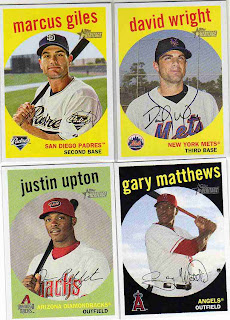 Phungo included some 2008 Topps Heritage "Buybacks"  in the pack, but thatnkfully didn't stamp them with a gaudy gold Phungo logo. 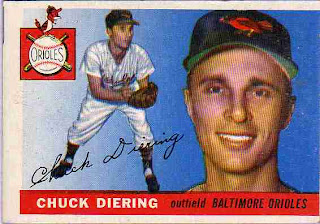 Woooo! '50s cards in my 2010 pack! Someone is trying to tell me to collect this set. Too many 1955 cards have crossed my path recently. 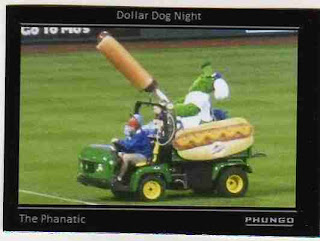 Yay! A black bordered insert of the Phillie Phanatic! It looks like he's shooting hot dogs into the crowd. That is quite the sensible thing to do in Philadelphia. 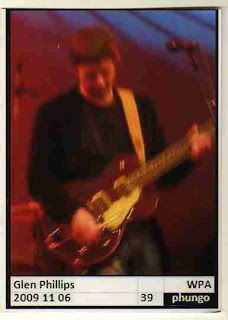 Former Toad The Wet Sprocket frontman Glen Phillips is seen here playing with Works Progress Administration to finish off the pack. Here's Glen's MySpace page if you want to check out his new stuff.

Great stuff, no gimmicks! Keep up the good work Phungo!

Email ThisBlogThis!Share to TwitterShare to FacebookShare to Pinterest
Labels: 2010 Phungo

Ok I will admit that I was the HOF voter here.

No Promises, but I will try try try and get a Braves card in the 2010 set.

Hard to believe, I mean they play the Phils like every other week it seems just haven't seen them the last few yrs.

Great Glen Phillips card. I was a huge Toad fan back in the day. Haven't become as big a fan of his solo stuff though.