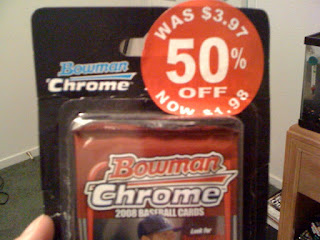 I found this nifty deal at my local WalMart and decided to take a chance. First I want to say that buying last years cards at discounted prices is rarely a bad thing. First off with the Bowman Chromes, you are likely buying for the rookies anyway and the rookies, for the most part hold their value pretty well. Ayway this is what I got in the two packs that I bought (3 cards per pack) 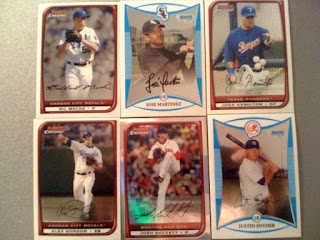 Pack One: #35 Gil Meche, a slightly above average pitcher who has his flashes of brilliance. I remember watching him the M's, so I like him a little more than most. BCP179 Jose Martinez (RC) one of the top prospects in the White Sox organization according to Baseball America. Tall lanky outfielder who should grow into his body and start putting up power numbers. #174 Josh Hamilton Great redemption story. He has become a star in the league and a big time slugger.
Pack Two: #70 Alex Gordon a former No.1 pick he has somewhat underperformed. Compared to Ryan Zimmerman and Evan Longoria, Alex Gordon looks to be a tier-two third baseman, but I think he is still a solid player and will eventually put up big numbers. #76 Josh Beckett (Refractor) Nice! A refractor. I love refractors. Josh Beckett is one of the best pitchers in the game. Although I don't really like the Red Sox, it's not a bad pull by any means. My refractor could have been of Gil Meche, so I'll take it. BCP181 Justin Snyder (RC) Drafted in the 21st round of the '07 draft by the New York Yankees, Snyder hit .335 for Staten Island in '07 and is a scrappy hitter with a feel for the strike zone.