Written by Community Gum at 11:33 AM
I'm not much of a boxing guy, but if we're going to open a pack of everything on here, sometimes you have to bust some wax you normally wouldn't. This actually came in one of those 700+ pack lots that we won from Kruk Cards and used for our Dawson Hunt contest several months ago. In general, the lot was full of a bunch of junk, but that junk is your treasure as we get to feature them here. Let's rip. 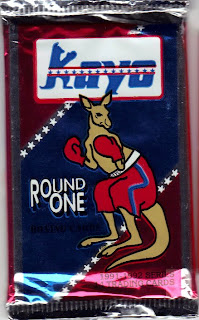 Of course the boxing cards use a Kangaroo as a mascot of sorts. It should remind me of Looney Tunes, but instead I'm reminded of the great, overlooked Atari 2600 game "Kangaroo." Anyway, I'll try to look past the cliche when looking through the 14 cards.

The back says the set is 250 cards long and we can find special holograms and autographed cards, although no odds are given. Oh, and since this is boxing, everyone must have a nickname. Whether they're real or not, I'm going to give them one. 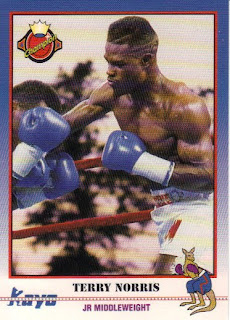 #020 - "Terrible Fade" Terry Norris - I'll probably say this about everyone, but I've never heard of him. Research tells me "Terrible" Terry (real nickname) beat Sugar Ray Leonard at one point in his career in order to retain the super welterweight title. He also won a $7.5M settlement against Don King in 2005 and was elected to the Boxing Hall of Fame that same year. What I do know is that hair is amazing and it looks like they're fighting in the tree tops. 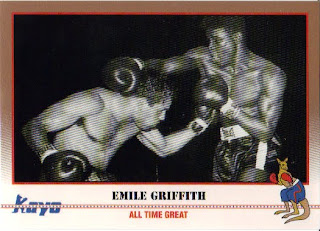 #070 - Emile "Don't call me Zola" Griffith - The card glances over the fact that he fought Benny "Kid" Paret, which essentially killed him. Griffith knocked him unconscious and Paret died ten days later, never waking up. He was also nearly beaten to death in 1992 after leaving a gay nightclub, assumedly by some homophobic people. 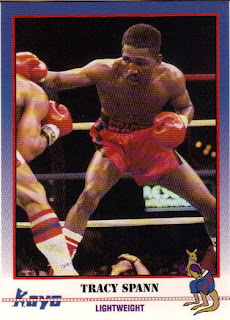 #242 - Tracy "Double N" Spann - As of this card, Spann was 26-0 with 20 KOs. Not too bad, but he doesn't have the champion logo on his card. I like the lady covering her head at the bottom of the frame. Something about Spann's crouch mixed with the covering of the head is quite amusing to me. Draw your own conclusions. 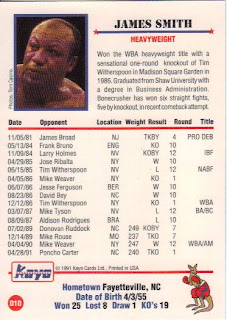 #010 - James "Jimmy Bland Name" Smith - These backs are well-designed. There's a nice full color headshot (which is different from the front), a short bio and a comprehensive fight results chart. This guy, however, is not as impressive as the card back. 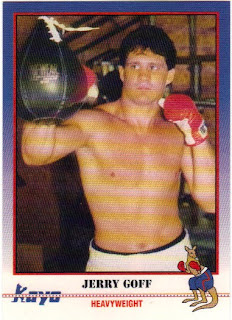 #181 - Jerry "Hassel"Goff - The back of his card shows 7 first round KOs, which sounds pretty impressive, but since I don't know any boxing names except for the biggest of the big, it probably is nothing. This is a pretty sweet posed action shot, though. 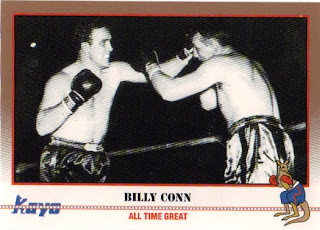 #175 - Billy "Ecticut" Conn - I haven't even heard of this guy, but I have heard of Joe Louis, and Conn beat Louis twice for the title. Maybe I need to read up a little more on this sport. 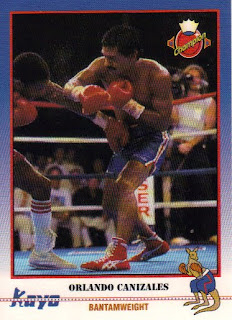 #008 - Orlando "Cannibal" Canizales - Another Champion logo. One thing that kept me from becoming more interested in boxing was the confusing weight classes and titles and belts and crowns and logos. I'm also a lover, not a fighter. But if I were a fighter, I'd probably go for the crotch like Canizales' opponent is here. 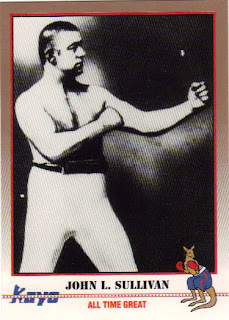 #208 - "The Great Potato Bag" John L. Sulivan - Yes! This is what I think of when I think boxing. His saying was "I can lick any man in the house." Now, don't even think about making fun of him for saying that. This dude was hardcore. He won a 75 round bare knuckle fight in 1889. He was a semi-pro basketball player as well. If Sully wants to lick you, you let him lick you. 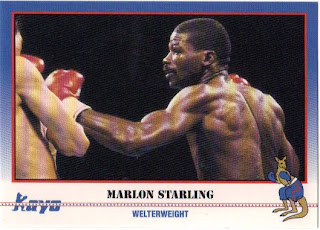 #195 - "Makeshift Carl Weathers" Marlon Starling - At first glance, I though this was Carl Weathers as Apollo Creed in cardboard form. Then I saw it wasn't. He is a champion, but he doesn't have the logo, so I have no idea how that works in this set anymore. 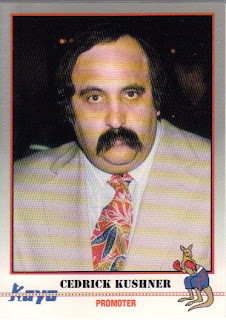 #184 - "Smiley McFreemustacherides" Cedrick Kushner - Yikes. This guy promoted rock bands before getting into boxing. Evidently this picture doesn't capture his charm, since he promotes 7 world champions including Starling and Canizales, which were also in this pack! 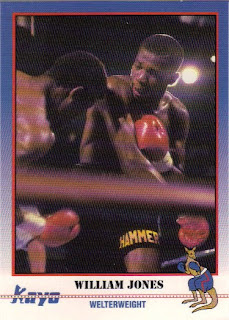 #230 - William "Pliers" Jones - I'd say this is the front-runner for best picture in the pack. The follow through. The "Hammer" nickname on the shorts. The beaming light behind his head. The rope cutting through the frame. Very nice. 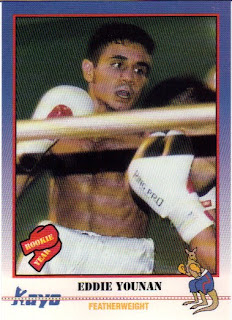 #226 - Eddie "Societal Pressures Drove Me Into This" Younan - Ooh, a rookie card logo. I wonder if Beckett recognizes this as an official rookie card now. 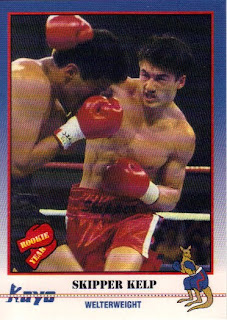 #003 - Skipper "David" Kelp - Another rookie! With a name like that, he has to be a fighter, or a baseball player. 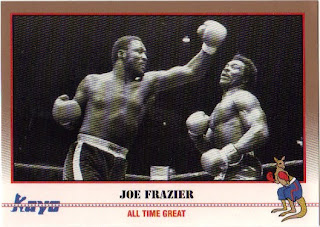 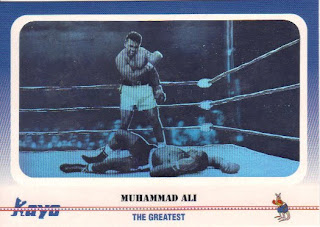 What do the boxing fans think of this set? I don't think there was a Round Two, but I do like the professionalism and design of this original release.

Email ThisBlogThis!Share to TwitterShare to FacebookShare to Pinterest
Labels: 1991-1992 Kayo Boxing Round One

I LOL'd like 5 times during this pack. My favorite nickname award goes to Ecticut. Brilliant, Jon! -Andy

You had me cracking up reading this one. "I'm also a lover, not a fighter. But if I were a fighter, I'd probably go for the crotch like Canizales' opponent is here." - HA~!

Oh, and nice callback on Kangaroo for Atari. That WAS an awesome game at the time!