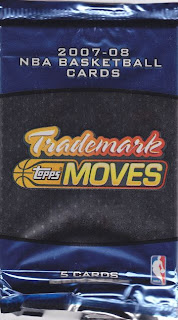 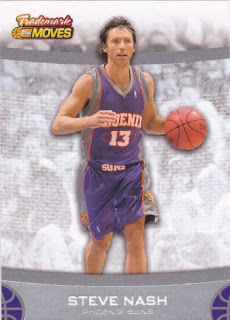 13 - Steve Nash (One argument against getting a new flatscreen TV is the prospect of seeing Steve Nash's face in high definition in my home at least 4 times a year. The Blazers took care of Phoenix for the second time this season tonight, though, which is good.) 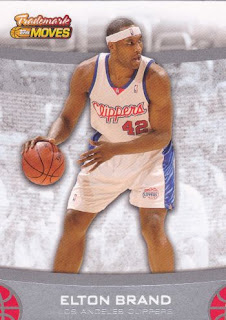 2 - Elton Brand (The only Trademark Move Elton Brand has is to the bank to cash his enormous checks each week. Okay, fine... NBA players probably don't have their own checks to cash or get paid by the week.) 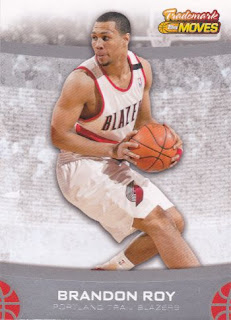 6 - Brandon Roy (I think Brandon Roy's future might be as a point guard. He's apparently lost the mobility he once had with his arthritic knee issues, but I think he's smart enough to play a long time and contribute in other ways. Besides, it's not as if Nash or Jason Kidd thrive off of their amazing vertical leaping abilities or anything.) 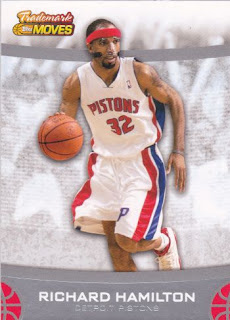 8 - Richard Hamilton (We all know Hamilton sleeps with his mask on each night, but did you know he also wears it at the breakfast table? "Hey, Rip, aren't you gonna finish your oatmeal?" "NARRRRRRRR!!!!") 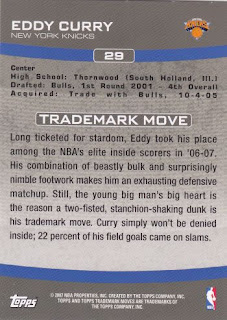 29 - Eddy Curry (Yeah, a boring, lifeless card design begets an equally dull card back. No stats? Way to mail it in, Topps. Maybe this is why you can't make basketball cards anymore.)

Actually, Brand is having a good year for the Sixers. One of the few highlights on the club.