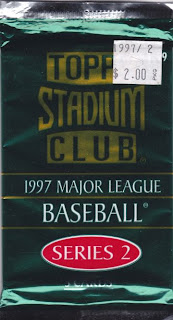 1997 was the year that Stadium Club went... well... even more "premium". Fewer cards per pack, thicker stock, and each player name in a raised metallic swoosh were the highlights of this year's Stadium Club. They seemed to go in more of a minimalist direction with the wrappers, however. I, for one, can appreciate a good, clean pack wrapper. 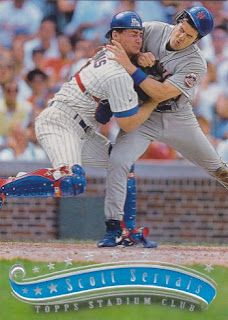 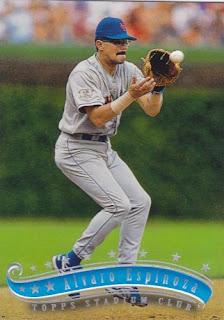 314 - Alvaro Espinoza (Alvaro's choice of eyeglasses and facial hair just recently came into popularity with the hipster set. He was a little ahead of his time.) 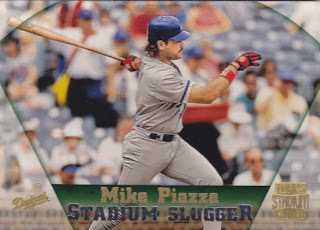 383 - Mike Piazza Stadium Slugger (A 1:3 pack insert in a pack that only contains 5 cards? I'm guessing this probably isn't very rare. You could do a lot worse than Mike Piazza, however.) 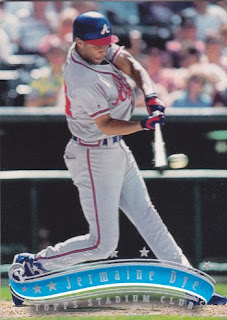 351 - Jermaine Dye (I love the photos where you can see the baseball suspended in the air.) 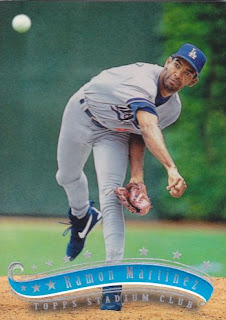 205 - Ramon Martinez (Despite still being the Dodgers ace at this point, Ramon will forever be known as the Wrong Martinez... as in, the Dodgers kept the wrong Martinez.)
- Free TSC Membership card

You can't go wrong with a play at the plate...especially one that includes a forearm shiver.

I wouldn't doubt if the first two cards were from the same game.