Written by Community Gum at 11:37 AM
The Beatles are finally on iTunes. Woopee. Evidently this is big news for those that A) haven't already downloaded mp3s illegally from other sources and/or B) use iTunes. Since I can't really claim either camp, I could care less. I'm probably one of three people aged 30 or under that haven't bought anything on that program. 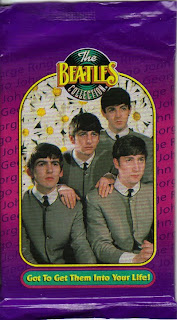 Don't they look thrilled in front of all those pretty flowers? Such a nice welcome to this pack of cards. 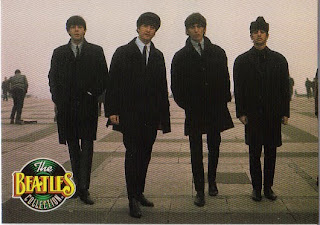 #62 - Off-Stage - The back relates a little anecdote and seems to have nothing to do with the picture on the front. I don't really know where they are in this picture, but the certainly are not on the stage, so the card gets that right. Also, Ringo's hat is pretty bad-ass. 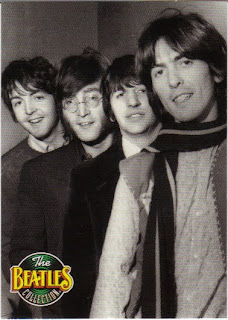 #202 - Off-Stage - Ohhhh, I get it. The titles aren't really titles. That's lame. How hard would it be to give a descriptive title. At least this card tells us that the picture was taken in 1968 around the release of "Lady Madonna"/"The Inner Light." 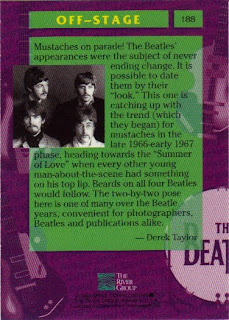 #188 - Off-Stage - I'll show you the back here. See that inset picture? The front of the card is the right half with Ringo and John. By the way, look at that first sentence. Mustaches on parade! There's your card title - not "off-stage." 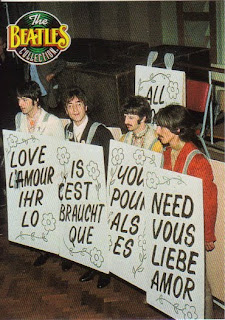 #170 - On-Stage - Hmmmm, they don't look like they're on-stage. This is actually from a TV appearance. The concept of the sandwich boards is a good one. Although I think they need Pete Best back to wear the "All" sign. 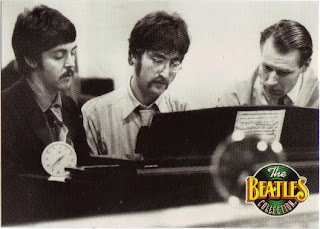 #197 - On-Stage - Why not have a category "In the Studio?" No, Paul isn't pulling a Flava Flav. The alarm clock you see was the one used in "A Day in the Life." And, yes, I referenced Public Enemy in a Beatles pack break. What of it? Welcome to the Terrordome. 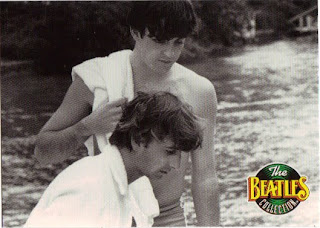 #63 - Off-Stage - Here they are in Miami Beach, supposedly. The card talks about frolicking in a hotel pool, but this looks more like looking at something in a flooded town. 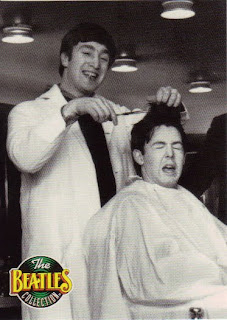 #23 - Off-Stage - Easily the best picture I've seen. Don't we all have pictures like this from our days growing up? Us crying in the barber's chair with a sadistic rock star cutting your hair behind you. 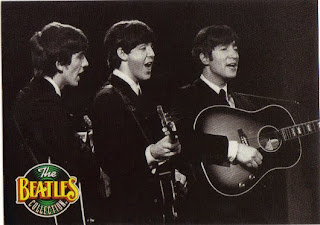 #79 - On-Stage - Oh, a legitimate performance picture. I guess I can't complain too much. If you're getting a set like this, you probably want more behind the scenes type shots. This card talks about the Beatles folk/acoustic inspirations. 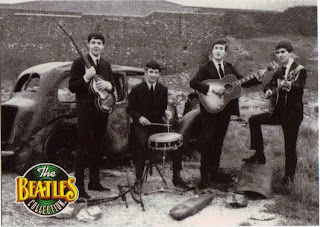 #7 - Off-Stage - Here they are kicking off their apocolyptic junkyard tour. Actually it's an early publicity picture taken where "beetles" would be found. Intersting concept, even if it doesn't come across without being told. 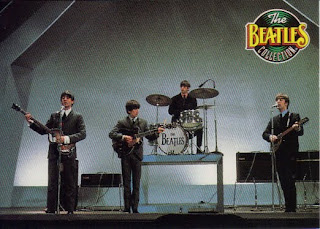 #56 - On-Stage - And we end with our third consecutive guitars-being-held photo. I don't know what performance this is from. The card back just talks about the whirlwind pace in which they became popular, bouncing from one TV appearance to another.

The set lacks a certain amount of pizazz, but I'm willing to bet that big Beatle fans would like a binder full of these things. I can appreciate that the set isn't all about the classic imagery that we all know already. But, considering the laziness of matching the fronts to the backs and the lack of good card titles, I would probably not seek these out unless I was a die hard fan.