Written by JediJeff at 6:43 PM
When all is said and done, it really should be me ripping and opening a pack with "heroes" in the name. 2013 Panini Hometown Heroes is a jumbo packs only release - you get a handful of cards with each purchase. We have the usual lack of logos, but it's such a fun set that most of the cards don't bother me. 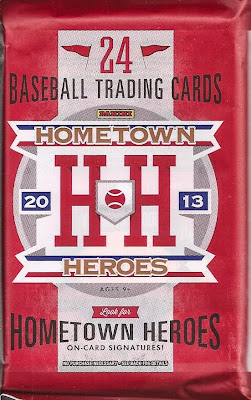 Such a good retro-ish look to the wrapper. 24 cards in a pack and inserts galore. I'm not up for 24 scans, so let's triple our eye candy with each pass of the scanner.

With the pennant, you have the feel of 1965 Topps, but the background has a bit of '58 in it. Throw the bright colors of Delong Gum and here you have '13 Hometown Heroes. Good mix of current with some of the 2nd tier stars of the late 60's through today.

Case in point. When is the last time Walton, Samuel or Coleman had a release in a set? The lack of logos is pretty evident, as well as a city only designation for each player.

The La Russa is one of the few where the lack of a full MLB license can produce a really bad card.

Andre Thornton. Does it get more B "celebrity" than that?

There are times I wonder who was cropping these pictures. Sheets, Heyward (and Utley in the last group) are way too far left and it feels like the card will topple over.

Hit the Yankee New York trifecta with those three cards.

Sorry LA fans - get your own Lopes. Here are a couple backs. 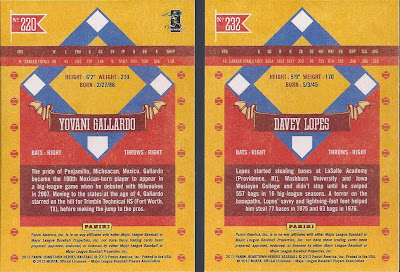 As you see, it doesn't matter your length of MLB service, you get one line of your career totals with a nice bio paragraph. So that is the base of the pack. Of the packs I have bought, it seems to be 21 base and 3 inserts. The inserts for this pack... 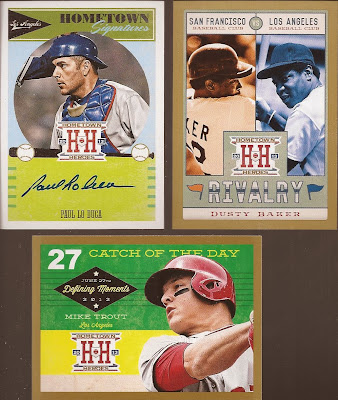 I have bought 9 packs (10 to a box) and have pulled a total of 4 autographs. They come three to a box, so I am ahead of the odds. Some autographs are stickers, but a far amount are hard signed. I like this set. I hope to complete it via dime boxes. Nick - let me know where you find some.

I hope these are available at Target !